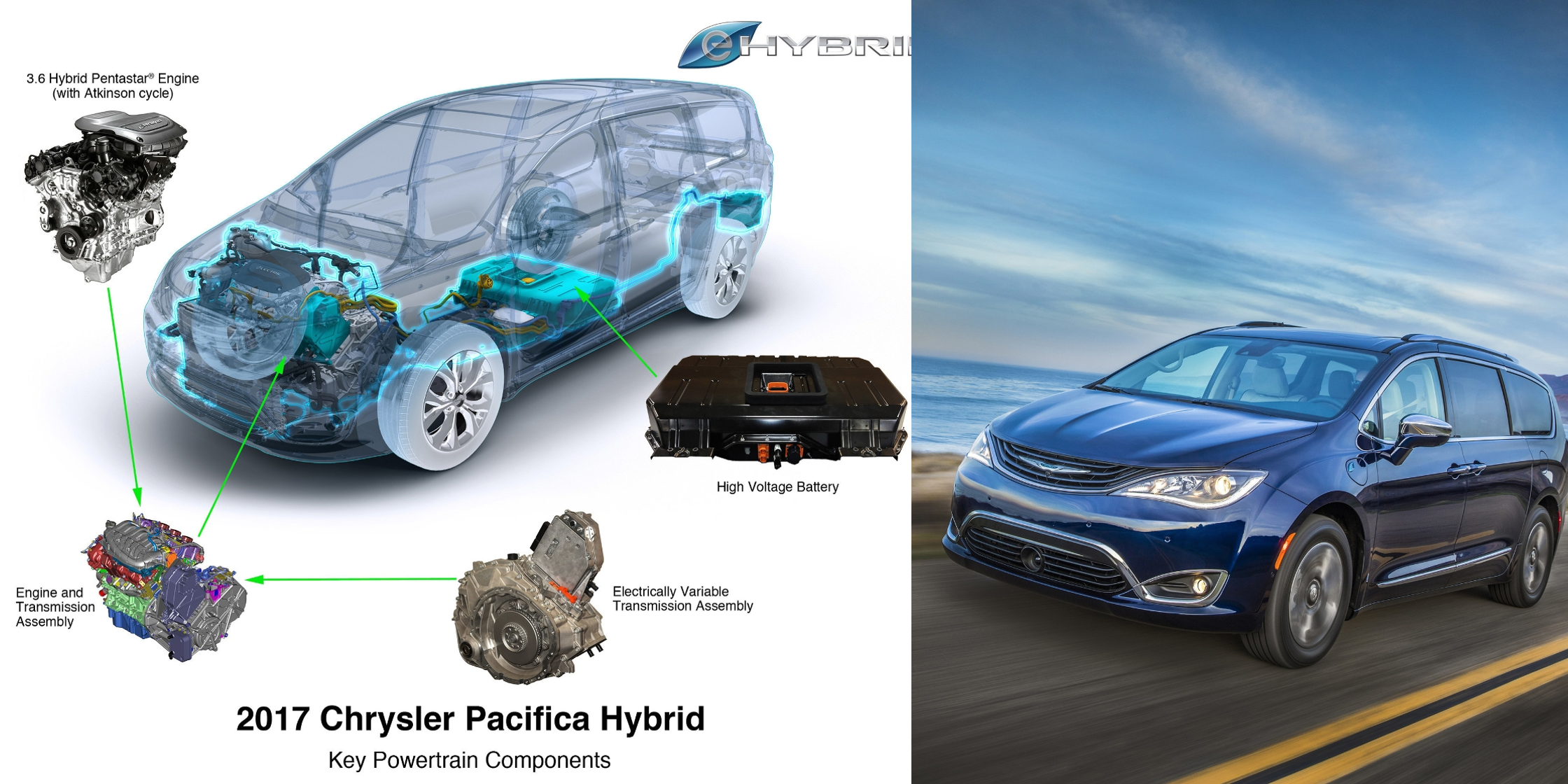 If you want a minivan and don’t want to burn fossil fuels to get around, your options are extremely limited currently. You could obviously buy a very expensive Tesla Model X which ticks off a lot of the minivan features and adds a bunch of sports sedan goodies. But that sticker price of $75K is going to eliminate a broad swath of the population. From there, your options are all but nothing. You could squeeze into a Kia Soul EV which seats 5 and is a little higher off the ground than a typical car but at this point, you’d be better served to (head to the West Coast) and buy a Chevy Bolt with its 238-mile range.

This is where the Chrysler Pacifica steps in. Introduced almost a year ago from the inventor of the minivan comes a Plug-in Hybrid version of the popular Pacifica high end mini-van. This hybrid was touted as having 30 miles of range on electric only before its 500+ mile range with ICE kicked in.

Some good news on that front…

The EPA yesterday increased the range of the Pacifica in EV only mode 3 miles to 33 total. That’s a full drop off the kids commute for a lot of people and with the $35,000 base price after $7500 Federal Tax Credit – which Fiat Chrysler won’t be running out of anytime soon, presents a very real world option for minivan buyers who aren’t trying to destroy the planet.

I know my fellow EV advocates often scoff at plug-in EVs with low range, but frankly it is better than nothing – which is the current status of EV Minivans.

The press releases also notes a 84MPGe (4MPGe over estimates) is a benchmark for Minivans and calls the Pacifica the most fuel-efficient minivan ever but only if you don’t consider Tesla’s Model X and its low 90s MPGe a minivan.  The Pacifica also got the “best-possible rating – 10 – in EPA’s Green Vehicle Guide; first time a minivan has ever reached this plateau”.

Google will also likely be happy to hear about the improved numbers on the Pacifica, as it is deploying the vehicles through its partnership with Fiat-Chrysler to build a fleet of self-driving Pacificas.

I think Chrysler could have done something similar to the BMW i8 and had a petrol-powered front end and an EV back end with the option to go 4 wheel drive–which a lot of minivan owners like, for instance in the Toyota Sienna.  Instead, they opted for the “e-Flite EVT technology… distinguished by dual-motor/one-way clutch strategy” which looks similar to the very good in a general purpose 2016 Chevy Volt system.

We’re looking forward to a test drive of this thing to see how far we can really get on EV-only and if this is truly a minivan we can get behind. No other minivan has ever come close to this rating.

The new benchmark reflects the Pacifica Hybrid’s combined city- and highway-cycle performance in electric-only mode, as tested by the EPA. FCA US had estimated the vehicle would achieve 80 MPGe, which represents the distance a vehicle can travel using a quantity of fuel with the same energy content as a gallon of gasoline.

“At 84 MPGe, the all-new 2017 Chrysler Pacifica Hybrid surpasses our initially stated performance,” said Tim Kuniskis, FCA US LLC Head of Passenger Car Brands – Dodge, SRT, Chrysler and Fiat. “These EPA test results paint a clear picture of the benefits our customers can expect from driving the most fuel-efficient minivan ever.”

In addition, the EPA gave the all-new minivan a rating of 10 in its Green Vehicle Guide. The score relates to a vehicle’s combined performance on fuel economy and greenhouse-gas emissions.

Further, it marks the first time a minivan has achieved a 10 – the highest possible rating – in this category.

Such performance firmly establishes the 2017 Chrysler Pacifica Hybrid as the most fuel-efficient minivan of all time.

e-Flite, the Pacifica Hybrid’s distinguishing technology, is an in-house FCA US innovation. It was developed by a team of engineers assigned exclusively to the task of delivering powertrain efficiency within the functionality envelope customers expect from minivans.

“It is exceptionally well-suited to deliver the primary attributes we sought to infuse in the Pacifica Hybrid’s propulsion system – class-leading efficiency and superior refinement,” added Lee, who also oversees the Company’s global powertrain operations.

The result is increased efficiency, refinement and improved component packaging.

The Pacifica Hybrid’s 16-kWh lithium-ion battery pack is located under the second-row floor, keeping the rear cargo area as roomy as ever and preserving the third-row Stow ‘n Go seating and storage, plus room for seven passengers. Recharging can take as little as two hours using a 240-volt (Level 2) charger, available from Mopar through dealers.

With a 120-volt (Level 1) charger, which comes standard with the vehicle, the Pacifica Hybrid can be fully recharged in approximately 14 hours. The vehicle also benefits from regenerative braking.

When the battery’s energy is depleted to a certain threshold, the Pacifica Hybrid becomes a part-time electric vehicle, like a conventional hybrid, to maximize energy and efficiency. Power to the wheels is supplied by the electric drive system or supplemented by a specially adapted new version of the award-winning gasoline-powered Pentastar 3.6-liter V-6.

The EPA estimates the 2017 Chrysler Pacifica Hybrid’s annual fuel cost, gas and electricity combined, at $900. The vehicle starts at $34,495 with available U.S. federal tax credit, not including state and local incentives.