We haven’t talked about Ford’s electric vehicle programs for a while now. That’s because there isn’t much to talk about. The company has fallen behind the competition when it comes to 200+ miles electric vehicles to compete with the likes of the Tesla Model 3 or the Chevy Bolt EV coming next year since its own entry in the segment is only planned for 2019.

Late last year, Ford announced a $4.5 billion investment in EV technology and 13 new electric models coming to its lineup by 2020, but we haven’t really seen the fruit of the investment just yet.

Though Ford hasn’t fallen behind for the current generation of mid-range electric vehicles with its new 2017 Ford Focus Electric. The vehicle mostly went under the radar, but the company has confirmed a 33.5 kWh battery pack for an EPA-rated range of 115 miles on a single charge.

It should keep the vehicle competitive with other EVs that received a battery upgraded over the last year like the BMW i3, VW e-Golf and the Nissan LEAF.

I say that it went mostly under the radar since Ford hasn’t talked about the car much other than Kevin Layden, Ford’s director of electrification programs and engineering, confirming back in April that the 2017 version of the Focus Electric will get a range boost to “over 100-mile range” – up from the 2016 model’s 76 miles.

Ford hasn’t been promoting the vehicle since, but they brought a model to the Los Angeles Auto Show this week – though it was apparently almost hidden.

Electrek reader Kent Steinbrenner was at the show looking for the Focus Electric last Saturday and told us:

“I finally found it, along with all of the other Energi models, hiding behind a partition along one wall of their exhibit. Why would they tuck those cars away like that? Anyway, lo and behold, they had a 2017 Focus Electric there—what looked to be a production model—with a Monroney sticker on display, although with no pricing and a note on it saying “This Vehicle Not for Sale.”

Here’s the sticker in question: 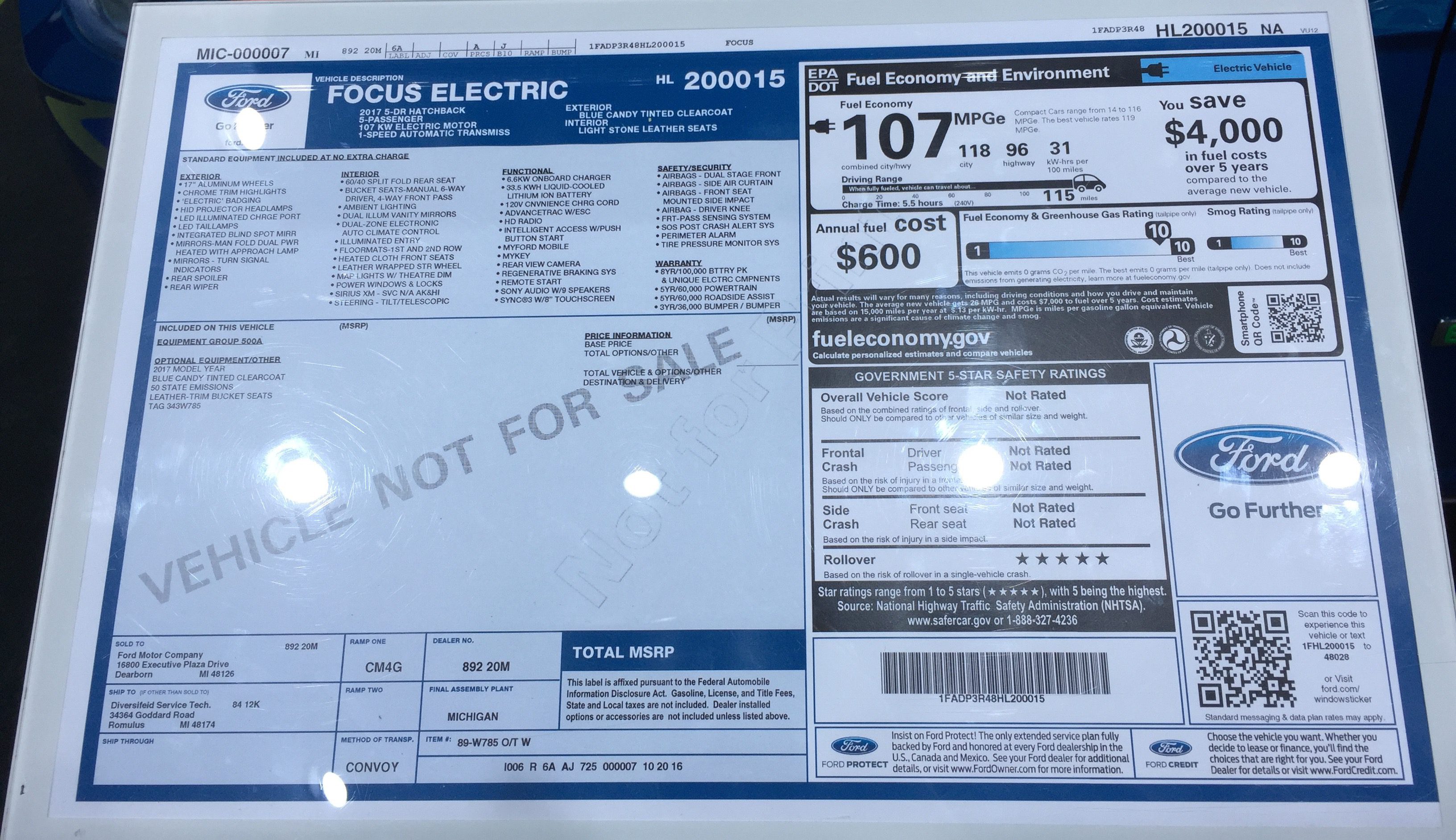 It shows in EPA-rated range of 115 miles despite the agency not having officially released those estimates yet.

The spec list also shows the new battery pack with a 33.5 kWh energy capacity – up from the 23 kWh of the 2016 version of the Focus Electric.

It is equipped with the same 107 kW electric motor, according to the same spec sheet.

A welcomed addition to the 2017 model is the DC fast-charge capability being standard.

Last month, Ford released the B-roll of the 2017 version and the design appears unchanged:

Ford should start shipping the vehicle by the end of the year and it is listing the same MSRP of $29,120 as the 2016 version on its website. Around the same base price and with a signficant range increase, the 2017 version could prove popular.