As new vehicles are coming off the assembly in Fremont right now, Tesla is making the transition from its first generation Autopilot hardware to its second generation hardware in order to gradually enable level 3 and 4 autonomous driving, and eventually fully self-driving capability, according to the automaker.

As we discussed in the past, the industry is skeptical of Tesla’s ability to deliver a fully self-driving level 5 system with its new hardware suite, but there’s a reason Tesla is confident in its ability to deliver such a system. The reason is data.

Electrek has learned that Tesla has now accumulated 1.3 billion miles of Autopilot data from its first generation sensor suite and “nearly all of it” is useful to the second generation Autopilot, according to the company.

We reported last month that Tesla’s fleet has reached 3 billion miles driven and Tesla confirmed to Electrek last week that 1.3 billion of those miles were driven by Tesla vehicles with Autopilot hardware.

To be clear, those are not miles driven on Autopilot (with Autosteer and TACC), but miles driven in cars with Autopilot first generation hardware. Tesla still uses the data even when the Autopilot is not active in order to feed its machine learning system and improve its Autopilot programs: Autopilot, Enhanced Autopilot, and Full Self-Driving Capability.

The actual number of miles driven with the Autopilot active is closer to 300 million miles at this point.

In comparison, Tesla disclosed that it accumulated 780 million miles driven on hardware-equipped cars and ~100 million with Autopilot active back in May 2016:

During the same presentation pictured above, Tesla’s Director of Autopilot Programs, Sterling Anderson, described how Tesla makes use of the hardware in its development process even if the Autopilot is not active:

“We first install (the Autopilot system) in a logging fashion across 70,000 vehicles. We watch over 10’s of millions of miles with the new (Autopilot) features not turned on. We only turn it on when we know it is empirically safer.”

The Autopilot first generation fleet is now over 100,000 vehicles strong and while Tesla is now transitioning to its second generation hardware, the development process remains mostly the same: 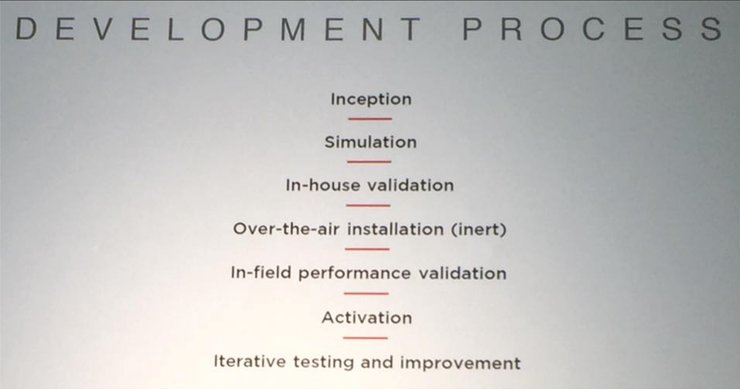 As we reported before, Tesla is now gathering more data from autonomous miles driven in a day than Google’s program has logged since its inception in 2009, but the two companies are gathering fairly different datasets.

Tesla’s sensor suite has so far been much lighter than Google’s, but that is now changing with the second generation sensor suite making its way to customers now. As of the end of October 2016, Google had accumulated about 3.5 million miles of data  (2.2 million autonomous and 1.3 million manual miles) and it is adding about 25,000 miles per week with a fleet of just over 50 prototypes.

On the other hand, Tesla is now adding millions of miles every day from its first gen Autopilot. The second generation, which aims to be fully self-driving like Google’s, should catch up with the first generation in term of data gathering during the second half of 2017, but with a much greater scope of information with now 360-degree camera coverage powered by ‘Tesla Vision’, as well as better ultrasonics and Tesla’s new radar technology.

To be fair with Google, while the Mountain View company doesn’t have access to a large fleet to collect similar data like Tesla, it does add 3 million “simulated-miles”  a day without leaving the lab.

Tesla CEO Elon Musk previously mentioned that Tesla and other companies developing self-driving systems would need billions of miles worth of data in order to convince regulators that a system is safe. It looks like the company is well on its way, but it still has to circle the earth (24,860 miles) or go to Mars and back a few more times (225 million miles).

Featured image: via Steve Jurvetson, partner at Draper Fisher Jurvetson and Tesla board member (via Twitter and Facebook).