We recently reported that Tesla is not able to meet the demand for service in Denmark after deliveries surged following the phasing out of its tax break for electric vehicles by the end of 2015. While not great for EVs in the mid to long-term, it propelled Tesla’s Model S to become the best-selling vehicle in the country at the end of the year.

Tesla’s sales in Denmark have since virtually vanished, but the thousands of vehicles still need to be serviced. Now Tesla is having difficulty keeping up and former employees decided to set up shop in order to independently service owners, but they report facing roadblocks from Tesla.

Emil Ellefsen, a former delivery specialist at Tesla, decided to leave the automaker in May 2015 – just ahead of the surge in deliveries – in order to start a body shop and service center aimed at servicing Tesla vehicles. The shop is called Autoskadestuen A/S.

He partnered up with Henrik Tidemand Jorgensen, a Tesla-trained technician and mechanic. Jorgensen was working at Tesla’s only approved body shop in the country (at the time) before partnering with Ellefsen.

They thought they would be able to invest in their own shop and get Tesla’s accreditation in order to be able to buy parts and get access to the necessary literature, but they are instead describing Tesla has blocking them from getting access and service their customers.

Here’s a few pictures of the shop (courtesy of Emil Ellefsen):

While they first set up the shop to do body work on Tesla vehicles (Ellefsen says that about 80% of their customers are Tesla owners), the shop has since also branched out to regular service in order to help out owners frustrated with the long wait times Tesla has been experiencing in Denmark, as we reported earlier this month.

Tesla operates only two service centers in Denmark, but the company says that it is working to double the capacity of the centers by the end of the year.

More importantly, he would get access to parts at a 30% discount on the regular sales price. While he should technically be able to get parts without being a ‘Tesla Approved Body Shop’, though without the discount, Ellefsen told us that he placed orders 5 weeks ago on parts he still hasn’t received. He estimates a ‘Tesla Approved Body Shop’ would have received the parts in 3 to 5 days.

At the time of their application last year, Tesla had only one ‘Tesla Approved Body Shop’ in Copenhagen, but it approved two more since Autoskadestuen A/S’s application has been refused.

In an email to their lawyer, Tesla’s Body Repair Program Manager, Andy MacDonald, says that Tesla thinks it reached capacity in the market and that it reserves the right to choose the body shops to appoint: 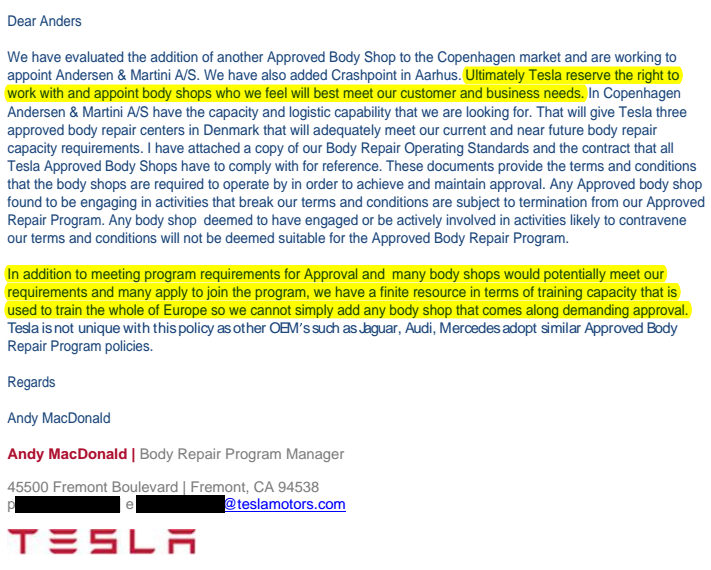 Additionally, he says that Tesla cannot add too many shops because they have “a finite resource in terms of training capacity that is used to train the whole of Europe.” Ellefsen argues that it shouldn’t apply to them since they already have people on staff that went through Tesla’s program.

Ellefsen wrote to us:

“One of the big issues with regards to this, is that at the same time as they are stalling our attempt to become a Tesla approved body shop and to get the computer, they are saying to the news papers and the competition authority, that they are following the rules and that anybody can “pay and join” the body shop program. Thus severely hurting their own credibility.”

The confusion appears to arise from the difference between the previously mentioned service program, which would be the “pay and join” program referred to by Tesla, and the full body repair shop program, which include the collision repair manuals and allows access to the parts and discount.

In the US, Tesla uses the former to comply with the “Right to Repair” law in Massachusetts.

Ellefsen argues that the practice goes against the rules of the Danish Competition and Consumer Authority. His lawyer cites the following section (translated):

According to the Commission in 2010 under “C 138/05” IN ANSWER “Supplementary guidelines on vertical restraints in agreements for the sale and repair of motor vehicles and the distribution of spare parts for motor vehicles”.

Independent service workshops are entitled to have access to purchasing components that are needed to perform repair or service the motor vehicle. Furthermore, independent service workshops entitled to the necessary technical information for the repair and maintenance of motor vehicles. This concept should be understood broadly so as to include also includes tools, diagnostic and other repair tools, together with related software, including periodic updates thereof, and after-sales servicing this tool.

They are now petitioning the authority to make Tesla comply to the rule. It will be interesting to see if it will impact Tesla’s repair and service program.

Would you like to see a more opened Tesla repair and service program?