As always, a healthy dose of skepticism is important when it comes to an alleged “battery breakthrough”. Those announcements are being made every 2-3 months over the last decade and rarely anything comes to it, but at least we can always rely on the 5-8% annual incremental improvements in li-ion battery capacity. It’s not a “breakthrough” or doubling of capacity, but it adds up.

Now it’s time for another MIT spinout, after the defunct A123 Systems, to claim to have created the next battery breakthrough with an anode-free li-metal battery that could achieve an energy density of up to 500 Wh/kg – about twice the capacity of the current cells found in Tesla’s vehicles for example.

The claims come from SolidEnergy, a company created in 2012 by MIT alumnus and former postdoc Qichao Hu ’07.

Hu explained his concept to the MIT News Office:

The battery essentially swaps out a common battery anode material, graphite, for very thin, high-energy lithium-metal foil, which can hold more ions — and, therefore, provide more energy capacity. Chemical modifications to the electrolyte also make the typically short-lived and volatile lithium metal batteries rechargeable and safer to use. Moreover, the batteries are made using existing lithium ion manufacturing equipment, which makes them scalable.

After first unveiling a working prototype in October 2015, SolidEnergy raised over $12 million from investors and now plans to start production for some projects with drones, which could really use the higher energy density, and they hope their battery will start making its way into consumer electronics next year. 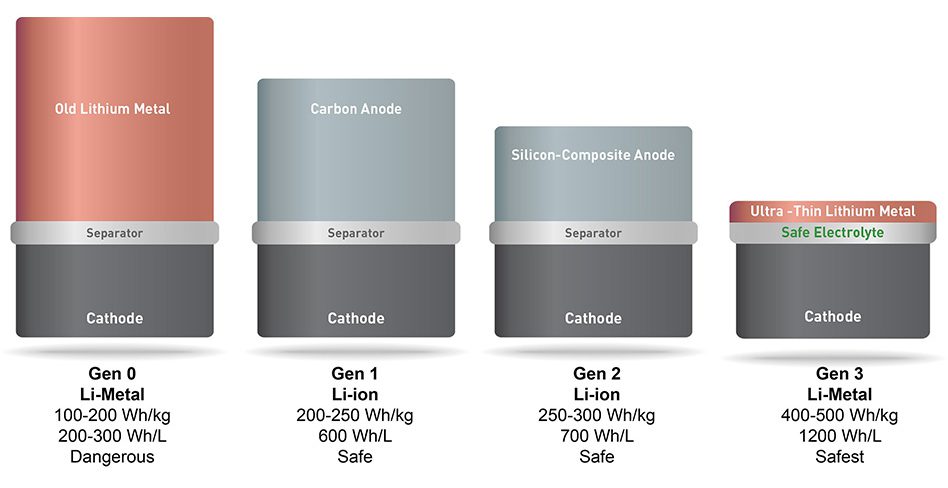 The scientist described his energy density breakthrough as “kind of the holy grail for batteries”.

The main issue with li-metal batteries is that they react poorly with the battery’s electrolyte and become unstable, which reduces the durability of the battery. Hu says that he solved the problem by developing a solid and liquid hybrid electrolyte solution:

The company didn’t release many details about the battery, but it claims that it now has “safety and longevity features of lithium ion batteries”, while having about twice the energy density.

It could be interesting, but we haven’t heard much about cost either. Hu says that the system is scalable, but without proving a cost per kWh figure.