Sierra Club, a not-for-profit environmental organisation, conducted a study in 308 dealerships and stores from 13 different automakers across ten states with zero-emission vehicle mandates in order to evaluate the state of the electric vehicle shopping experience.

The study paints a negative (borderline disastrous) picture of the electric vehicle shopping experience, especially outside of California, for almost all automakers except for Tesla, which gives weight to the automaker’s direct sales distribution model through company-owned stores.

Interestingly, we reported on a similar study from Pied Piper last month. While not focused on the electric vehicle market, it was a mystery shopper study like this one from the Sierra Club, but unlike this one, it placed Tesla dead last because the automaker wasn’t using the “traditional sales tactics” you’d find at dealerships, which is probably why it actually ended up first on the Sierra Club study.

While the study clearly declares that Tesla has the best electric vehicle shopping experience, it also gives honorable mentions to a few dealerships going above and beyond to sell EVs. Unfortunately, there are too few of them among the 308 dealers surveyed.

You can find the study in full below, but here are a few highlights:

“Our volunteers told us that nearly half the time EVs were not displayed prominently, and that the plug-in cars were often hard to find on a dealership lot. Many volunteers told us that salespeople they spoke with neglected to inform them of state and federal incentives that could lower the cost of an EV. Some people even found themselves unable to test-drive an EV because the dealership had failed to charge it.”

The inability to get a test drive is especially aberrant since electric vehicle buyers in large do a lot of research and they often know more than the salesperson at the dealerships – making a test drive the primary reason to go to the dealer, but Sierra Club found that at 14% of the dealerships EVs were not sufficiently charged for a test drive, including at “22% of the Chevy dealerships and at 21% of the Ford dealerships visited”. 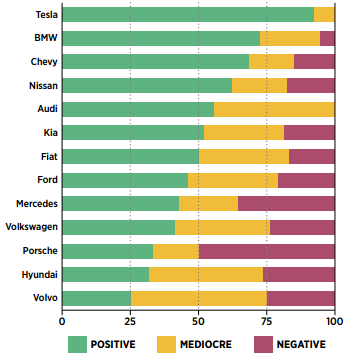 The study also found that aside from Tesla, dealerships often do not prominently display electric vehicles or even bring up the opportunity for the $7,500 federal tax credit.

The paper is full of quotes from the volunteers doing the survey. While anecdotal, most of them are worrying. Here are some examples:

A Ford dealership in California:

Is a 10-stall DC fast-charging station the only option?

A VW dealership in Maine:

“There were no EVs in stock and he stated that he has no interest in ever selling an electric vehicle… He said the only way he would sell an EV is if VW forced him to.”

From a Ford dealership in New York:

“Senior sales staff had no idea what the battery electric vehicles’ range was. He called it a go kart.”

Tesla doesn’t use a franchise dealership models like most automakers in the US and instead owns all of its stores. It is still struggling to instate its distribution model in several states where the auto dealer associations are pushing back and trying to force Tesla to use their model through legislation preventing automakers to own auto dealerships.

One of the main reason why Tesla refuses to go through third-party dealerships is their proven inability to sell electric vehicles either due to the lack of desire or knowledge. Of course, the other important reason is that dealerships make most of their profit on servicing the vehicles they sell, while Tesla aims not to make a profit on service.