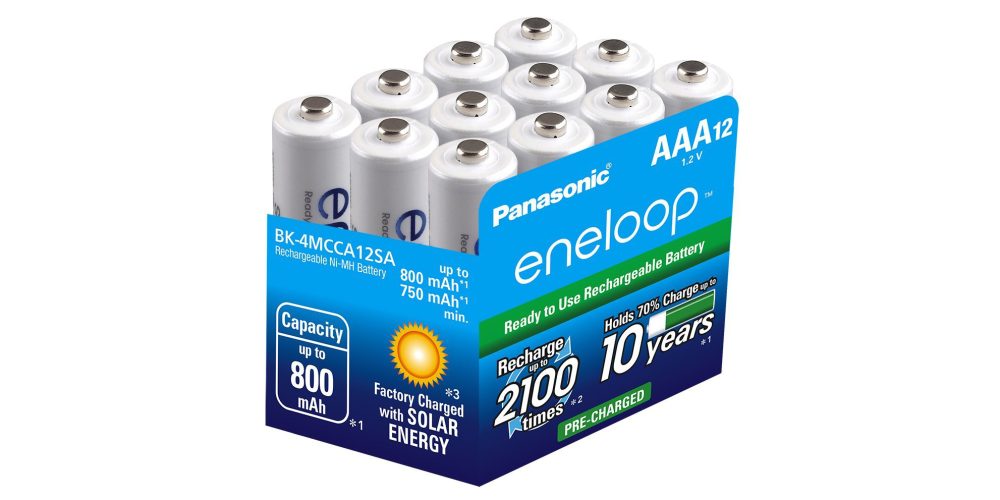 Amazon offers a 12-pack of Panasonic eneloop AAA Rechargeable Batteries for $19.99 Prime shipped. That’s up to $10 off the regular price and the lowest that Amazon has ever sold it for. For further comparison, that’s within range of the price we typically see for an eight-pack from notable brands. Each individual battery is capable of being recharged 2,100 times while maintaining a high percentage of its capacity. Amazon customers love this 12-pack, with over 3,800 reviewers leaving a 4.7/5 star rating.

eneloop Ni-MH ‘Low Self Discharge’ batteries utilize Panasonic’s advanced rechargeable cell technology allowing them to be recharged up to 2100 times. These battery cells are ideal for all household products including flashlights, wireless gaming devices, digital camera flash units, and wireless mouse and keyboards. Improvements to the conductive surface layer of the active (positive) electrode material (made primarily from nickel-metal hydride) produce greater conductivity and durability. Limiting the degradation of the conductive layer increases the number of times that eneloop batteries can be recharged.

Rayman Classic just hit its lowest price ever on the App Store: $1 (Reg. $5)

We have a load of MacBook Messenger Bags at 50% off today on Amazon, deals starting at $20 Prime shipped

Get some free money w/ up to 20% off gift cards: CVS, Cold Stone Creamery, many more

Your morning coffee and doughnuts at Krispy Kreme are now 50% off: $20 credit for $10

The stellar Transistor action-RPG for iOS is now on sale for $3 (Reg. $10)

Awesome Note 2 for iPhone offers an Apple Watch app and is matching its lowest price ever: $2 (Reg. $4)

Review: The JBL Charge 3 is the perfect summer Bluetooth speaker thanks to its rugged design [Video]

Roundup: Always have a Lightning cable nearby with one of these handy keychains

Store it all on this Seagate Backup Plus 8TB USB 3.0 External Hard Drive for $200 shipped, more

The Cyclotron Bike has a crazy futuristic look with smartphone connectivity, more