A Tesla Model S with a LIDAR sensor mounted on the roof has been spotted around the automaker’s headquarters in Palo Alto last week. Tesla is set to soon release its next generation sensor suite for the Autopilot program, but so far, Tesla CEO Elon Musk has made it clear that a lidar sensor is not in the company’s plans.

The vehicle was spotted by an anonymous Tesla owner who posted the picture seen below and discussed the sighting in a blog post:

“The Tesla self-driving test vehicle is disguised as cleverly as possible.  A giant Stanford logo on the rear windshield and a Stanford license plate frame with a paper plate.  Clearly, Tesla is trying to convince locals that this is part of a Stanford research project.   Although Stanford is a very wealthy university, I doubt they would be using a brand new Model S for experimental purposes.  My suspicions were confirmed that this was a Tesla corporate vehicle when I saw it enter the back parking lot of Tesla headquarters!”

Tesla vehicles have been spotted with lidar sensors in the past, they have never been confirmed to be owned by Tesla. Other companies working on autonomous driving technology, like Bosch, have used Model S’s in the past to test their hardware. While not a “confirmation” like the anonymous Tesla owner is claiming, the fact that it pulled into the parking lot of Tesla’s HQ could be an indicator that Tesla is operating the vehicle.

We contacted Tesla to see if they could confirm that the vehicle is part of the company’s fleet and we will update if we get an answer. 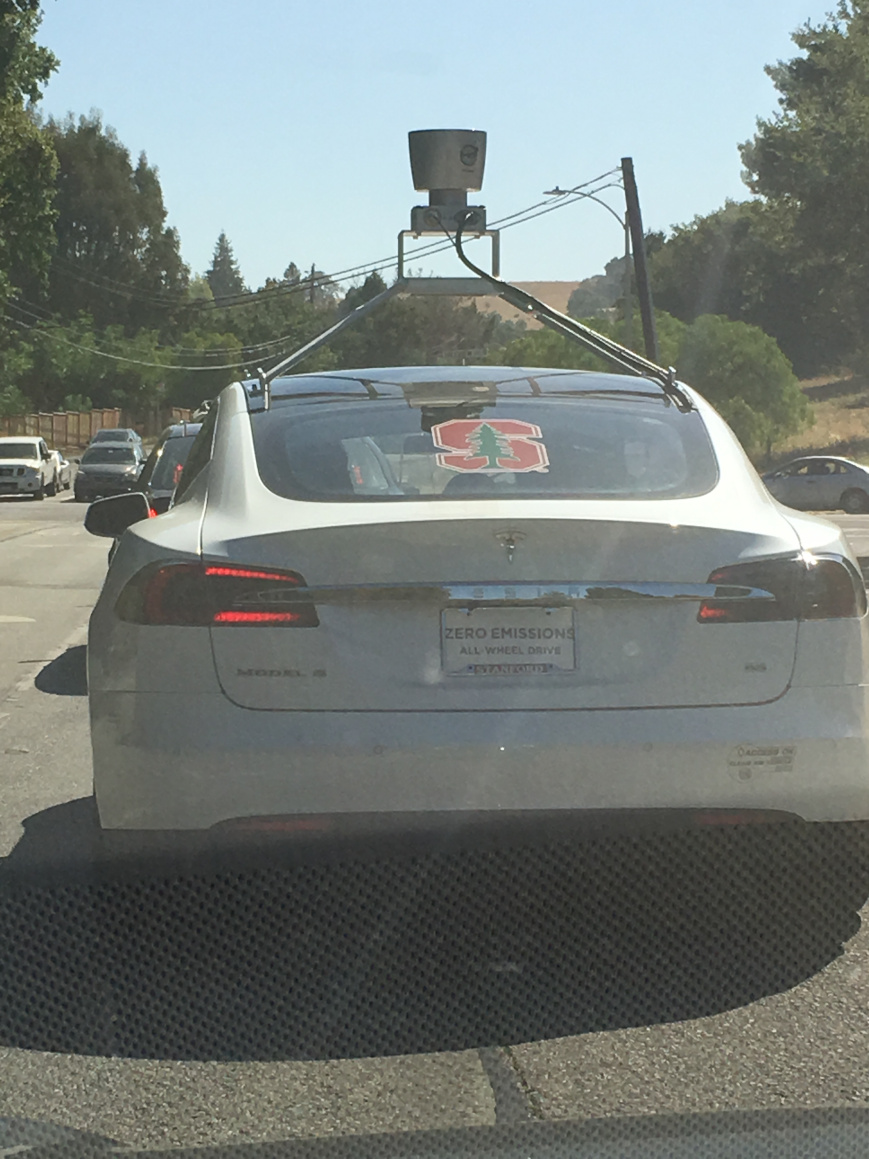 Tesla’s current sensor suite for the Autopilot consists of a forward-looking radar, a camera and 360-degree ultrasonic sensors. The hardware is not capable of supporting fully autonomous driving technology and Tesla is expected to introduce a new suite to support the technology in the near future.

While most other companies in the field are betting on lidar, which uses laser combined with radar systems, Tesla has been investing in a more camera and radar heavy system.

Elon Musk is on record saying that lidar is not necessary for fully autonomous cars:

That said, I don’t think you need LIDAR. I think you can do this all with passive optical and then with maybe one forward RADAR… if you are driving fast into rain or snow or dust. I think that completely solves it without the use of LIDAR. I’m not a big fan of LIDAR, I don’t think it makes sense in this context.

If this is still true to Tesla, it doesn’t necessarily mean that the vehicle spotted is not Tesla’s, but rather that the company could be benchmarking a lidar system against its hardware suite.

We will soon have more news on Tesla’s new suite of  sensors for the next generation Autopilot, which might actually not even be an ‘Autopilot’. Stay tuned