Tesla is talking with gas station chains about installing Superchargers

In a future where the world’s car fleet is rapidly transitioning to electric vehicles, gas stations will be forcefully downgraded to simple convenience stores and consequently, they will lose a significant revenue stream brought in by people stopping for gas but buying something at the convenience store. Now it looks like Tesla is offering a lifeline to the industry as we learn that the electric automaker is talking with gas station chains about installing Superchargers at some of their stations in the US.

It wouldn’t really be a first globally. Last year, we reported that Tesla sold 12 Superchargers to the Manaseer Group to be installed at three of their gas stations in Jordan (pictured above). From here, partnership with a gas station chain in the US to accelerate the installation of charging stations is not difficult to envision.

This morning, the Washington Post published an article about Tesla being in talks with Sheetz, a gas station and convenience store chain with hundreds of locations primarily in the mid-Atlantic region.

“We’ve had discussions with them about putting their chargers in our stores. We haven’t done anything yet, but we’re continuing those discussions.”

Tesla has a long-standing ‘Destination Charging’ program under which businesses can apply to get Tesla Wall Connectors for their customers, but it’s not what we are talking about here. Destination chargers are for when you arrive at your destination and gas stations are hardly “destinations”.

The Washington Post article never mentioned Tesla’s Superchargers, its network of DC fast-charging station to enable long distance travel, but we reach out to a Tesla spokesperson to confirm what the talks entail:

“Tesla is talking to some gas station chains about installing charging at some stations that are conveniently located for long-distance, emission-free travel and could provide the necessary amenities for our customers.”

When we talk about “long-distance travel”, we talk about Superchargers or at least DC fast-charging. Those are not meant to take hours. Currently, the typical charging session takes about 30 minutes to an hour, but Tesla aims to eventually bring it down to 5 minutes.

It doesn’t necessarily mean that Tesla could get a similar deal with a chain of gas stations,. but it is something to think about. 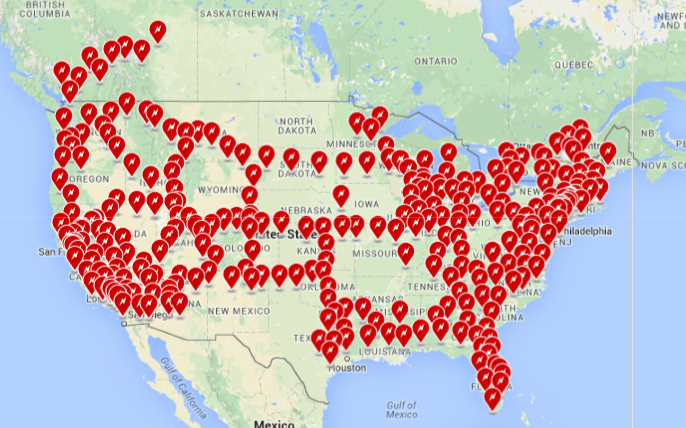 Tesla already operates an extensive network of Superchargers in the US, but the automaker plans to double it within the next two years.