Battery market for electric vehicles to rise to $10 Billion in 2020, thanks to Tesla, BYD and VW [Report]

A new research report from Lux Research looked into the projected growth of the battery sector for electric vehicles (BEVs and PHEVs) and concluded that the market will rise to $10 Billion in 2020 with six large carmakers led by Tesla accounting for 90% of the demand.

The research paper looked at both the demand from automakers and supply from battery manufacturers. Chris Robinson, Lux Research Associate and lead author of the report, sees  Panasonic keeping its lead with 46% market share, thanks to its Gigafactory deal with Tesla and the demand for the Model 3, followed by BYD, LG Chem, NEC, Samsung SDI and others.

“Plug-in adoption is ultimately being fueled by rapidly decreasing battery costs and the success of early EVs such as Tesla’s Model S and Nissan’s Leaf, which has forced a number of other OEMs to make more serious commitments to developing plug-in vehicles,”

Lux released this graph showing its projected market demand from the top EV makers in the next 4 years: 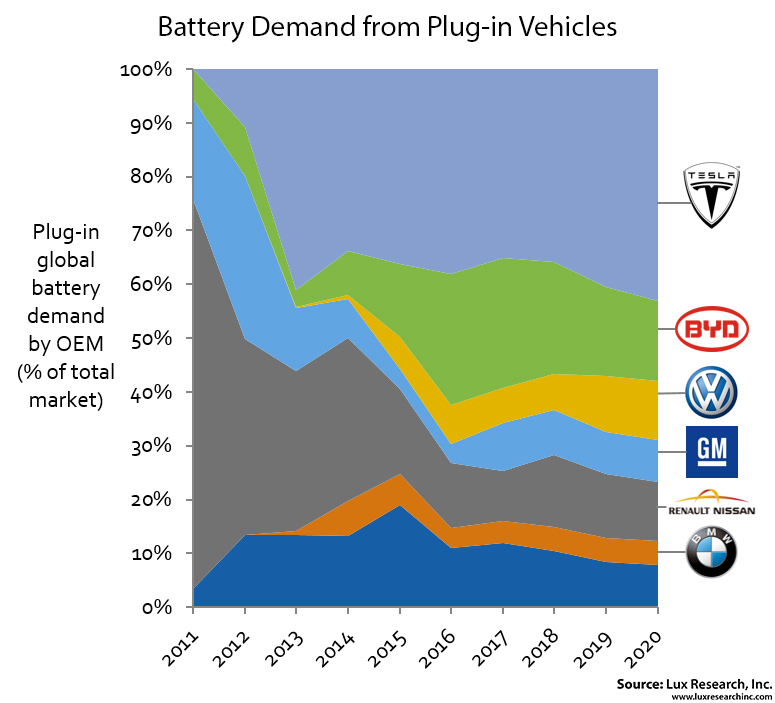 Here are the key points being made in the report:

Indeed, the VW group is expected to drive the electric vehicle market in the next few years. The automaker recently announced plans to build 2 to 3 million all-electric cars a year by 2025 and to introduce up to 30 new electric models.