Elon Musk denies deal for a Tesla joint-venture in China, and maybe he will not need one

Earlier this month, Bloomberg came out with a report claiming that signed a “non-binding memorandum of understanding” with Jinqiao Group, a Shanghai government-owned company, to invest in a $9 billion electric vehicle factory in the region. At the time, Tesla didn’t comment on the report, but now CEO Elon Musk denies that a deal was signed:

@newsycombinator @mashable We haven't signed anything for a factory in China

Earlier this year, Musk confirmed that the automaker plans on securing a location and a local partner for a manufacturing facility in China by the middle of the 2016, but now we learn that there’s a possibility that Tesla will not have to create a partnership as the government is exploring the a lift of the cap on joint-ventures for automakers.

Since 1994, the Chinese government has mandated that all foreign automakers enter joint-ventures with domestic partners to operate in the country since 1994.

Any automaker wanting to established any manufacturing capacity in China, which is now the world’s biggest auto market, need a 50 percent partner in the country.

The protectionist approach led to a complex web of partnership visualized here: 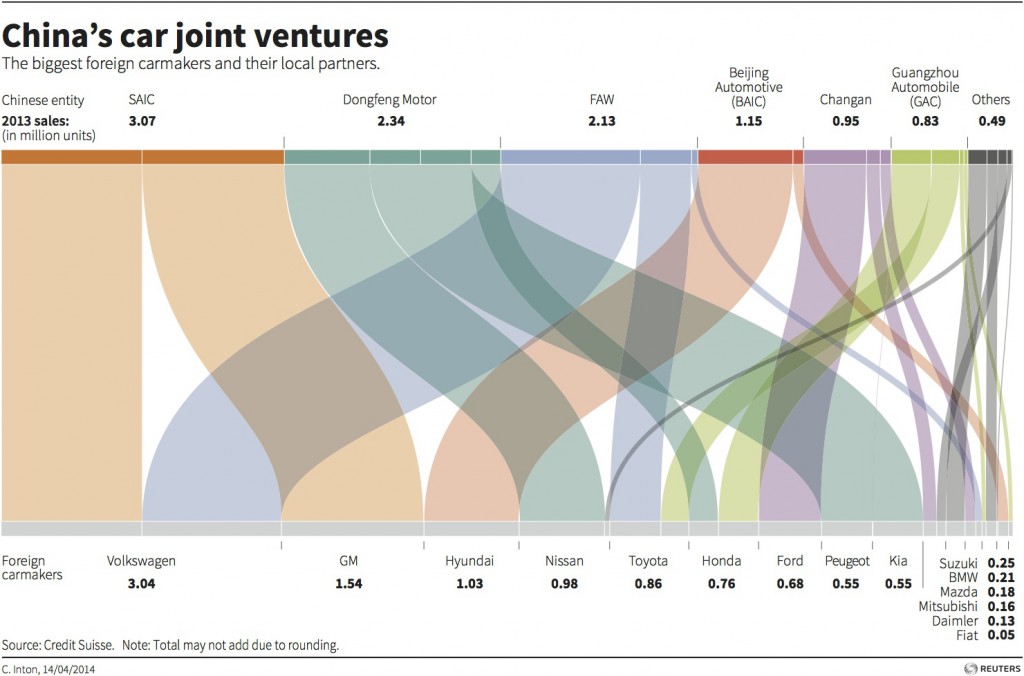 But the politic could soon change as the chairman of the National Development and Reform Commission, Xu Shaoshi, recently confirmed that the government is looking into lifting the cap. Bloomberg reports that the initiative is already being backed by a major domestic car manufacturer, but not without opposition:

“Backers of allowing foreign carmakers to control their operations in the world’s largest auto market include Li Shufu, the billionaire chairman of Volvo Cars parent Zhejiang Geely Holding Group Co., who’s said it would encourage competition and be in the interests of consumers. The China Association of Automobile Manufacturers has been among the detractors, warning in 2014 that Chinese brands would be “killed in the cradle” if foreign automakers are allowed to become more independent from their domestic partners.”

While it sounds like it’s far from a done deal, it certainly something to consider for automakers looking to establish new manufacturing capacity in the country, like Tesla.

In the past, Musk made it clear that any manufacturing in China would be to satisfy local demand for Tesla’s vehicles in the country. China is now the world’s biggest automotive market and following the unveiling the of the Model 3, Tesla reported having received a “flood of pre-orders” from the country which has been its second-biggest market for reservations so far, according to Tesla’s Vice President of Asia-Pacific Ren Yuxiang.