Switzerland is getting a new fast-charging network worthy of the Tesla Supercharger: 150kW chargers at 100 sites

Several alternatives to Tesla’s proprietary charging system are available and promise to soon deliver up to 150 kW, which can charge most vehicles in about 30 to 45 minutes. The latest system is going to come online in Switzerland this summer and will operate over 150 chargers at 100 locations by 2018.

Electric vehicles are popular in Switzerland, especially the Tesla Model S, which not only dominates the EV market in the country but also outsells any other gas-powered luxury sedan in its segment.

In 2015, Tesla delivered 1,556 Model S’s in Switzerland, based on registration data, and during the last quarter alone, the relatively small country added 430 new Teslas – more than larger neighboring markets like France or Germany.

Because of its small area (41,293.2 km2 – 15,943.4 sq mi), it is a lot easier to cover the whole country with charging stations to support long distance driving. For example, Tesla installed 10 Supercharger locations with a total 54 Superchargers across the country. 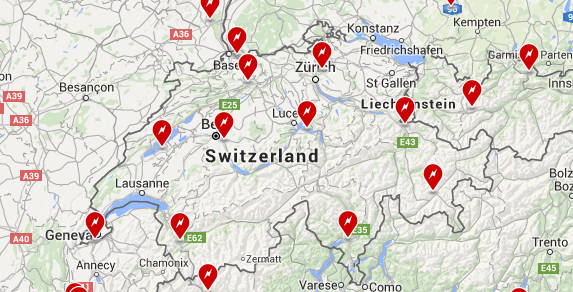 Switzerland’s new network, which will be built with GOtthard FASTcharge according to Breezcar (French), will be spread out to more locations (~100), but with fewer chargers per locations (~150 total).

Each charger will be equipped with 3 charging options: CCS and CHAdeMO for DC fast-charging and a level 2 AC charger. The company claims that its system will support up to 150 kW output for the DC options – Tesla’s Superchargers currently support up to 135 kW.

The company will partner with service stations, restaurants and hotels along highways, and the network will be compatible with SwissCharge.