Elon Musk took to Twitter this afternoon to answer questions pertaining to the Model 3. The result is one of the most information-dense Elon “tweetstorms” in recent memory.

A few tweets suggest that in order to maximize the number of customers getting the full $7500 US federal tax credit, Tesla intends to ramp production on the Model 3 extremely quickly. Elon promised that both East Coast buyers and non-Tesla owners would have a chance at getting the tax credit. He specifically mentions the production ramp plan as a reason for this, which means Tesla intends to hit the ground running with fulfilling Model 3 pre-orders. Due to the way the credit phases out, the more orders they can fulfill early, the more people get the tax credit. There is not a hard cutoff at 200,000 vehicles.

Also mentioned by Musk were some clarifications on the geographical roll-out. Model 3 orders will be sorted and ranked geographically, meaning you will have a reservation sequence number for your particular area, not necessarily on the entire order list. Despite the high number of orders, Musk mentions that ordering now will make a large difference for your particular location.

A Model 3 order gives you priority in your geography, so, even tho total count is high, ordering early will make a big difference locally.

The “West Coast first” roll-out of the Model 3 is explained. Deliveries will begin nearest to Tesla’s Fremont factory first in order to quickly solve issues that might pop-up on early versions of the car. It certainly would be easier for Tesla to fix a mechanical issue if all the vehicles that need fixed are within a few hundred miles. However, this does not mean all West Coast orders will be given priority, just the earliest ones, which may be limited mostly to employees and Tesla owners.

@MICHAELSD01 @TechGrlTweeter Won't happen. Reason initial cars are delivered close to factory is to have rapid turnaround on early issues. 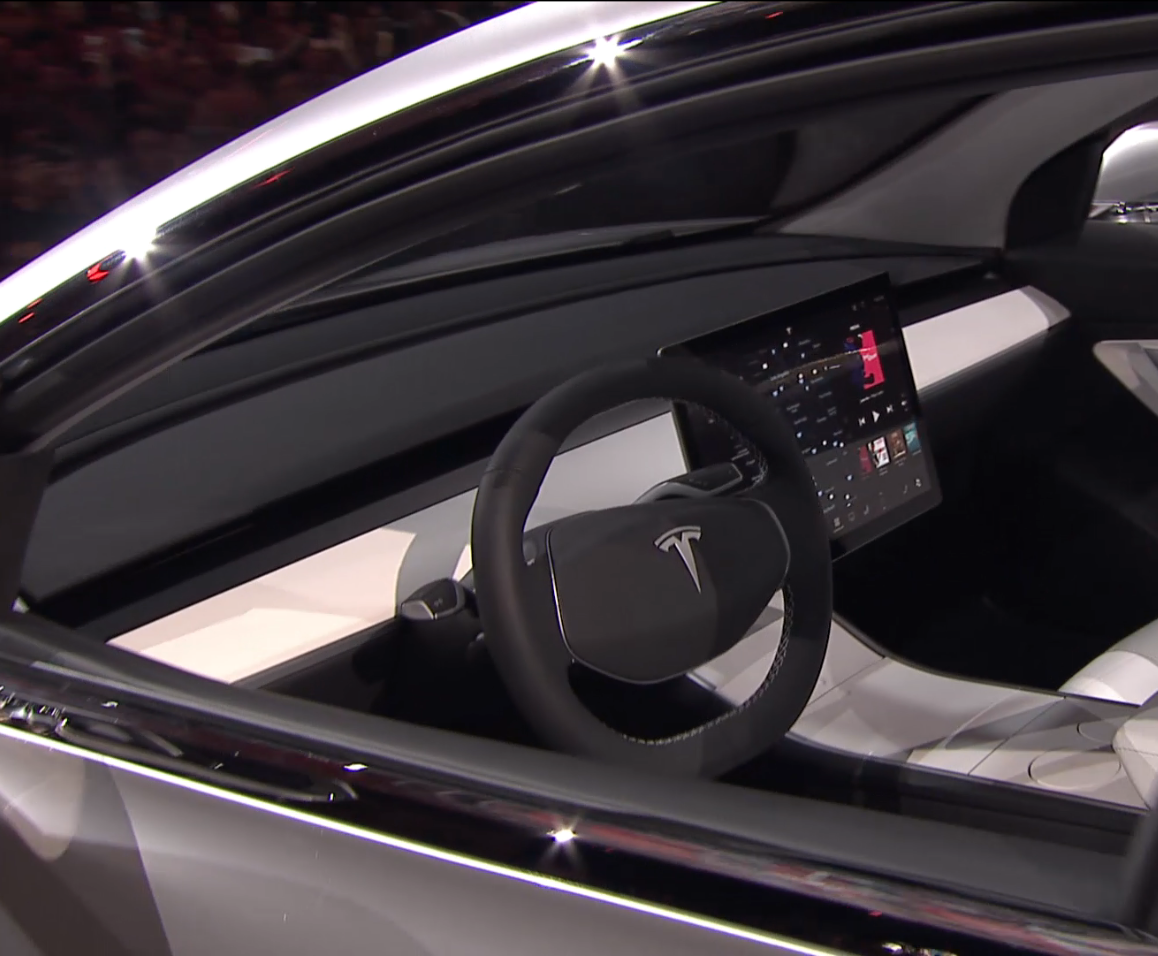 There has been a lot of discussion on the subject of the Model 3’s minimalist interior, with the most controversial point being the absence of a traditional instrument cluster. All of the vehicle information, including speed, is currently displayed on a center monitor instead. Musk mentions that the lack of an instrument cluster will make more sense later, suggesting the possibility of a heads up display. This would make a lot of sense considering most vehicles with HUD have duplicate information immediately below on the dashboard. Tesla would be able to keep their minimalist dashboard and still display important information immediately in front of the driver by eliminating the instrument cluster and adding an HUD.

Another point of contention has been the chunky, unfinished-looking steering wheel. Musk makes a point to hype up the “real steering controls,” explaining that it “feels like a spaceship.” Early Model 3 design sketches show a U-shaped steering wheel, much like the flight-yoke in some aircraft. It’s possible that a variation of that will make it to the final version of the car.

@HBL_Cosmin Wait until you see the real steering controls and system for the 3. It feels like a spaceship.

Some have also complained about the decision to go with a more traditional trunk, as opposed to the hatchback style found in the Model S. Musk explains that despite the smaller opening, a bike should still fit within the back of the Model 3. This will be aided by the ability of the back seats to fold down flat, which is also confirmed by Musk.

@CmaxVs Only way to get enough rear passenger headroom was to move the rear roof cross-car support beam. A bike will still fit no problem.

@_amwolo_ They can. Will be great for road trips and camping

Parents rejoice. The Model 3 will fit up to 3 car seats in the back.

Musk confirms that some of the exterior design elements are not final, including the grill-less face of the Model 3. He does use words like “tweaking” and “refinement,” however, which still suggests the general look of the vehicle is near-final.

@scottkelley99 Edge and contour refinement are ongoing. Even .1mm matters.

Quite a bit of information on the Model 3’s all-wheel drive feature. RWD will be standard, but AWD is expected to be less than $5000. The Model 3’s at the reveal were indeed AWD, but Musk says the production AWD will be “much faster.” Musk also touted the ability of Tesla’s RWD vehicles to exceed traditional AWD vehicles in traction control. This is due to the lightning quick torque vectoring that comes with electric drive.

@AndersRytter yes, but production AWD will be a lot faster

Model 3 will be RWD, with dual motor AWD optional. Even RWD will have great traction on ice due to fast torque response of Tesla drivetrain.

@torvos torque is shifted between front & rear motors every ~.01 secs. Traction control is way better than a normal AWD. Digital vs analog.

Musk hints that the matte black paint job shown on Thursday might make it to production, as will the wheels we saw, a tow hitch and a vegan interior.

@Model3Owners They will. We spent a lot of time on those.

@SnoozeThroughF1 There will be an optional tow hitch.

Musk answered several questions concerning non-US customers. Europe will eventually get a full-fledged Tesla factory, but not until after Model 3 deliveries begin there. Tesla will come to India before the Model 3 is released. Spain’s lack of service centers “will be addressed this year.” Service centers and Superchargers will cover Italy by the end of this year. The same can be said for Ireland.

@tapwin No, but we will need to build a factory in Europe to serve long-term regional demand as Fremont reaches max capacity.

@grebakshay We are working on an exact date, but Tesla will be in India before 3 production starts.

@Alandbru @TeslaMotors should be addressed this year

@elonmusk @TeslaMotors how many orders from Italy? Are you going to expand the supercharger network in northern Italy?