Wired claims that this cloaked car is the Tesla Model 3

Wired Germany recently got access to Tesla’s design studio in Hawthorne, California, where the automaker will unveil the Model 3 tomorrow. Today the publication published an interview (German) with Tesla’s Chief Designer Franz von Holzhausen and claims that the picture above is a cloaked Model 3.

Without much of a useful reference point in the picture, it’s difficult to determine the size of the vehicle, but it does appear smaller than the Model S.

The Model 3 is expected to be about 20% smaller than the Tesla’s flagship sedan.

Otherwise, the shape itself appears to be awfully similar, if not identical, to the shape of a Model S. Though it does look like the front-end could be more like the Model X’s than the S because of the crease in the cloak above the “grill”. The Model S front-end shouldn’t allow that to happen. It also looks like the car could be standing higher than the S.

Update: A redditor upped the levels of the picture for more details and it shows high wheel wells: 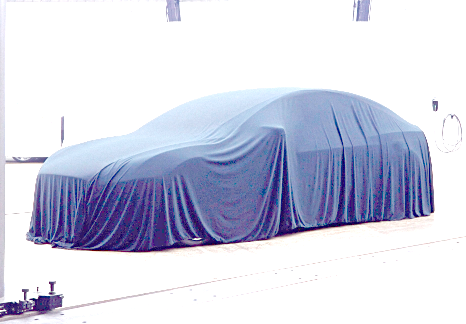 We should have more about the Model 3 design and a few specs for you soon. Stay tuned.

Tesla’s Chief Designer commented about electric vehicle design in the interview and said that EV makers need to design cars that can be accessible to the masses, and not “weird-mobiles” only a few early adopters would like.

The Tesla Model 3 will be unveiled at Tesla’s Design Studio in Hawthorne, California, on March 31st at 8:30pm Pacific. If you want to reserve the vehicle, Tesla revealed all the reservation process details per region and here’s everything we know about the vehicle.