Fred Lambert | Feb 22 2016 - 7:36 am PT
5 Comments
A member of the media test drives a Tesla Motors Inc. Model S car equipped with Autopilot in Palo Alto, California, U.S., on Wednesday, Oct. 14, 2015. Tesla Motors Inc. will begin rolling out the first version of its highly anticipated "autopilot" features to owners of its all-electric Model S sedan Thursday. Autopilot is a step toward the vision of autonomous or self-driving cars, and includes features like automatic lane changing and the ability of the Model S to parallel park for you. Photographer: David Paul Morris/Bloomberg via Getty Images

Developments in autonomous driving technology are creating tons of opportunities for engineers with expertise in computer vision, machine learning, robotics and other related fields. Almost all car manufacturer and several huge tech companies are scrambling to advance the technology. Some companies are further along than others and besides traditional automakers, Google, Apple, Bosch, Uber and others have been building important teams of engineers and researchers for their own efforts in developing the technology.

Tesla is another leader in the field and it has made it a priority to acquire talent for its own effort in the sector called the ‘Autopilot’ team. Tesla CEO Elon Musk even took to Twitter to encourage engineers to join the team. It’s undoubtedly a good use of his large Twitter following (3.4 million followers), but certainly an unconventional way to ask for resumes.

The automaker managed to assemble an impressive team to develop the next generation Autopilot, which aims to eventually allow fully autonomous driving, but not without a few bumps along the way. Today we take a look at the team and its refresh “exodus” of talent that took place around the release of the v7.0 of the feature.

Unlike Google, which doesn’t have a fleet of customer owned vehicles on the road and focuses solely on fully autonomous vehicles, Tesla took an incremental approach to the technology. It aims to introduce increasingly more advanced autonomous driving features, also called assisted driving features, in order to ultimately allow fully self-driving cars.

The strategy offers its set of pros and cons, but in term of attracting talent, the opportunity to see your work being used by consumers with a short feedback loop is certainly a pro for most engineers and inventors.

Tesla has been working on its Autopilot program for years now, but the feature became official when the automaker started installing the necessary hardware, which consists of a forward-looking camera, a radar, and 360 degree sonar sensors in every vehicle it manufactures since September 2014 and after it officially announced it during the “D event”.

The automaker released the first major feature utilizing the hardware, the active cruise control, in early 2015, but the official “Autopilot” update, which introduced the ‘Autosteer’ feature, happened through an over-the-air update in October 2015 (Version 7.0).

In May 2014, Tesla hired a founding member of BMW’s ADAS/Autonomous driving efforts, Darren Liccardo, to lead the team prior to the official announcement.

Liccardo was part of the “exodus”, he left Tesla in July 2015 to become ‘Vice-President of Engineering, Systems and Applications’ at drone maker DJI.

Of course, calling it an “exodus” is an exaggeration, but even though the few former team members we talked to didn’t want to go in details about what pushed them to leave, they acknowledged that the turnover rate was much higher than normal around the release of version 7.0 and the ‘Autosteer’ feature.

Around the same time Liccardo left, in July 2015, Autopilot Firmware Manager Jamie Carlson left Tesla to join Apple on a “Special Project” rumored to be the Cupertino-based company’s own electric self-driving electric car project. At Apple, Carlson joined former Tesla Staff Program Manager Hal Ockerse who was working on the hardware architecture of the second generation sensor suite before joining Apple a month before Carlson.

A month before the release of the version 7.0, an early member of the Autopilot team, Andrew Gray, left to become VP of Engineering of Cruise Automation, a startup trying to bring to market a similar system as Tesla’s Autopilot, but as an aftermarket product.

Gray holds a Doctorate in ‘Control Theory, Dynamics and Artificial Intelligence’ from UC Berkeley and was Director of Hyundai Center of Excellence in Berkeley, before joining Tesla in 2013.

At Tesla, he was doing research and development on “Machine Learning, Computer Vision, Localization/Estimation, Planning and Decision Making, Dynamics and Control”, according to his LinkedIn profile.

Days after the release of the v7.0 of the Autopilot in October 2015, Robert Rose, the software engineer Musk brought in from AI firm Vicarious to lead the Autopilot team into the release, left the automaker.

We later learned that he left for Google, but not to work on its self-driving car effort.

From our profile at the time Rose made his move from Tesla to Google:

Robert Rose has an impressive resumé as a software engineer. He worked at HP while completing his MS in Electrical and Computer Engineering at Oregon State University. He then developed award-winning PSP games at Sony such as Syphon Filter: Dark Mirror and Resistance: Retribution.

In 2009, he moved to California to be the lead software engineer for SpaceX’s first Falcon 9 and Dragon flight. He quickly became Director of Flight Software, a position he held until July 2014. After a brief stint at machine learning firm Vicarious, he joined Tesla last May (2015) to lead the Autopilot team into the release of v7.0 update, which enabled ‘Autosteer’ and ‘Auto Lane Change’.

Another member of the Autopilot team who left during the “exodus” was luminary autonomous driving expert Han-Shue Tan. Tan spent 20 years as a research engineer at UC Berkeley developing self-driving technologies, including automated steering for an articulated bus, before joining Tesla, but leaving 6 months later just before the release of version 7.0.

Tesla’s Autopilot team undoubtedly lost many talented engineers during the past few months, which I have been referring to as the “exodus”, and it will be interesting to follow their new projects, but the automaker still has an impressive and growing team of “hardcore engineers” as Elon Musk would say, developing the Autopilot.

If we look at the scholar level alone, Tesla has a small army of PhDs working on the next generation system. Several of them are machine learning experts working on the Autopilot’s self-learning capabilities.

During the press conference for the release of the Autopilot, Tesla CEO Elon Musk referred to each Model S owner as an “expert trainer” – meaning that each driver will train the autonomous features of the system to feed the collective network intelligence of the fleet by simply driving the electric vehicle on Autopilot. Model S owners have already been reporting noticeable self-improvements of the system.

Sr Machine Learning Engineer Alexander Mott is one of those machine learning expert. Mott holds a PhD in Physic from the California Institute of Technology. He was a researcher at CERN and according to his LinkedIn profile, his PhD thesis was about the search for the Higgs boson:

Search for Higgs boson production beyond the Standard Model using the Razor kinematic variables in pp collisions at 8 TeV and optimization of Higgs boson identification using a quantum annealer.

Berta Rodriguez-Hervas is another machine learning expert now working for Tesla. She holds a doctorate in Electrical and Computer Engineering from the University of Texas at El Paso. Rodriguez-Hervas did her PhD research working on autonomous driving at Mercedes’ Silicon Valley R&D center before joining Tesla as a Sr. Machine Learning Engineer after obtaining her degree. 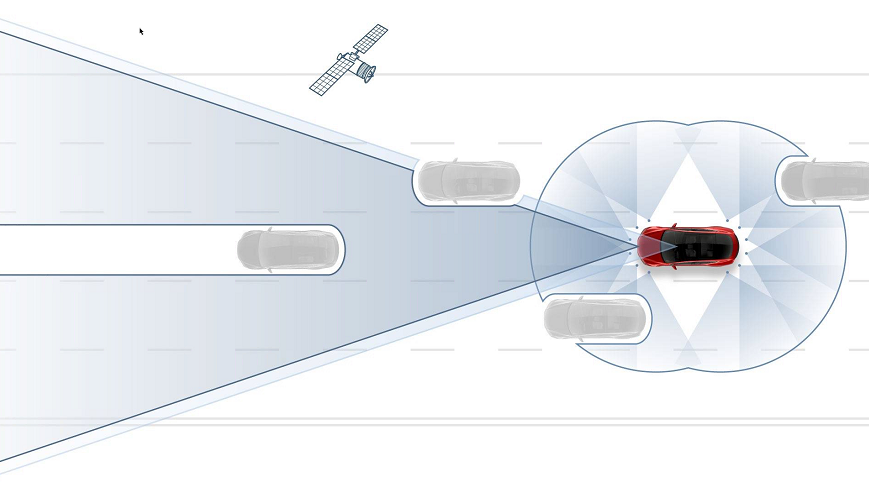 Park works along side Hae-Jong Seo on the Autopilot’s computer vision team. Before joining Tesla, Seo was a senior engineer working on human-machine interactions for Qualcomm

Tesla has also been hiring researchers from universities with known autonomous driving programs like Carnegie Mellon, which has a partnership with Uber.

Here’s quick list of a few other PhDs working on the Autopilot to give you a scope of the team:

Tesla is also employing several more elusive “hacker type” engineers for the Autopilot program. It was revealed last year that Elon Musk offered a multimillion-dollar bonus to George “Geohot” Hotz to try to convince him to come work on the Autopilot at Tesla. Hotz refused, and instead he is pursuing his own effort in the self-driving car field. He already demonstrated the first version of his system installed in a 2016 Acura ILX.

Another interesting member of the Autopilot software team is Kurt Thywissen, Senior Engineering Manager, UI & Autopilot Software. Thywissen was one of the software engineers working on the popular P2P client Kazaa who left to create Skype. He joined Tesla’s team in 2013 after leaving a director role at Skype.

Former SpaceX Director of Flight Software Robert Rose wasn’t the only SpaceX veteran to join Tesla’s Autopilot effort, Cliff Spradlin was with Robert on SpaceX’s flight software team and joined Tesla as a Auotpilot Staff Software Engineer in July 2015, but unlike Rose, he didn’t leave during the “exodus”.

On the hardware side of the system, last month we exclusively revealed that Tesla hired legendary microprocessor engineer Jim Keller to lead the Autopilot Hardware Engineering team.

Keller was a lead architect for several of AMD’s most popular chip, as well as Apple’s early line of Ax processors. He will be leading the development and integration of the next generation sensor suite that will Tesla’s vehicle to go fully autonomous.

The next generation suite should feature more cameras around the vehicle based on comments by Elon Musk. So far in the development of the Autopilot, Tesla has been developing its hardware in close partnership with Israel-based tech firm Mobileye, but Tesla seems to be bringing more and more hardware talent in-house.

He briefly described his role as Model X program manager in his LinkedIn profile:

“Responsible to Elon Musk for the cost, quality, schedule and launch of the Model X: the safest, quickest, most advanced sport utility vehicle ever built.”

Anderson’s new role is more fitting to his own background considering he worked for years at the MIT Robotic Mobility Group developing automated driving systems. He holds a PhD in Mechanical Engineering from the MIT and he is listed has an inventor on several patents related to autonomous driving.

Despite the “exodus”, Anderson and Keller will have an incredible team of engineers to lead in making the next generation Autopilot and ultimately, a fully autonomous vehicle, which Tesla CEO Elon Musk says should be ready in about 2 years.