Tesla Motors recently acquired premium domain name ‘Tesla.com’ and it now forwards traffic to ‘Teslamotors.com’. The seller, Stuart Grossman from California, signed a non-disclosure agreement and therefore couldn’t disclose the amount he received to let go of the domain, but estimates range from high 6 figures to low 7 figures.

In 2005, Grossman successfully defended the domain name against a dispute from power conversion system maker Tesla Industries. He couldn’t devote any time to the website, which was only collecting dust, so he decided to sell after the requests to buy, borrow or use the name became a burden.

Grossman talked to NamePros about what led him to sell after so many years:

“Basically, I realized that I would never have the time to use the domain in a productive manner. Between family, work and other obligations, there just isn’t enough of me left over to devote any time to a website.

In addition, between the UDRP, and the frequent (but not very serious) requests to buy, borrow or use the name it was becoming a burden. Despite being insulated by my registrars privacy scheme, people still tracked me down, and called my home, sent letters, and in one case even dropped by for a visit.

In another instance, a bunch of spam went out with tesla.com as the (faked) originating address. I think it contained a virus or a link to something bad. That resulted in a bunch of hate mail and a couple of very nasty phone calls to my residence.​”

Last month, Jason Calacanis, Tesla CEO Elon Musk’s friend and angel investor, used Tesla and ‘tesla.com’ as an example when talking about handling the sale and acquisition of a domain name in demand:

“I do this often, and the conversation is usually “fake it until you make it.” So, there is no problem being TeslaMotors.com forever. Obviously the car and people who make the car are the most important aspect of the success of that company.

However, if the person with Tesla.com decides they want to buy a nice condo or house, sure, it’s a great idea to spend $500k or $1m buying that name. If the person with Tesla.com waits too long, they miss the opportunity to take 10% of the purchase price in stock (or some kicker like that). They also risk pissing off the management team at a startup, who will eventually realize, “well, our cars are the best in the world and this domain name is not essential.”

Teslamotors.com is already a fairly popular website with an average of about 6.4 million hits per month according to Similarweb: 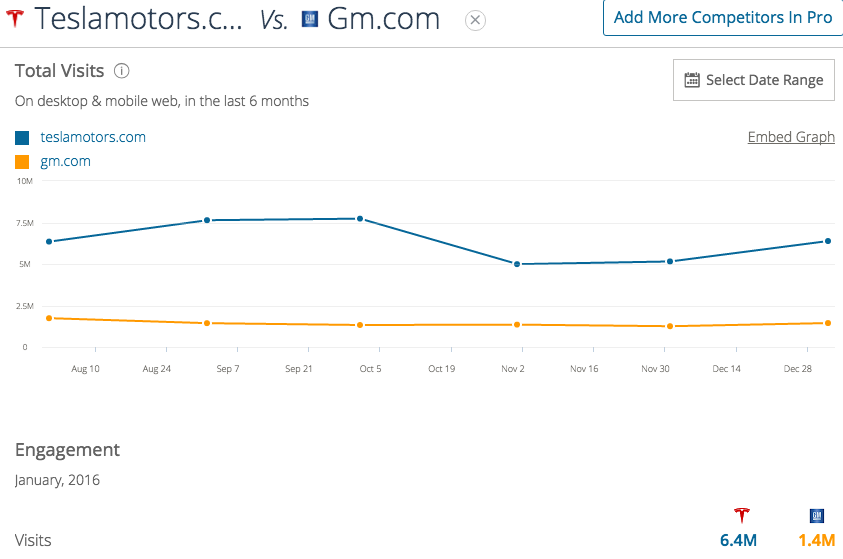 I think we will see these figures significantly increase during and after the unveiling of the Model 3 next month.