In a letter sent to the California Attorney General and US Attorneys, Consumer Watchdog, a consumer and taxpayer protection organization, is asking for an investigation in the oil industry’s mail scheme campaign against the fuel reduction provision in California’s Clean Energy and Pollution Reduction Act.

Last week we reported on California state Democrats dropping the fuel reduction part of the bill, which would have call for a 50% reduction in fuel consumption in the state by 2030 through increase fuel efficiency and more electric vehicles, for which Senate Democratic Leader Kevin De Leon directly blamed the lobbying effort. But Consumer Watchdog is going further by saying that the oil industry’s campaign used “mail fraud”.

“These mailers contained fraudulent information. The industry did this to protect its profits as it continues to make billions of dollars overcharging Californians for gas at the pump.”

The mailers sent by the oil industry to Los Angeles residents claimed that the fuel reduction provision in California’s Clean Energy and Pollution Reduction Act would “take gasoline and choices away from the people by making it harder for families in LA to drive to work and increasing the price of groceries”.

Little to no evidence that the new legislation would have any of these consequences have been put forward.

Here’s a snapshot of the mailer: 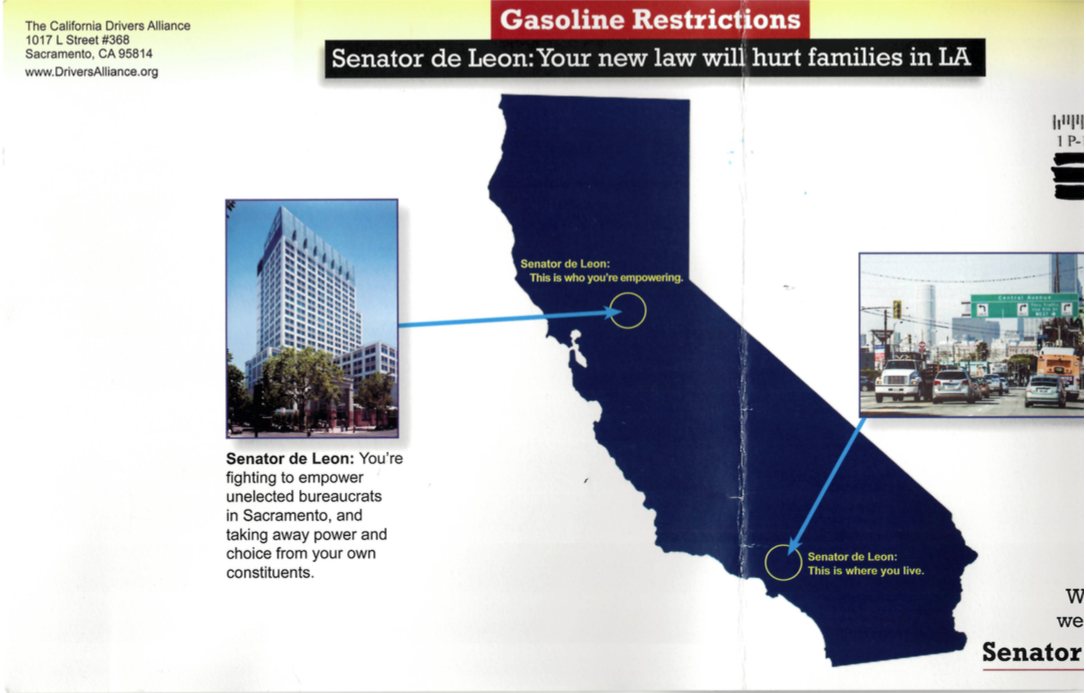 Consumer Watchdog thinks that the oil industry was trying to hide its involvement in the mail campaign by listing a false website: driversalliance.org.

The website is not active and up for sale. On the group’s real website, californiadriversalliance.org, we learn that the organization is backed by the Western States Petroleum Association, an oil industry interest group.

Liza Tucker from Consumer Watchdog said in the letter to the Attorney General:

How could a well-polished multi-million dollar campaign forget its own web address? Oil companies didn’t forget it; they simply wanted to mislead the public. The oil industry deliberately misled the public in a major fraud. […]

According to the consumer protection group, the scheme satisfies the elements to constitute mail fraud.

The State Assembly has since passed the bill under an updated version excluding the fuel reduction provision. The updated version is somewhat disappointing for environmentalists. The main component of the bill is now a new target for 50% of the electricity to come from renewable energy by 2030, something that was already in motion with the main utilities in the state being on target for 33% by 2020.