Tesla Roadster 3.0 Battery Upgrade will cost $29k and increase the range by 35%

Tesla Motors released more information about the Roadster battery upgrade in an email sent to owners today. The new battery pack will have 40% more energy than the previous version, but it will be heavier therefore allowing a 35% increase in range. The pack will be hand-built at low volume and Tesla doesn’t aim at making a profit on the upgrade, which will cost $29,000 including labor.

Tesla originally announced the upgrade late last year. The original announcement mentioned a potential range of 400 miles with not only a new battery pack, but also better aerodynamics and tires. The new information released today makes no mention of the last two.

Here’s the email sent to owners in full: 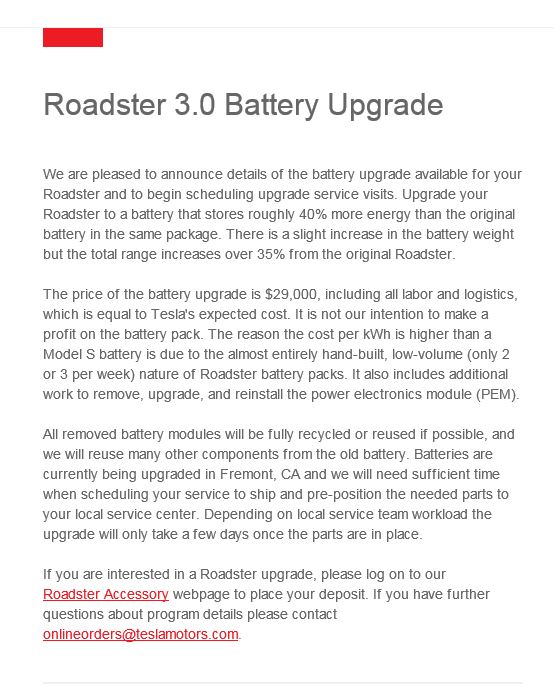 Owners need to place a $5,000 deposit for the company to start building the battery pack and plan the upgrade. On the Tesla Motors Club forum, a few owners have already confirmed having placed their deposit.

Tesla sold roughly 2,400 Roadsters during its original run between 2008 and 2012. It will be interesting to see how many owners will choose to upgrade the battery pack, but apparently the company is not expecting a lot of takers with a planned production of only “2 or 3 per week”. At this rate, it would take 3 years just to replace 20% of the battery packs.