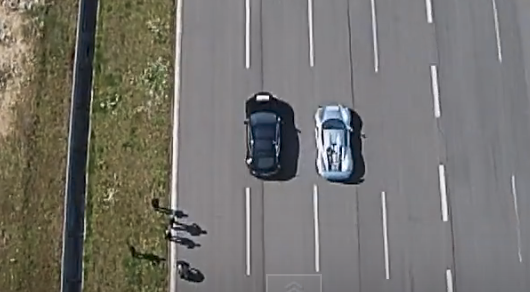 Miliseconds later, it was toast, but the Tesla P85D did at least get off the line quicker than the insanely fast Porsche 918 Spyder which boasts a 2.3 second 0-60 time and sub-10 second quarter mile. Sure, that’s fast but can it seat 7 and have room for groceries too? No, it cannot.

Electric has that instant torque at 0RPMs which doesn’t seem to have a peer in the internal combustion world. The Spyder with its smaller body has a 600hp ICE and a 300HP electric engine driving its wheels.

The screenshot is above and the video follows of AUTO BILD TV’s race on Porsche’s home field. Feels like we’re seeing the last stand of internal combustion in supercars.