This feature powered by Lit Motors’ own patented gyroscopic stability system is aimed at making the C-1 legally drivable with a regular driving license.

This system has the ability to keep the two-wheeled vehicle in an upright position at a complete stop, automatically lean into turns and use gyroscopic torque to counterweight in the instance of a collision.

When parked, the vehicle uses a stand, but once it is in drive, the two control momentum gyroscopes (CMG) activate to keep the vehicle stable.

The Lit Motors team is trying to achieve a 200 miles range on a 10 kWh battery pack for the C-1. This would be an incredible feat, but it remains to be proven. For comparison, the Zero SR electric motorcycle achieves 115 miles with an 11 kWh battery pack and it weighs about half of the 800 lbs the C-1’s expected weight.

The C-1 has the advantage of having a fully enclosed body which should result in much better aerodynamic performances than a regular motorcycle and ultimately a better range per kWh, but I am still sceptical about a 200 miles range with only a 10 kWh battery pack.

Lit Motors expects the C-1 to be priced at $24,000 USD before EV incentives. They originally announced a start of production for Q4 2014, but it didn’t happen and the company has yet to announce a new date for the expected start of production.

The vehicle manufacturing industry is a famously capital intensive business and therefore extremely hostile to start-ups. The young Lit Motors, founded in 2010, raised a $1.2 million seed round in 2013 and then another million in March 2014. It is safe to assume that the company will need to raise significantly more money in order to get to production. Tesla Motors, the last successful American car start-up, raised more than $100 million before delivering its first vehicle to a customer. Tesla had the chance to count on the now billionaire, then millionaire, Elon Musk, to provide most of the early funding. 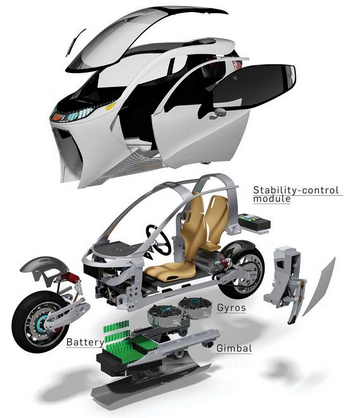 Lit Motors, led by CEO and founder Daniel Kim, also has the chance to have prominent investors and entrepreneurs in their corner. Joe Gebbia, co-founder at Airbnb, and Mark Pincus, founder and CEO at Zynga, both participated in Lit’s last rounds of funding. Pincus is an extremely successful investor. He was an early investor in both Facebook and Twitter. Could Lit Motors be his next success?

We will be following Lit Motors and any development on the C-1. Here’s their most recent design rendering and their last prototype: