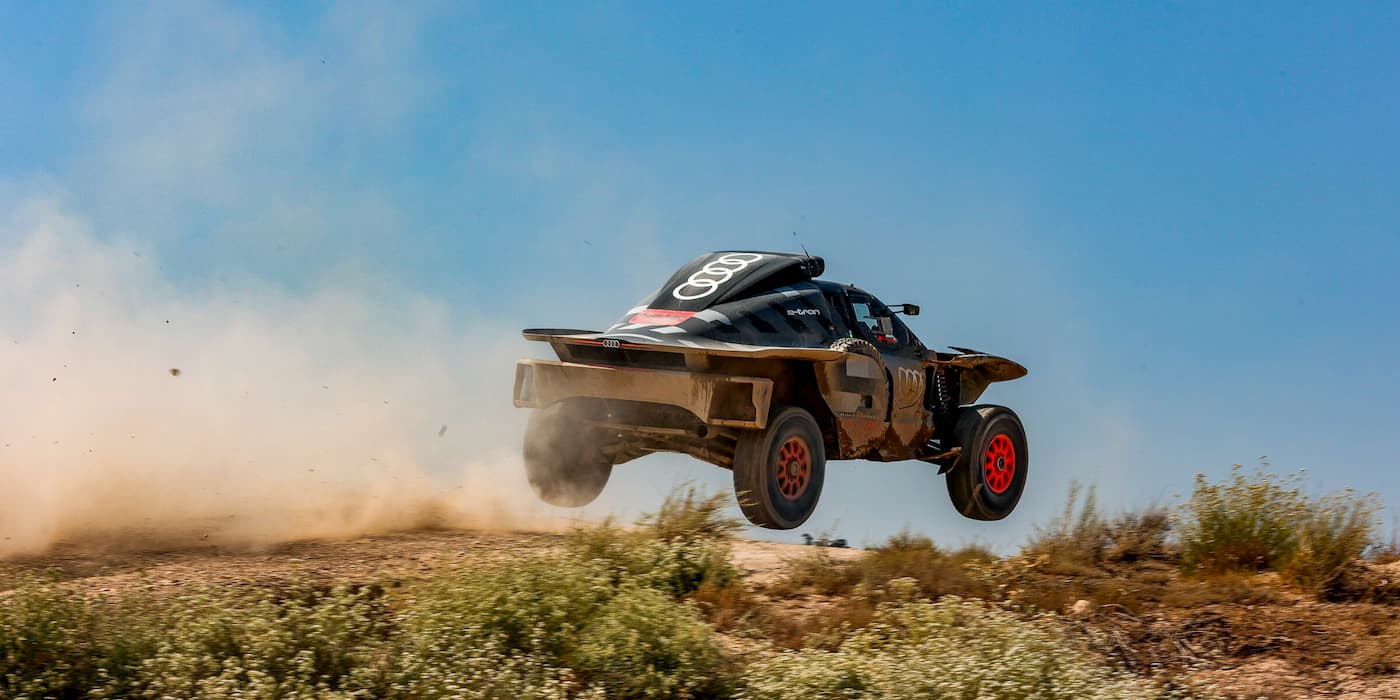 Audi’s electric rally car, the RS Q e-tron, is back and better than ever. After defeating its counterparts in only its second Dakar Rally appearance, Audi’s EV rally car is reemerging, this time with an enhanced face-lift and new performance upgrades. Meet the all-new Audi RS Q e-tron E2.

The electric RS Q e-tron’s first appearance at the Dakar Rally, an annual desert race, did not go as the team planned. Driven by fourteen-time champ Stephane Peterhansel, the electric rally car suffered damage to its suspension, eliminating it from placing in the top overall.

However, it wasn’t the electric drive system that failed them. For one, the RS Q e-tron faced gas-powered opponents who had an unfair advantage (and not because they are more powerful, because, as you will see, they are not).

Just hours before the race started, the Audi team learned they would not be able to use an onboard tire inflation system to improve handling and suspension, a critical tool to maneuver rocky deserts.

Although the team got off to a rocky start, Peterhansel ended up winning the tenth stage in the Audi RS Q e-tron, saying:

I’ve driven many concepts in the desert but the Audi RS Q e-tron is simply sensational in the dunes. The electric drive with its good torque perfectly suits my driving style.

The combination of the electric powertrain and high voltage battery carried the EV rally model reliably through the Abu Dhabi desert. The team is unveiling the next generation in EV rally racing with the Audi RS Q-tron E2.

Audi has optimized its electric rally model, upgrading it based on what it learned from its first two performances. The RS e-tron’s chief designer, Axel Loffler, said:

The Audi RS Q e-tron E2 does not adopt a single body part from its predecessor.

The inside is a bit more spacious as the team is “doing away with the rear hood to the left and right of the b-pillars,” in addition to lowering the center of gravity to reduce weight and drag.

The body is shaped similar to a boat, with the widest point at the driver’s cockpit and both ends tapering toward the front and back.

But even more importantly, the Audi RS Q e-tron E2 is optimized for efficiency. Audi fine-tuned the power controls and reprogrammed its software to enhance energy efficiency and upgrade performance.

Uwe Breuling, head of vehicle operations at Audi Sport, is ready to put the new model to the test and said:

We have combined all the important lessons in a very short time. The result of our ideas is the E2 evolution. Our development team’s determined and cost-efficient work has prepared us perfectly for our second Dakar Rally.

Audi released the updated rally car after the head of test engineering, Nuibo Bosch, completed his initial tests with the model.

If you want to watch the Audi RS Q e-tron E2 in action, the enhanced rally car will showcase its talents from October 1-6 at the Rally of Morocco.

No matter your opinion on rally cars, Audi’s RS Q e-tron E2 is a beast in every single way. And the fact that it’s beating gas-powered vehicles in the blazing hot desert is even better.

I can’t wait to see what Audi’s second version of the electric rally model will be able to accomplish after already placing first overall.

The Rally in Morocco will be interesting to watch as the second-gen electric rally car makes its first appearance. Keep a lookout for another first-place finish attempt.