Fully Charged Live returns to the US September 10-11 in San Diego – come see us! 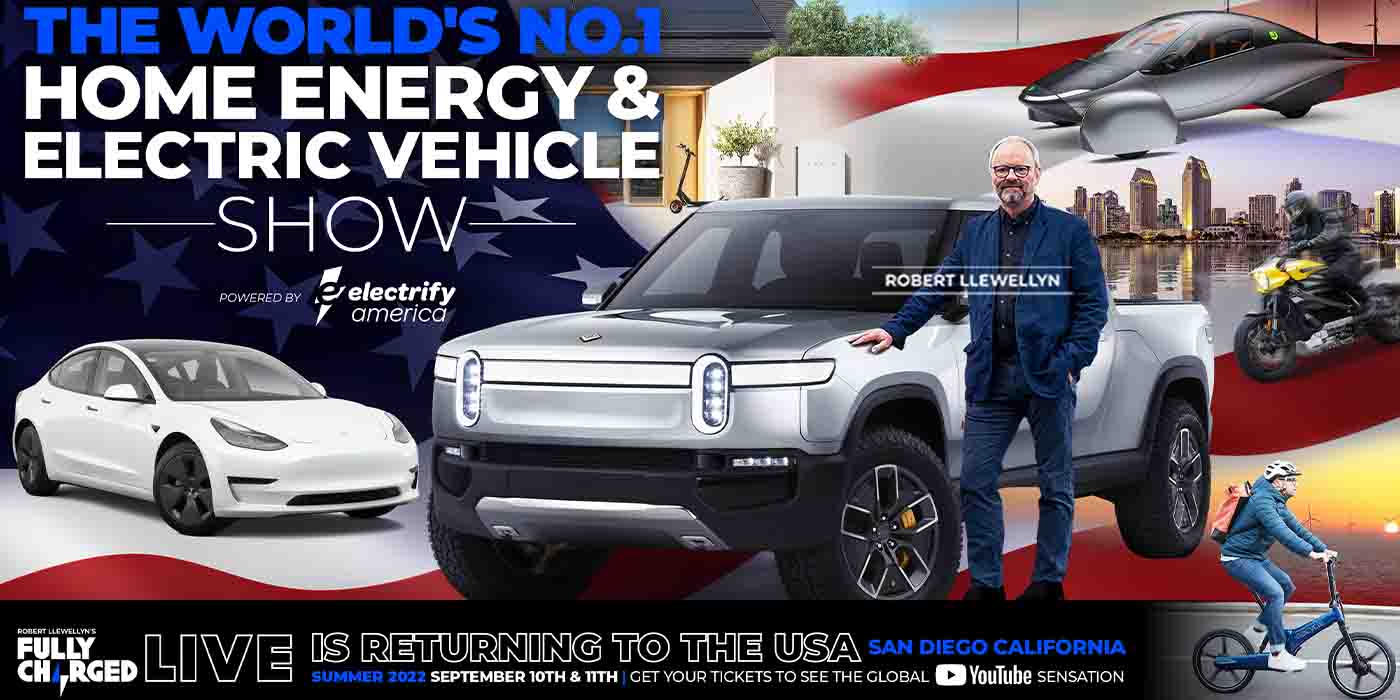 Join Electrek and the crew from FullyCharged.SHOW for Fully Charged Live, coming to the San Diego Convention Center September 10-11. Here’s what you can expect to see.

Much like Electrek, the FullyCharged.SHOW on YouTube has been doing commentary ringside on what is quickly becoming the bout of the century. A battle between Goliath, who runs on oil, gas, and combustion, and David – defender of clean energy and zero-emissions transportation.

Following the success of its premium and informative YouTube content, FullyCharged.SHOW began bringing its passion for knowledge in EVs and renewables to the people, launching Fully Charge Live events around the globe.

Now in its fifth year, organizers expect the San Diego Convention Center to be filled with over 35,000 visitors, who are sure to experience a unique blend of education and entertainment presented in California for the first time ever. FullyCharged.SHOW founder, Robert Llewellyn had this to say:

It’s amazing to bring the show to California at this precise moment. The Inflation Reduction Act and the state’s gas-powered car sales ban will breathe life into the types of technology that we’ve been talking about for many years. Add to that, that California, alongside China, is home to the most progressive companies on the planet, it will be intriguing to listen into expert opinions on our live sessions, and see some of the technologies up close. I can’t help thinking that the issues that have prevented companies like GM from participating, plays into the hands of the start-ups that have secured battery supply and outsourced their manufacturing, and could be the beginning of a self-fulfilling prophecy.

Arguably, one of the most fascinating storylines of this year’s event is that the battle for EV adoption is no longer being fought by Tesla on its own but by a whole host of challenger brands too. Supply shortages continue to plague the entire automotive industry, particularly legacy automakers.

From this struggle comes opportunity, however. At the forthcoming Fully Charged Live event in San Diego, several smaller EV brands are poised to show off their progress and benefit from the exposure. This will include nimbler start-ups like Aptera, Fisker, Indi EV, and VinFast – all of which will be front and center on September 10 and 11.

Visitors will get an up-close look at a wide selection of dozens of electric cars and trucks in the Electric Avenue and Electric Concept Zones. There will also be plenty of electrified bikes and boards spread throughout the Mini Mobility Test Track.

The show will also offer information on home technology. Come speak with the Home Energy Advice Team, where you can meet with experts who can help lower your abode’s total cost of energy.

So come see if San Diego lives up to its nickname of “America’s finest city” at Fully Charged Live. You’ll have access to 40 live sessions across two stages, hosted by the FullyCharged.SHOW channel presenters and panels, featuring some familiar faces like yours truly.

Tickets are available via FullyCharged.LIVE/US, or at the door. (But who wants to wait in line?)

Use the code ELECTREK at checkout for 15% off tickets.