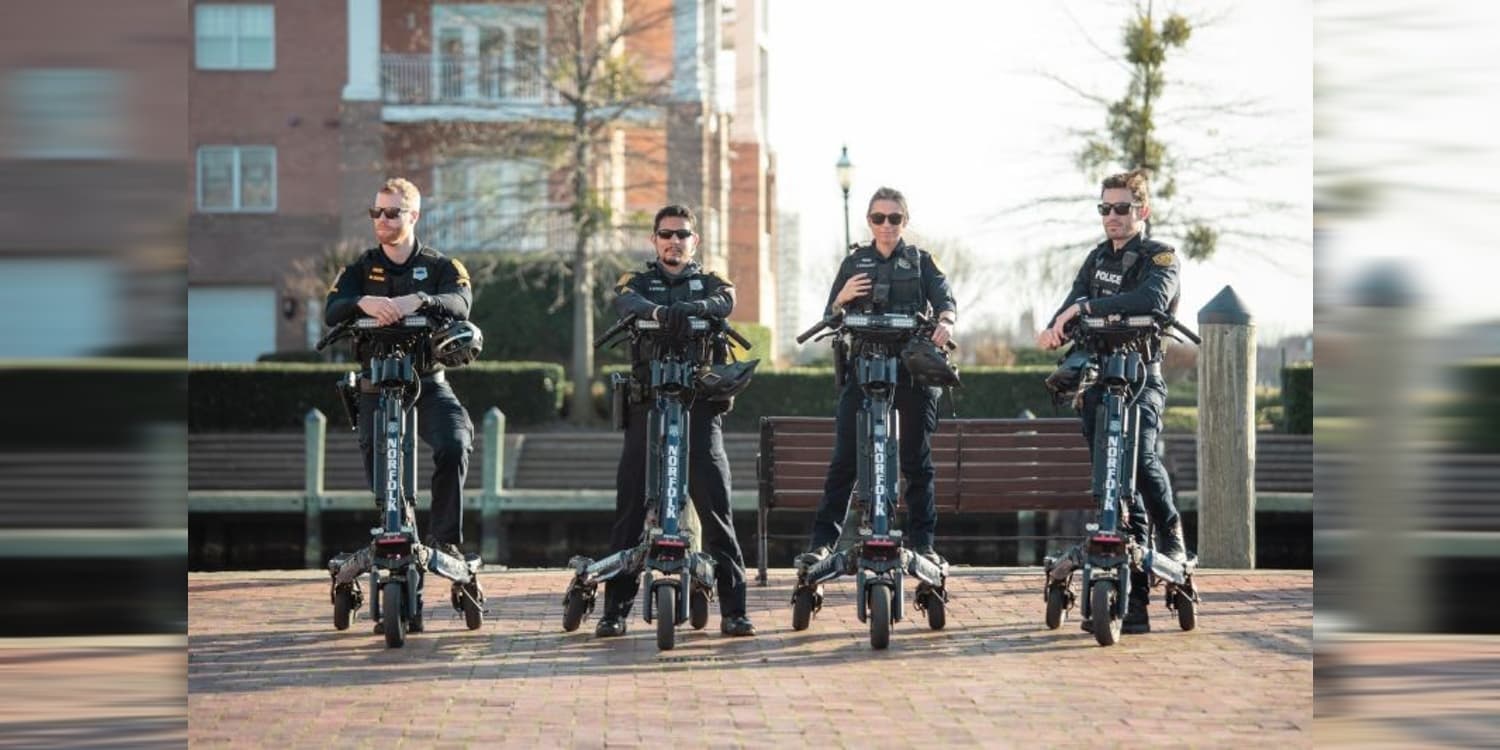 … and they actually look fun enough that I’ve got a half a mind to enroll in my local police academy, if it comes with a standard-issue patrol trike. The Trikke Positron, which is the trike’s official name, is an all-wheel-drive standing electric scooter that very well could have criminals scratching their heads, at least if they weren’t already cuffed behind their backs.

The idea that Trikke is trying to sell is that these are apparently the ultimate patrol vehicles for a beat cop.

According to the company, a Trikke Positron is cheaper and less obtrusive than a squad car, and it’s got fewer moving parts than a patrol bicycle.

Studies have found that moving officers out of their cruisers on to a more approachable mode of transport can result in over twice as much contact with the public. The benefits of beat cops have been evident for years – more impromptu meetings with the public means that citizens have stronger relationships with the officers.

Simply put, getting out of the car humanizes cops, and has tactical benefits as well. Citizens who know their officers may be more willing to share information about the neighborhood they’re in and express concerns, which as a result gives beat cops a clearer picture of the streets they’re assigned to protect.

The Positron shares many of the same benefits an agency can get from establishing a bike patrol: it’s a less threatening presence than a patrol car, it’s less easily spotted by criminals because of its lower profile, it can travel where automobiles can’t, it empowers officers to use more of their senses to identify crime, it saves agencies money and it’s good for the environment. But there are specific benefits to a Positron that a traditional police bike cannot offer.

The battery gives a range of between 25-35 miles (40-56 km), which I assume varies depending on how many perps you’re hauling back to the station with you. The Li-ion batteries are swappable as well, so a fresh pack can be installed if the first is depleted in the middle of a shift.

The Trikke Positrons have a separate motor powering each wheel and full independent suspension to keep the wheels in contact with the ground even over bumpy terrain. The cambering frame can lean hard into the turns, allowing riders to maintain speed and even pull a tight U-turn.

And of course, the police version is tricked out with lights and a siren to go full Five-O when the need arises.

The added 12″ of height above a normal standing adult gives cops better situational awareness in crowds, similar to horse-mounted officers yet without the manure.

So far, officers that have tried the trikes appear to enjoy them.

I really enjoy using the Positron. It has great mobility, speed, handling and visibility. I’m able to ride on the street and go places cars can’t go. It’s perfect around parks and crowds.

According to Chief of Police Joel Maupin of the District of Columbia Housing Authority:

Our communities have seen great success in the past year with our community policing strategies and targeted patrols. With these new Trikkes, our officers will be very visible, but also be able to traverse more ground quickly. Combining our efforts with MPD’s Summer Crime Initiative will help reduce violent crimes across the city.

Look, this ain’t my first rodeo. I know a thing or two about hilarious cop car alternatives. And this is definitely one of them.

On a serious note though, I get that this thing could actually be a very effective police tool, at least on paper. It’s foldable to fit in a cruiser. It’s fast and nimble. It would be great for crowd control since you’re up above everyone’s heads. You can ride faster than a bike without exhausting yourself. There’s almost zero maintenance. You don’t have to gas it up or collect its poop. I get it. There are real advantages.

But I just don’t know how you can watch the po-po roll up on one of these and not bust out laughing. Maybe you get used to it if these are common in your area. And hey, maybe “not intimidating” is a good look for the police to be trying to adopt. If so, then a Trikke Positron would be a giant step in the right direction.

In case you aren’t convinced yet, here’s a video of the contraption in action.