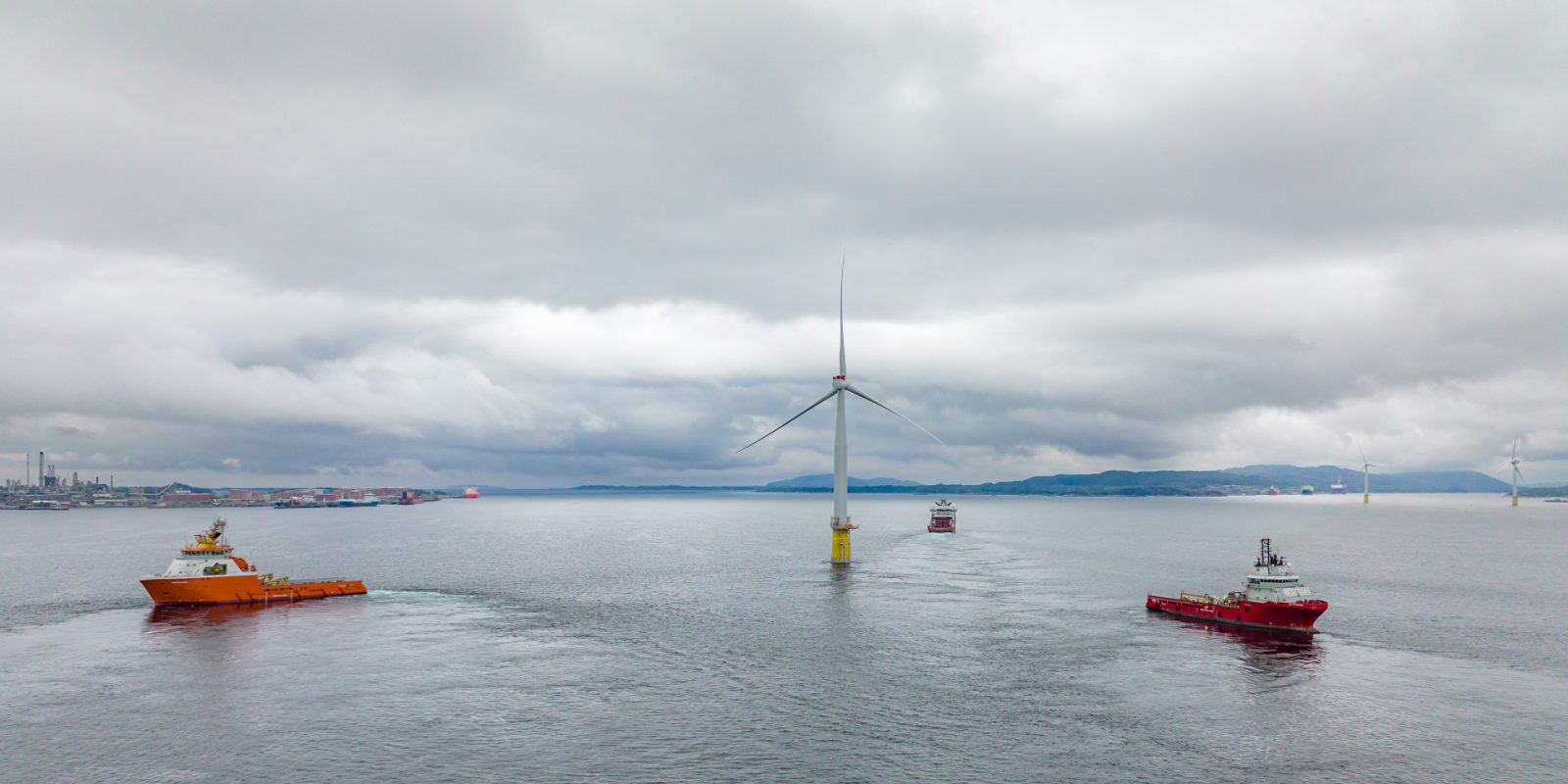 The first of 11 8.6 megawatt (MW) turbines has been installed at the world’s largest floating wind farm, off the Norwegian coast. Hywind Tampen is also Norway’s first offshore wind farm – and it will power offshore oil and gas platforms.

Four wind turbines have been fully assembled by Norwegian power giant Equinor, which is developing and will operate Hywind Tampen. It’s located around 140 km (87 miles) off the Norwegian coast in a water depth of between 260 and 300 meters (853 to 984 feet).

The substructures are cast in concrete and are 107.5 meters (353 feet) tall. Equinor writes:

It will also be the world’s first floating wind farm to power offshore oil and gas platforms.

The 94.6 MW, €488 million ($522 million) floating offshore wind farm will provide electricity for the Snorre and Gullfaks oil and gas fields in the Norwegian North Sea. It will cover around 35% of the five platforms’ annual power needs.

Equinor asserts that the wind farm will reduce the need for locally produced gas power and “thus reduce annual emissions from the fields by about 200,000 tonnes of CO2, which is equivalent to emissions from 100,000 vehicles.”

Hywind Tampen is scheduled to start producing power in the third quarter of 2022.

I initially got very excited about this news, and then felt deflated when I remembered what it’s going to do.

Norway is the world leader in the most electric cars per capita; it’s planning planning 30 GW of offshore wind by 2040. But it’s also Western Europe’s largest oil and gas producer. The petroleum sector makes up around 40% of Norway’s exports and 14% of its gross domestic product.

The Norwegian government says it will work to cut the country’s net emissions by 55% by 2030 from 1990 levels. That’s aligned with EU targets. But unlike its EU neighbors, Norway says its move to clean energy will be gradual and has no intention of giving up oil and gas exploration.

Norway says it will honor a plan to raise the country’s carbon tax to 2,000 Norwegian kroner ($230) per metric ton. But in April, the WWF rightly called for Norway to stop all oil and gas exploration. WWF secretary-general Karoline Andaur said:

Norway must immediately stop all new exploration for oil and gas, formulate a plan to reduce production from existing fields, and ensure that all choices made are in the best interests of the climate.

As the world’s seventh-largest exporter of CO2 emissions, we stand at a historic crossroads. Now is the time to take our rightful responsibility and contribute to emissions cuts.

The WWF is right. Norway can and must do better.