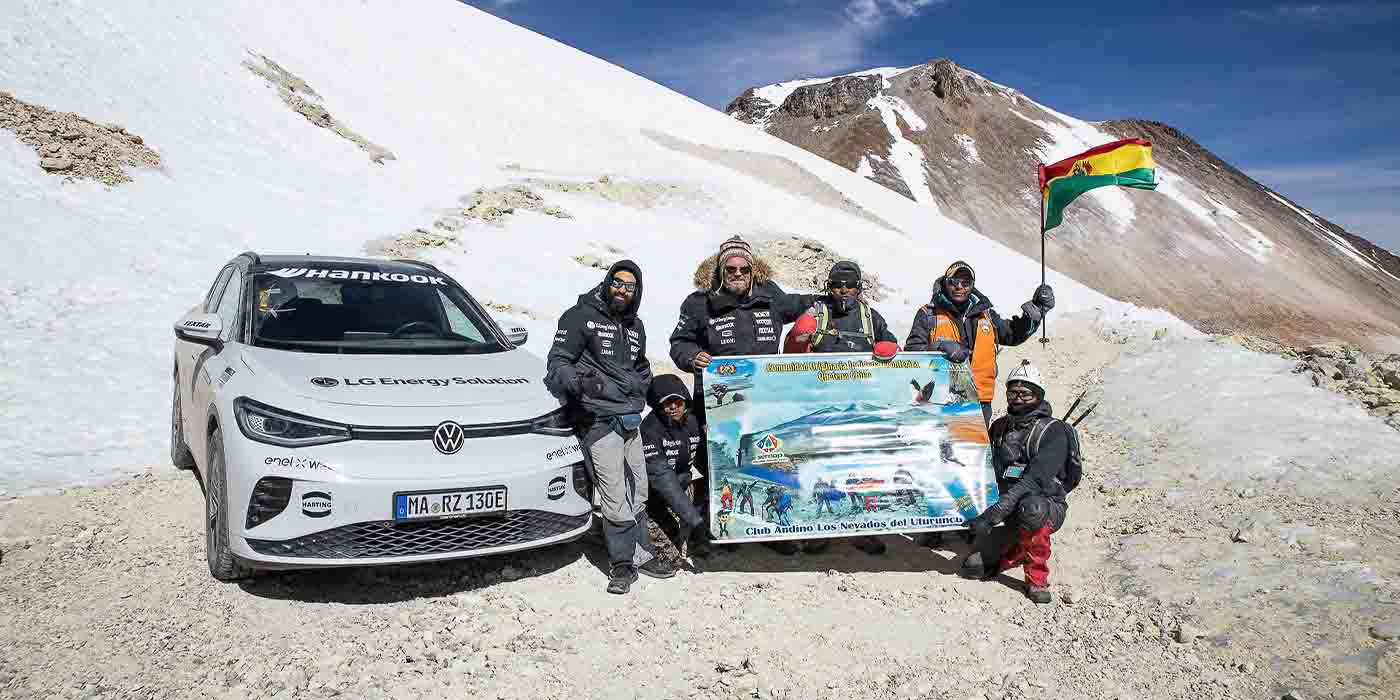 A Volkswagen ID.4 GTX has set a Guinness World Record for the highest altitude achieved in an all-electric passenger vehicle. The ID.4 equipped with Monroe Intelligent Suspension CVSAe technology from Tenneco was driven by international adventure driver and multiple record holder, Rainer Zietlow.

Volkswagen’s ID.4 began production in 2020 as the first all-electric crossover SUV donning the VW badge. Originally promoted as an EV “for the millions, not the millionaires,” this mass market vehicle has found a home with a number of consumers throughout Europe, North America, and China.

Out of the consumer level ID.4 models has come the GTX, an upgraded version both aesthetically and performance-wise. The ID.4 GTX has additional tweaks to its chassis including a sports suspension to keep the entire EV level on corners and maximize grip, no matter the terrain. Unfortunately for US consumers, the ID.4 GTX is not available for sale.

One of Volkswagen’s fans overseas, however, is very familiar with the ID.4 and other VW EVs. Reiner Zietlow has accomplished several world records in Volkswagen vehicles. In July of 2021, Zietlow drove an ID.4 from Volkswagen HQ in VW Herndon, Virginia, counter-clockwise through all 48 continental states on a ninety-seven day journey.

By October, Zietlow had achieved a Guinness World Record in the ID.4 by by driving 35,770 miles continuously in one country with an EV – more than doubling the previous record.

In his most recent journey, Zietlow has achieved another record in a Volkswagen ID.4, this time setting his sights on elevation rather than distance.

News of the successful summit was shared by automotive parts manufacturer Tenneco, whose CVSAe Semi-Active Suspension is commercially available on both the ID.4 crossovers and ID.3 sedans.

Reiner Zietlow and his three person support team began their twelve-day journey in Santiago, Chile, heading north through Argentina to the Sur Lípez province of Bolivia at the base of Cerro Uturuncu – a dormant stratovolcano.

On day eleven, Zietlow and his team achieved the Guinness World Record in the ID.4 by climbing the volcano to an elevation of 5,816 meters (19,081 feet), besting the previous record of 5,771 meters (18,933 feet) without relying on a winch or other auxiliary equipment.

The team driving the record setting Volkswagen ID.4 used the Enel X Way wall box network to recharge throughout its route from Argentina to the base camp in Bolivia. In total, Zietlow and his team drove 3,039 km (1,888 miles) through South America on twenty-three charges.

According to Zietlow, who’s successful climb marked his fifth Guinness World Record, the aim of the South American journey was to demonstrate that EVs can perform everywhere, even at extreme altitudes.

The Challenge4 team documented the entire journey in blog posts, images, and video. Here’s some footage of record day in the Volkswagen ID.4 GTX: