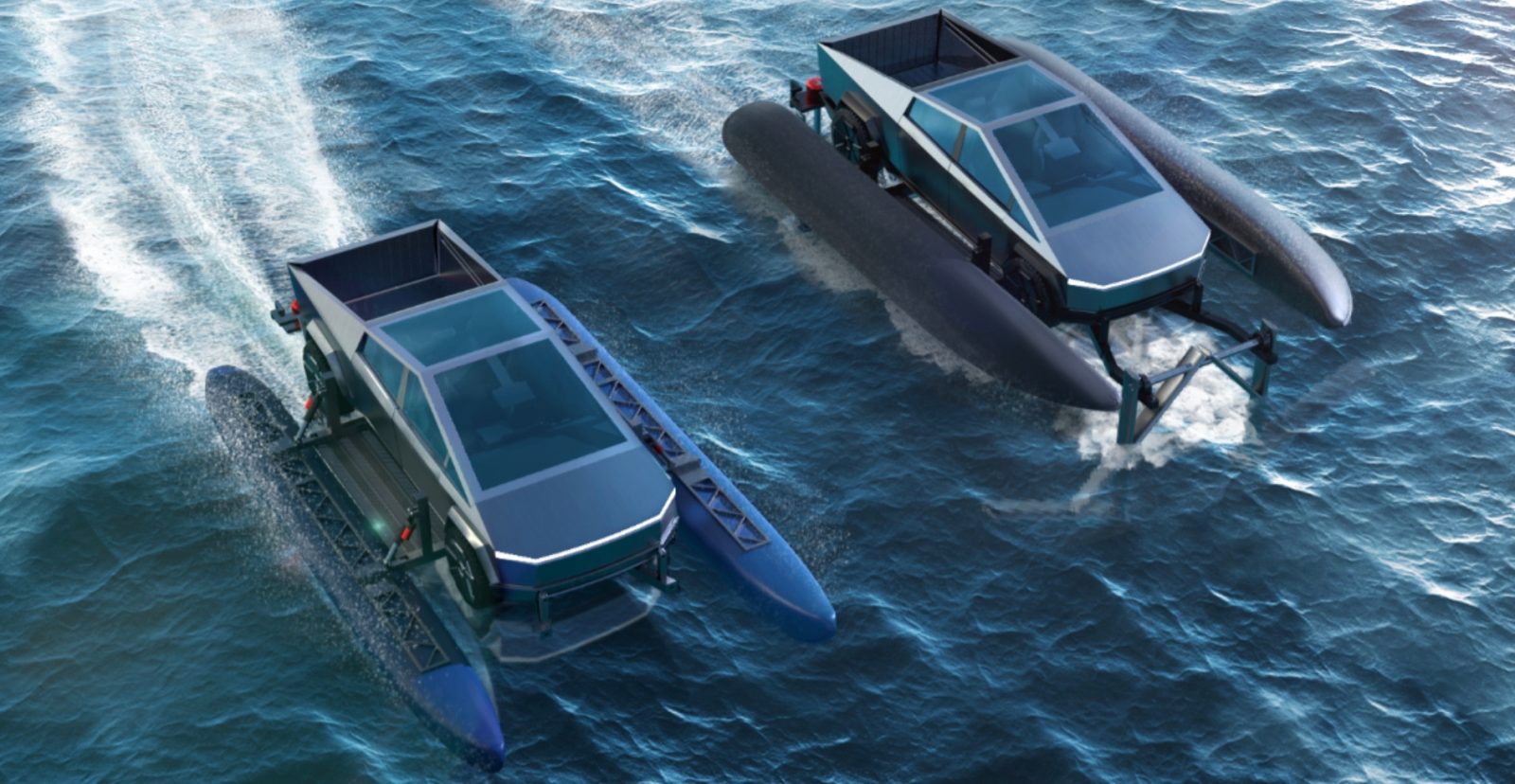 While the Tesla Cybertruck has recently been delayed again, the hype is so strong around the electric pickup truck that some people are already working on thrid-party accessories for the vehicle.

Now, we see the most ambitious project yet, a kit that transform the Tesla Cybertruck into an electric boat.

When it comes to ambitious Cybertruck accessories, I thought that nothing could beat the Cyberlandr, which is trying to fit a full camper into the electric pickup’s bed. But I was wrong.

I believe the newly announced Cybercat Catamaran is an even more ambitious new product designed for the Cybertruck. The project was launched by Anthony Diamond, a Phd in material science from Berkeley and a serial entrepreneur.

On a new website for the concept, they explain what prompt them to develop the Cybercat:

As an early Cybertruck reservation holder and a Model 3 owner, Anthony was excited about tweets from Elon that indicated the Cybertruck should be able to serve as a boat for short periods. However, this capability would ultimately be limited by the speed at which wheel rotation could propel the vehicle and it would never go fast enough to be compelling.

The concept consists of an easy-to-assemble kit that can attach to the Cybertruck to turn it into a catamaran:

It is equipped with 1 to 5 50 kW outboard motors, which they aim to have powered by the Cybertruck’s battery pack.

Combined with the Cybertruck’s adaptive air suspension, the concept could potentially make the Cybercat amphibious:

The adaptive ride height of the Cybertruck and the folding inflatable pontoons of the Cybercat provide 12” of ground clearance. Once in the water, the electric outboard motors, pontoons, and hydrofoils fold down, and the wheels retract out of the water for quick takeoff. In shallow water or around docks, Cybercat can precisely maneuver propelled by the wheel rotation of the Cybertruck.

While there’s no working prototype yet, they are anticipating a top speed of over 25 mph (22+ knots) and a range of 50 to 115 miles depending on cruising speed – this is based on a Cybertruck with a range of over 500 miles on land.
‍
The company is aiming for a price of $22,900 to $32,900, depending on the number of outboard motors.

The company is also planing to do a hydrofoil version of the kit for higher speed and efficiency:

The Cybercat Foiler takes this one step further by adding hydrofoils to maximize efficiency on the water and unleashing industry leading performance for all-electric watercraft.
‍

It would increase the price of the package by about $10,000.

The whole concept is still in the early stages of development and unlike the Cyberlandr, they are not taking reservations just yet, but they are talking about it as they test the market.

It is risky to start such an ambitious project based on a truck that has been delayed several times already. Last month, Tesla confirmed that the timeline for the Cybertruck has been pushed to at least 2023.