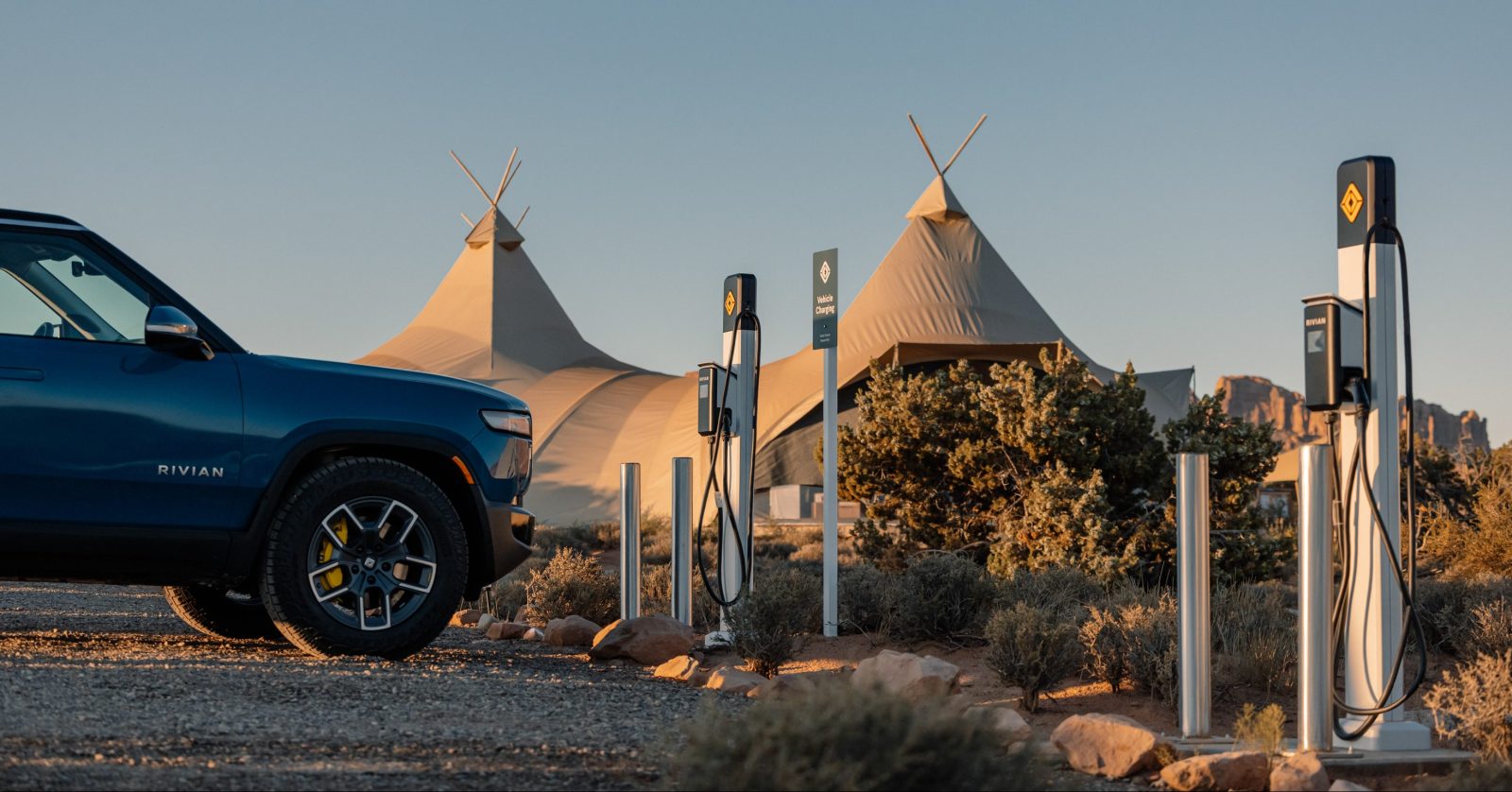 Rivian announced a new partnership with Under Canvas to bring EV charging to some of the most beautiful campgrounds in the US.

Since the beginning, Rivian has been marketing its electric vehicles as “adventure vehicles”. They made an electric pickup truck that is good enough to do anything a gas-powered pickup can do and more, so it made sense to emphasize that with putting the vehicles in adventure scenarios.

One challenge in making that a reality is deploying charging infrastructure where the adventures are, which are – more often than not – in remote areas.

Under Rivian Waypoints, it is now partnering with Under Canvas to deploy charging stations directly at camp sites:

Today, Under Canvas and Rivian announced a first-of-its kind partnership between the two brands, with the addition of the electric vehicle maker and automotive technology company’s open-network Waypoints chargers to the upscale, outdoor hospitality brand’s camp locations. Rivian Waypoints will be available for guest use at Under Canvas Moab and Under Canvas Lake Powell-Grand Staircase in time for the 2022 season. The locations mark Under Canvas as Rivian’s first hospitality partner. The agreement supports both companies’ missions to make outdoor exploration more accessible and encourage people to adventure responsibly by reducing their carbon footprint while exploring the country’s most iconic national parks and monuments. The Rivian Waypoints chargers are exclusively for guest use during months of operation, and operational for all electric vehicles.

Under Canvas is known for its luxury camping sites at some of the most beautiful locations in the US, including Zion, Moab, Grand Canyon, and more.

Here are a few pictures of the chargers deployed at the Moab location:

May Lilley, Chief Marketing Officer of Under Canvas, commented on the partnership:

The fast-growing adoption of greener vehicles in an effort to reduce carbon emissions made our
decision to partner with Rivian to provide charging stations at our camps an obvious choice for both our guests and the environment. We’re thrilled to be adding another initiative to our efforts to support our mission and core values which include respect for the environment, allowing and supporting more responsible and sustainable adventure. In fact, we’re pleased to share that through Earth Day, guests of Under Canvas Moab or Lake Powell-Grand Staircase who visit and stay with us will enjoy charging their electric vehicles, on us.

While they are starting with these two sites, they plan to expand to more in the future.

Trent Warnke, Senior Director of Energy and Charging Solutions at Rivian, commented on the partnership:

Partnering with Under Canvas felt very natural as we both aim to inspire adventure and challenge
ourselves to do this in environmentally thoughtful ways. We look forward to integrating Under Canvas’ extraordinary campsites with our Waypoints charging network – a network that’s planned to have over 10,000 open-network chargers.

Like all charge points in the Rivian Waypoint network, the stations being deployed are level two stations, meant primarily for overnight charging.

For people familiar with Tesla’s charging infrastructure, it is the equivalent of Tesla’s Destination Charging network, which is primarily available at hotels.