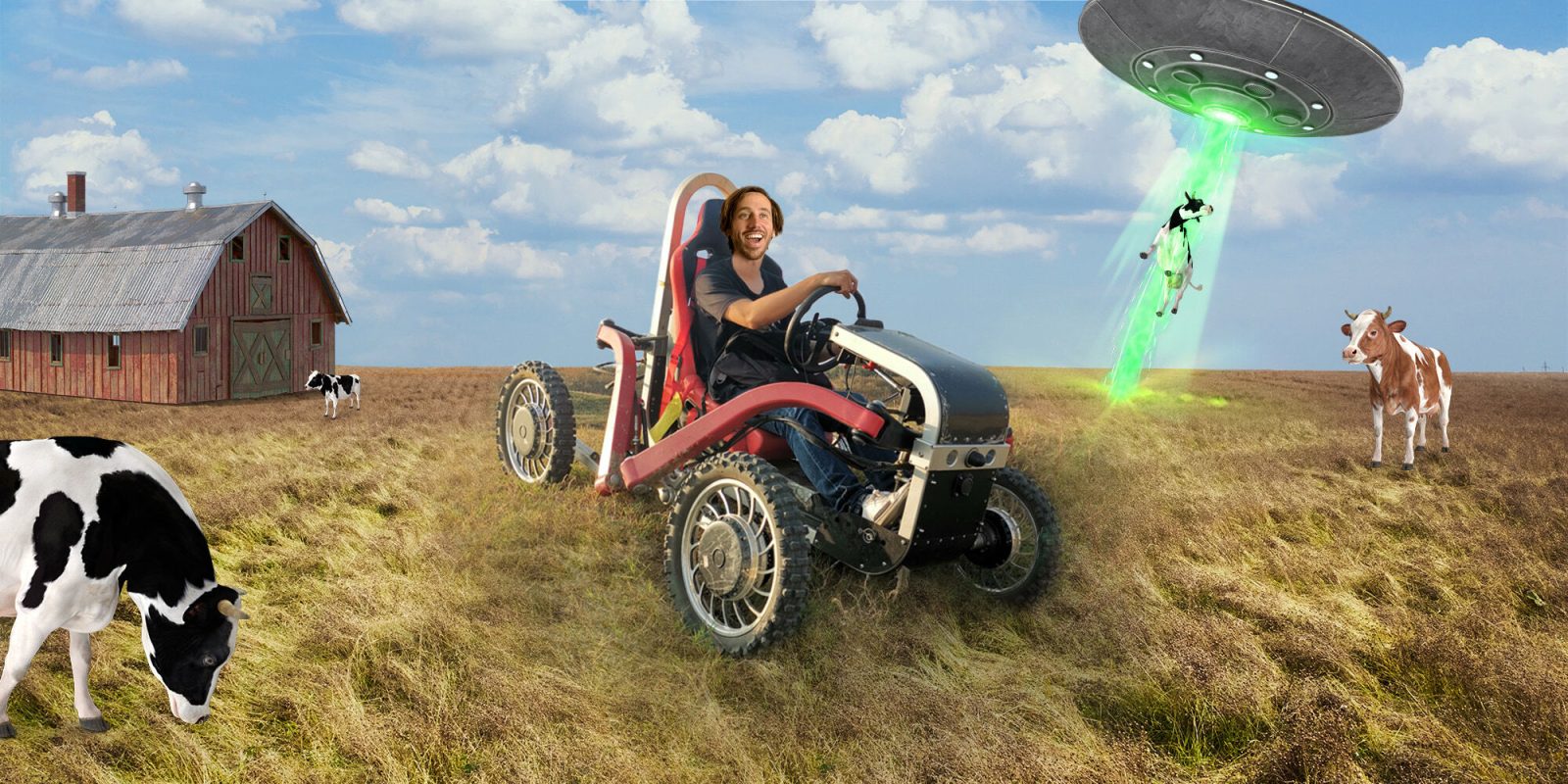 When I set out each week to find the wildest electric vehicles for my regular Awesomely Weird Alibaba Electric Vehicle of the Week column, they are usually at least classifiable into categories like “bikes”, “cars” and “scooters”. But every now and again, I find something so wacky that it simply defies classification.

The latest example of Lamarckian evolution run amok on the most infamous Chinese shopping site of all is this funky “Spider Bike”.

What the dickens is a Spider Bike? Well, it is so anti-classification that even its name makes no sense.

For starters, it’s not a bike, and it’s also four legs short of a round eight. But I’m going to keep calling it the Spider Bike, because the only other option is to use its model number, which is YUEHEZHIZHUCHE03. Seriously.

“Spider Bike” it is.

And nomenclature aside, there’s something oddly enthralling about the Spider Bike. Its articulating arms, full independent suspension, race car seat, and four-point harness give it an aggressive look that seems to meld Mad Max vibes with something that escaped from an amusement park.

But even if it’s got a face only a mother could love, the functionality sure seems like a lot of fun.

All four of the arms (legs? transporters?) move independently, and so it looks like you actually get a pretty stable ride even when traversing gullies and other extreme topographical anomalies.

It’s also got four-wheel drive thanks to each wheel housing a direct drive hub motor. There’s no power rating, but each of those motors looks like it could easily be in the 1-2 kW range. A total of 4-8 kW, or up to around 10 hp, sounds like a lot of fun on a half-amputated mechanized spider.

And considering the thing can hit speeds of up to 48 km/h (30 mph), it definitely sounds like its got some power behind it.

The Spider Bike also comes with a max payload of 200 kg (440 lb), meaning you could use this monstrosity for some utility work, too! Imagine pulling up to Home Depot in this contraption and loading up a few bags of cement – that is, if you can still afford to go shopping after buying one of these. With a price of US $7,385, it’s one of the more expensive oddball Alibaba electric vehicles I’ve featured on these pages. And that’s before you even ship the thing halfway around the world.

I was kind of hoping it would disassemble into something the size of suitcase so that it’d be easy to ship. Sure, it’d take 6-8 weeks to assemble it again, and you may never get all the bits and pieces in the correct places, but at least the freight wouldn’t cost an arm and a first born.

But no, check out the shipping crate they package this thing in. You could practically back up the Suez Canal again all by yourself!

Hell, you might as well save the crate when you’re done and rent it out as a studio apartment. Or put a tarp over it and use it as a detached garage for parking your Spider Bike.

Look, regular readers will know that I’m no stranger to buying dumb awesome things I find on Alibaba. For some reason, millions of people have tuned in to watch me gamble away my paycheck on an electric mini pickup truck and other weird things from China.

So I’m sorry to disappoint you fine (I’m assuming) folks, but this Spider Bike isn’t going to be joining the party at my house anytime soon.

But that’s probably for the best. Just look at the how much fun the dudes from the Chinese factory are having driving it in the video below. I’d hate to take it away from them.

If that wacky electric Spider Bike wasn’t enough for you, check out some of the other fun and crazy things I’ve found in the past!

And if you happen to find something interesting in the millions of pop-ups that Alibaba is sure to serve you, feel free to send it my way! My email address is in my author bio below, and if your suggestion is weird enough, then you might just find it featured here next week!