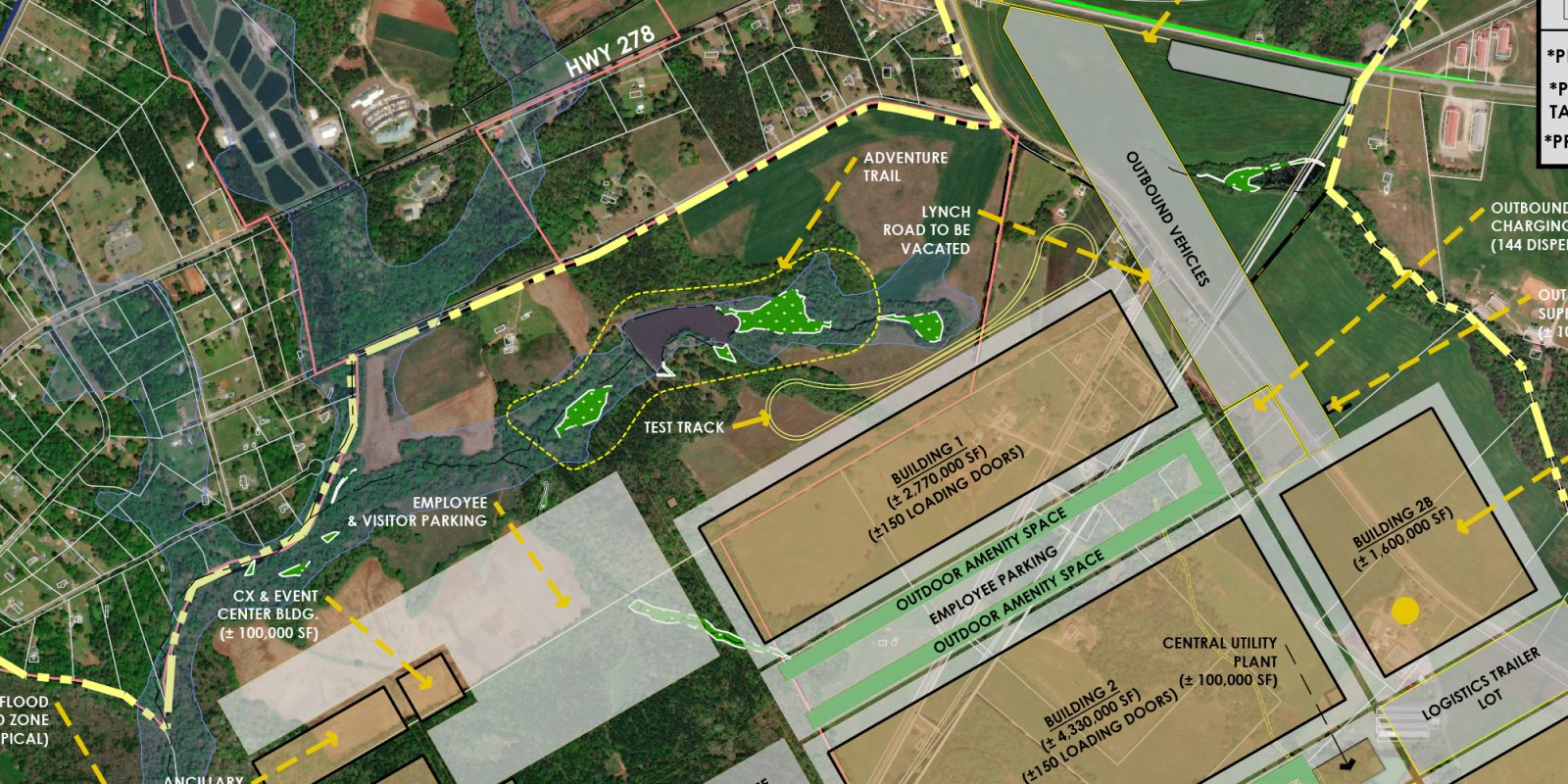 Site plans uncovered by a member of Rivian Forums reveal that the American automaker’s second manufacturing facility in Georgia is going to be huge. In fact, the current plans account for nearly 20 million square feet across nearly 2,000 acres – over five times the size of Rivian’s plant in Normal, Illinois.

Rivian is an American automaker on the cusp of delivering its second of two flagship EVs in the R1S SUV. Currently, all of the company’s EVs are manufactured at Rivian’s initial facility located in Normal.

The Illinois facility was originally a Mitsubishi plant before Rivian acquired it in 2017, four years before delivering its first passenger EV. Since then, the automaker has already had two additions approved by the Town of Normal totaling 672,000 more square feet.

Last October, Rivian announced plans to add another 623,000-square-foot addition to the existing facility, which would bring its total size to nearly 3,900,000 square feet.

This past December, we shared Rivian’s news of a second, larger facility planned for Georgia 30 minutes east of Atlanta. Rivian stated it expected to begin EV production at the $5 billion Georgia plant in 2024. Here’s some words from Rivian at the time:

The plant, which will eventually employ more than 7,500 workers, represents a key next step as Rivian scales aggressively toward higher-capacity production for our future generation of products. Once ramped, the Georgia facility will be capable of producing up to 400,000 vehicles per year. Construction on the facility is expected to begin in summer 2022, and the start of production is slated for 2024. Site considerations included logistics, environmental impact, renewable energy production, availability and quality of talent and fit with Rivian company culture.

Now thanks to a recent forum post, we have our first glimpse at the potential Rivian site in Georgia, and it is massive.

Tip of the hat to Rivian Forums member AdamsFan1983 for sharing the Rivian plans above. As you can see from the map and the descriptions, Rivian is going all out on its second facility, erecting nearly 20 million square feet of building across about 2,000 acres of Georgia earth.

The site will be home to 13 separate buildings including an R&D space, a training facility, and a delivery center. The future Rivian grounds in Georgia will also house 144 exterior chargers for outbound EVs (and maybe employees?), a test track, and an “adventure trail.”

In addition to the planned areas on the site map, the planning notes also state the following:

In addition to those noted on the plan, on-site uses may include other uses allowed under the Tier 1 zoning designation including but not limited to: manufacturing, warehousing, accessory buildings, office, medical clinic, research and development, recreation facilities, restaurant, training, day care, hotel, health club, solar, wind, and other similar environmental forms of energy production.

We’d sure love to see what a Rivian hotel or health club looks like. The automaker has not confirmed nor denied these plans, but they seem quite legitimate and match a lot of the descriptions made by the company back in December. More as it evolves.