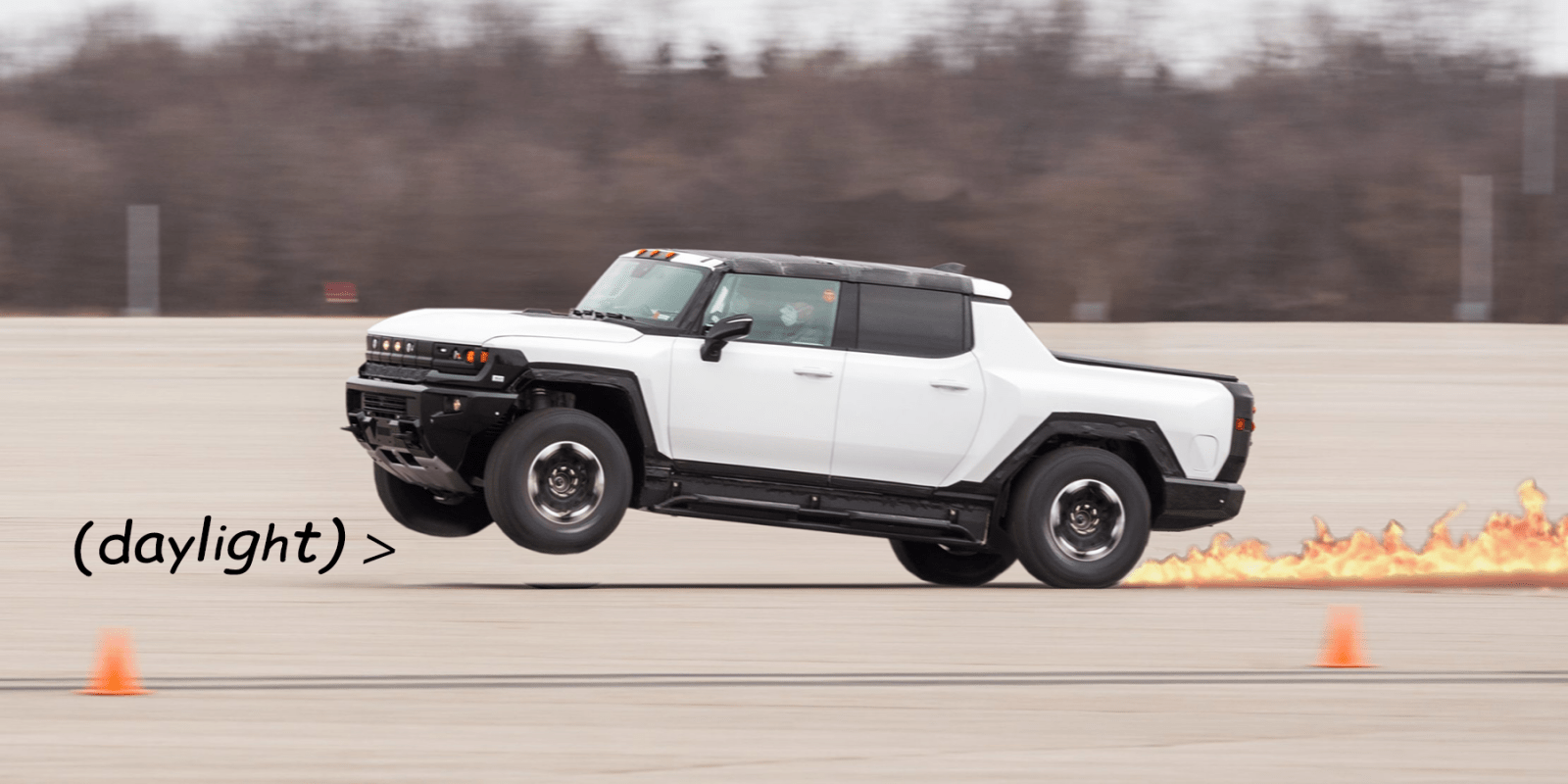 A 9,000-plus lb., 1000 hp, three-motor, all-wheel drive mechanical monster, the new GMC Hummer EV defies most people’s understanding and expectations of what a car can do. Astonishingly, this nearly five-ton beast can rocket from 0–60 mph in 3.0 seconds in production trim – which is impressive enough, until you find out that the prototypes could do wheelies!

You read that right. GMC’s new Hummer can pop a wheelie if the conditions are right. That’s according to the vehicle’s chief engineer, Al Oppenheiser, who told the story to Peter Holderith over at The Drive.

Update, we’re told the Drive misrepresented the story and the 9000lb pickup didn’t and can’t in fact do a wheelie.

“In the early days when we were just trying to balance the front and rear torque, I got the front end to lift (in WTF, or Watts to Freedom, mode),” says Oppenheiser. “We had to back off the torque on the front end.” As delivered (to that one guy, presumably), the three-motor Hummer can still absolutely roast all four of its 35-inch Goodyear A/T tires from a standstill … if not halfway down the eight.

Not the only wheelie-fast EV

The big electric Hummer isn’t the only EV known to be able to pop wheelies on the regular. Back in 2008, with Tesla on the verge of bankruptcy, Elon Musk struck a deal with Mercedes-Benz to develop an electric Smart car. There were a few problems with this.

You can probably guess what happened, but I’ll tell you anyway: Tesla took a Roadster drive train and stuffed it underneath an otherwise bone-stock Smart ForTwo. The end result was something Elon Musk called, “the fastest car ever made … It was so fast you could do wheelies in the parking lot.”

Doug Dirac posted a video of the Tesla-powered Smart ForTwo back in 2009, during the Menlo Park Model S unveiling party. He talks about first gear being “interesting,” and gives it a blast down the back lot. It looks quick, if not quite as quick as the new Hummer.

Whether you’re putting a powerful electric motor into a Smart car or a ’72 Plymouth Satellite, it’s going to be quick off the line. That’s just the nature of electric motors because they produce maximum torque at 0 rpm, as opposed to an internal combustion engine that needs to “rev” in order to reach its peak output. With enough traction, torque, and the right (or, wrong, I guess) weight distribution, you’ve got wheelies.

All of which, of course, begs the question: Can the production Hummer do a wheelie? “However, when it comes to the production versions of the hefty 4×4, [Oppenheiser] made it clear that, for ‘functional safety reasons,'” writes Holderith, in his original article, “that wouldn’t be in the Hummer’s big bag of tricks.”

Source | Images: mostly rumors and hearsay from The Drive.