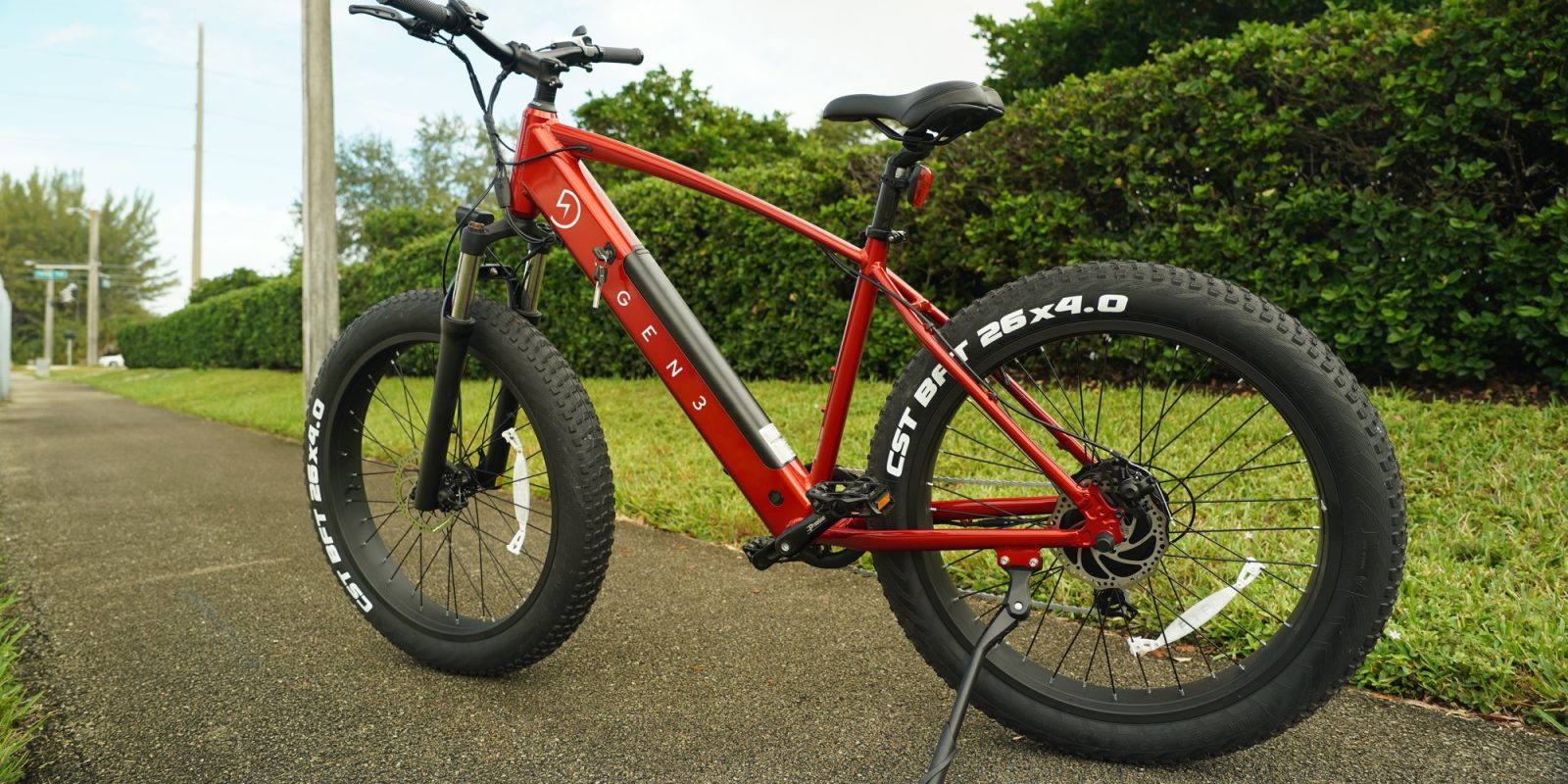 Fat tire e-bikes are tons of fun for both on and off-road riding, but their large proportions don’t always look the best. The Gen3 Outcross manages to maintain a sleek-looking frame despite rocking big ol’ 4-inch fat tires.

And while we try not to judge a book (or a bike) by its cover, I’ll never say “no” to a nice-looking fat tire e-bike.

The Gen3 Outcross is even quite modestly priced in relation to its specs.

The reasonably powerful e-bike is currently on sale for a great price of just $1,399 with the coupon code BF300, marked down from its MSRP of $1,699.

Make sure to check out my test riding video of the Gen3 Outcross e-bike below. Then keep scrolling for the rest of my thoughts on this fun-loving electric bike.

The thing that really makes the Gen3 Outcross stand out is that bright red frame with the nicely integrated battery.

The shiny paint really pops, unlike most simple matte e-bikes.

But the inclusion of the integrated battery pack results in surprisingly clean lines for a large-format electric bike.

I got multiple compliments from strangers about how good the bike looked, which is a quasi-effective method I use for judging the looks of e-bikes I ride. The more people that are saying “Whoa, nice looking bike!” to me at intersections and parks, the more I trust my own subjective opinion.

The downside of fully integrated batteries is that they are limited in size. There’s only so much battery you can shove into a bicycle frame before you run out of space.

The Gen3 Outcross’s 500Wh battery is a bit below industry averages, especially for inefficient fat tire e-bikes that take a bit more power to get those big tires rolling through loose terrain.

These days we’re usually finding batteries in the 650Wh range on fat tire e-bikes, and sometimes much more.

The 35 mile (56 km) range rating granted by that battery is of course the pedal assist range, meaning you’re doing at least some of the work yourself.

You can select the pedal assist intensity and max it out if you want an easy ride, or you can go throttle-only and ride it like a motorbike.

The throttle is integrated into the display on the left side of the bars, which I actually like.

One thing you should probably know about me though is that I’m a right side half-twist throttle purist at heart, so left side thumb throttles aren’t my favorite.

Half-twist throttles simply offer the best control, especially on off-road or bumpy terrain where the thumb throttle would be bouncing up and down along with the handlebars.

But if you’re going to give me a thumb throttle, then I at least like this design where it is incorporated into the display. It takes up less space on the bars by combining two components into one and it looks less busy.

We don’t see this combined throttle/display setup often, but I like it.

The bike is more powerful than I expected for a 500W motor, though they do point out that it’s a 1,000W peak-rated motor. That likely means a 20A or 22A controller paired with that 48V battery. I wouldn’t call it “wow” power, but it was plenty for all of my recreational riding on flat and rough terrain.

The speed limit is capped at 20 mph (32 km/h), which is frustrating for those of us that like to go faster. But it keeps the bike legal as a Class 2 e-bike and also helps that battery last longer by not draining more power than necessary at high speeds. Trust me, 20 mph on off-road trails feels plenty fast!

For what it’s worth, I did play through the settings in the display and did not see an easy way to hack the speed limit.

The pedal assist is cadence sensor based, which is what you’d expect at this price. That means there’s a telltale lag of about a second from when you apply force to the pedals until the motor kicks in. It’s not a deal breaker, but it’s noticeable.

Another thing that surprised me was how small the front chainring is. Pedaling at 20 mph (32 km/h) is a bit higher cadence than I’d like due to the somewhat lower gearing, and so perhaps it’s good that the bike doesn’t go any faster or you’d run out of gears.

A few more teeth on the front chain ring would be a nice addition. But again, this is a 20 mph bike and so that’s probably why then went with a smaller chainring.

The disc brakes are plenty fine, though they aren’t any brand name. I would have loved to see some basic Tektros there, but with supply chains being what they are, everyone is struggling for parts.

The brakes worked well for me, even if the 160 mm rotors were a bit on the small side. I could still easily lock the wheel up and so braking force wasn’t a problem. If you’re doing long downhill sections, the smaller discs will warm up faster. But this is more of a recreational bike anyways. Even if you live in a hilly environment, you’re probably not going to be bombing downhills like a competitive cyclist on a fat tire bike.

The one area I do want to ding Gen3 on is the battery-powered tail light mounted on the seat post.

They went most of the way there toward good e-bike lighting by including a front headlight that runs off the main pack. But the rear light is AAA battery powered, which is a pet peeve of mine.

I don’t want to have to change out little finger batteries when I have a giant freaking battery between my knees that I’m already charging up everyday. It just makes sense to run all your lights off of the main e-bike battery, doesn’t it?

Though to be fair, many e-bike companies looking to save a few bucks simply leave off the tail light altogether and avoid the hassle of running wiring up the seat tube, so props to Gen3 for at least giving us something to let cars know we’re in front of them.

Even though I’m complaining about the rear light, I’ve got to say that I’m quite happy with the bike as a whole.

It’s super fun to ride on trails and even in the bike lane, and it looks darn good too.

At a time when so many e-bikes still come with crazy graphics, bolt-on batteries, and a rat’s nest of wiring, the Gen3 Outcross’s attractive styling is a rare sight for sore eyes.

The $1,699 MSRP is a bit of an ask, though not unreasonable compared to similarly priced e-bikes that don’t look this good. But the current sale of $1,399 with the code BF300 makes this a truly great deal for an affordable and slick-looking fat tire electric bike.