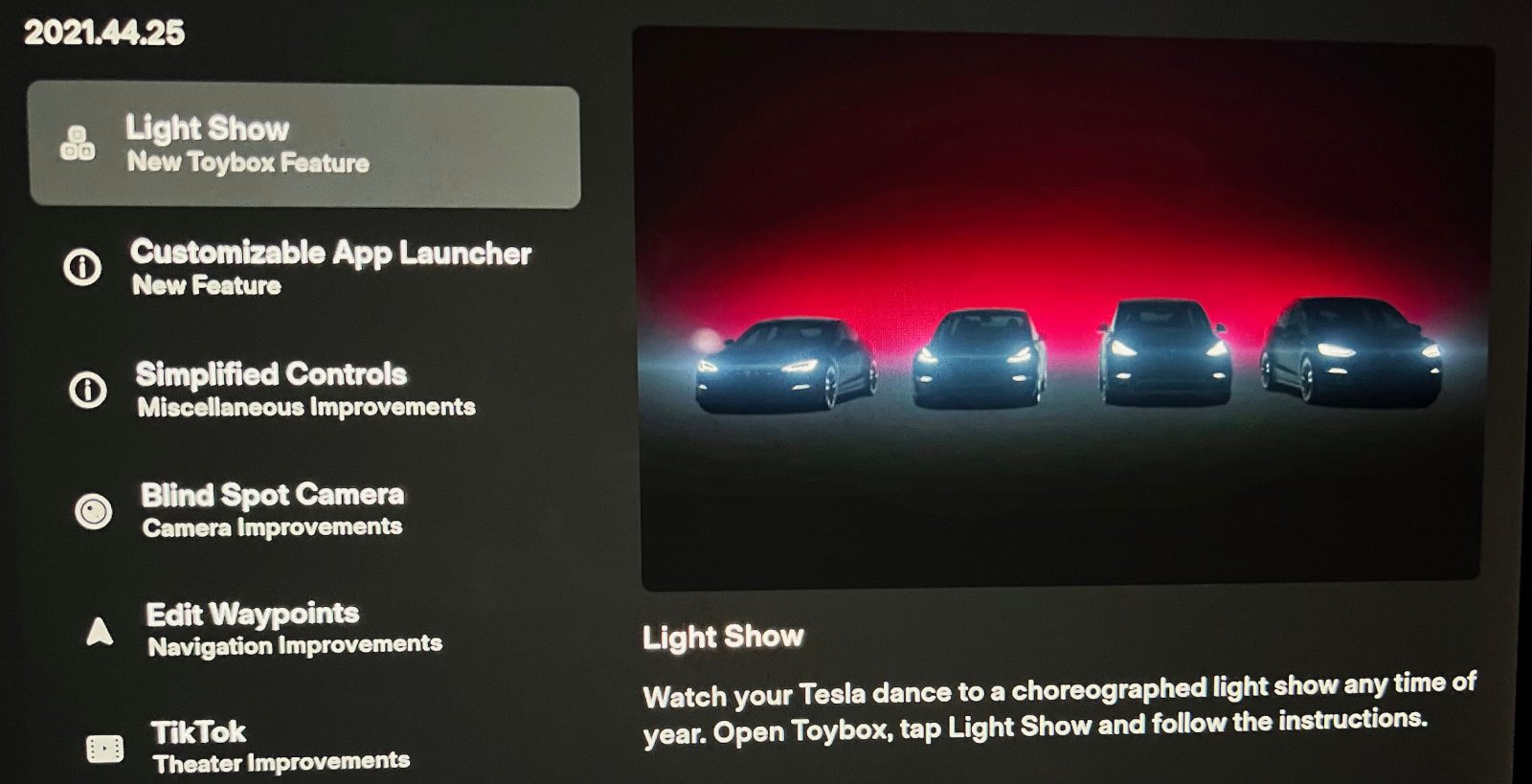 While Tesla generally pushes new features through software updates whenever it is ready, it is also known for bundling some of those more fun features for a bigger ‘holiday update’ toward the end of the year.

Today, the automaker has started releasing the 2021 holiday update (version 2021.44.25) to the fleet, and it includes lots of goodies.

Watch your Tesla dance to a choreographed light show any time of year. Open Toybox, tap Light Show and follow the instructions.

That’s a feature that Tesla first introduced as an Easter Egg in the Model X back in 2015, and the light show was matched by flapping falcon-wing doors.

Now it looks like the light show part of the Easter Egg is available to all other Tesla vehicles.

Drag and drop your favorite apps to any position along the bottom menu bar for easy access. To customize your menu bar, hold any icon and then drag to reorder. To adjust climate controls such as heated seats and defrost, tap on the temperature or swipe up from the bottom of the screen.

Over the last year, Tesla has been allowing more customization of its main screen and this is a new addition.

It comes with other UI changes in the holiday update:

The display has been simplified to focus on navigation, media and the most common primary controls.

Note: Activating the windshield wipers via the stalk will continue to display the wiper card.

You can now change to a dark themed display. Tap Controls > Display > Appearance and select Dark.

You can now automatically see a live camera view of your blind spot whenever you activate the turn signal. To enable, tap Controls > Autopilot > Automatic Blind Spot Camera

Easily reorder or add multiple destinations to your route with updated arrival times. To add a stop, or edit a trip, initiate a navigation route, and tap the more options button on the turn list.

Tesla Theater, the platform where Tesla integrates streaming apps, is getting a new addition:

You can now watch TikTok from your touchscreen. To launch, tap the Theater icon from the bottom bar and select TikTok while your car is in park.

Along with the Tesla Theater, Tesla also has an ‘Arcade’ where it ports video games.

In this year’s holiday update, the automaker is adding Sonic the Hedgehog.

Jump into the original Sonic the Hedgehog! Speed by in a blur using the supersonic spin attack at high speed, defy gravity around loop-the-loops and defeat Dr. Eggman as the fastest hedgehog of all time. Gotta Go Fast!

Tesla is also adding Sudoku to its arcade:

The automaker is also adding multiplayer to ‘The Battle of Polytopia’:

The Battle of Polytopia – Multiplayer Support

You can now play The Battle of Polytopia with friends using the new multiplayer mode.

For the more practical changes in the holiday update, Tesla is also making some cold weather improvements:

You can now precondition the cabin from the Tesla app when your battery is at a lower state of charge. Simply turn on the climate from your Tesla app and override the previous setting by tapping “Yes” on the confirmation pop-up. window.

First row seat heaters can now automatically regulate seat temperature based on the cabin environment and the climate control set temperature. To access seat heating controls, tap the temperature settings to bring up the HVAC panel.

Note: HVAC system must be in Auto to use automatic seat heating.

Over the last year, Tesla has been improving on its dashcam video viewer and there’s a new update in 2021.44.25.

Simplify your navigation app and hide map details by tapping the pin button on the map.

The update is starting to roll out to the fleet, but it can take a few days to propagate to all owners.