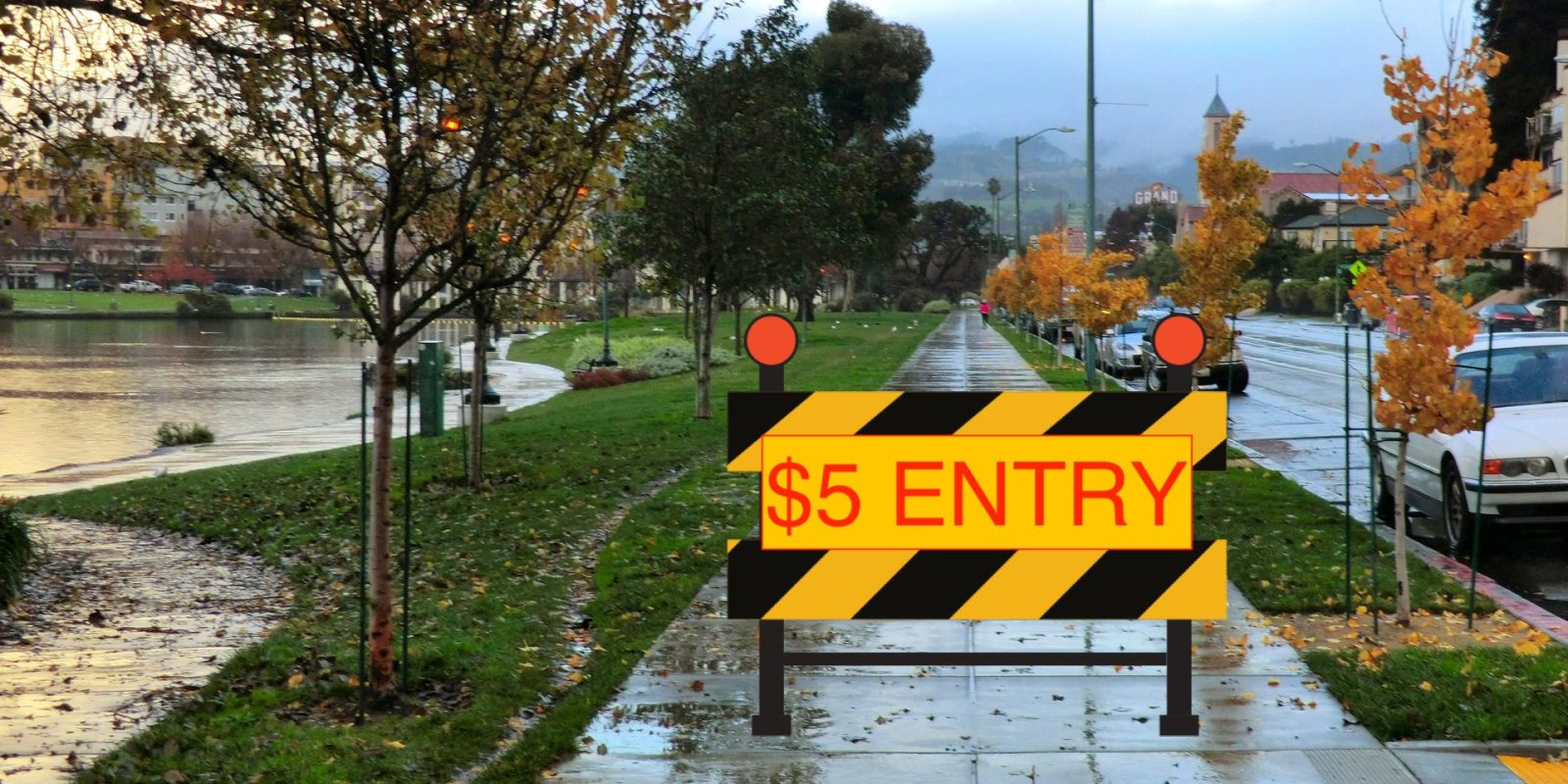 The province of Saskatchewan in Canada has joined a growing number of regions around the world in levying punitive taxes against electric cars while letting gas cars continue to get away with murder. But a local group has come up with a creative way to show just how dumb their EV tax is: by demanding a tax on people who use sidewalks.

Saskatchewan’s new EV tax went into place on October 1, and is the first EV tax implemented in Canada. The tax charges $150 per year for every EV registered in the province. Saskatchewan does not have any province-specific incentives for EVs. We’ve covered before how these taxes are unreasonable, unfair, and pushed by the fossil fuel industry, that there are better ways to implement them (and worse ways), and how a combination of weight + mileage fees combined with a price on carbon would be a much more fair and ideal solution.

The proponents of the new sidewalk tax – a small group of taxpayers who call themselves “Saskatchewanians for Sidewalk Sustenance” (SSS) – point out that sidewalk users “put less exhaust in the air, contribute to wellness, and lower the health care costs we’ll pay today and tomorrow, all while fighting climate change” when compared to driving gasoline-powered vehicles. In these ways, sidewalks represent a public good, and people who choose to use sidewalks instead of roads are doing something to benefit their communities. The same is true of EVs when compared to gas cars (but not compared to sidewalks).

So, if Saskatchewan wants to put a punitive disincentive on something that absolutely should be incentivized, SSS claims that they might as well do the same for sidewalks, too.

Their group’s press release really hammers home the ridiculousness of EV taxes by laying on some thick sarcasm:

“Every day, thousands of people walk all over our sidewalks, push heavy strollers and shopping carts, even use motorized vehicles and bicycles,” says Lou Acera, president of SSS. “But are they contributing to the extra upkeep? This makes sure they do.”

The group points to what it believes is an alarming increase in sidewalk usage by environment- conscious citizens. “We’re observing a ton more people than ever before using the sidewalks,” states Acera. “They tell us that they’re doing it to remove polluting cars off the road and promote an overall healthier population, so that we all pay less taxes in the long run, but they’re sneaky. They’re walking all over us, so we’re hitting back.”

“The group will be running outdoor (attached) and radio ads and is planning a press conference to reveal “the concrete proof,” as well as a list of SSS-approved footwear from popular brands scientifically assessed by the group to have less impact on sidewalks than most shoes. “It’s a little thing we all can do,” says Acera, who personally wears Crocs when he has no choice but to sidewalk. “The foam outsole is the gentlest we’ve tested by far.”

The group’s real goals are not to implement a sidewalk tax, but to use this to show the absurdity of EV taxes. In terms of actual policy proposals, the organization suggests that Saskatchewan pause the implementation of its EV tax until greater levels of EV penetration are reached. As is, the tax will disincentivize a fledgling industry while not actually raising any significant amount of money (and perhaps even costing the province money).

Currently, there are about 600 electric vehicles registered in all of Saskatchewan, meaning the tax will bring in a whopping $90,000 per year. Based on average costs of Saskatchewan highway repair, this is enough money to repair approximately 140 meters of highway (based on 2015 numbers), out of a total of more than 26 million meters of highway in the province – that’s .0005% of Saskatchewan’s highways. But given that this is a new program, it might not even be enough to pay for administrative costs of the new tax.

In an opinion piece about Saskatchewan’s EV tax, Joel Bruneau, a professor of economics at the University of Saskatchewan, explains how the tax, implemented now, will make the province poorer. Not only will administrative costs possibly take up most of the new tax’s revenue, but it also will send a signal to EV-related businesses that Saskatchewan is unfriendly to electric cars and thus detract from possible investment in the region (e.g., in the province’s large mining sector that could provide EV battery components).

Bruneau also points out that it’s an economically inefficient policy. Utilities often charge “access” and “usage” fees, like a flat monthly connection fee and then a scaling fee based on how much resource you use. But Saskatchewan is now charging an access fee for EVs and exempting all non-electric vehicles from said access fee.

Meanwhile, gas cars pay a rough analogue of a usage fee in the form of gas tax, and electric cars pay a rough analogue in the form of taxes on electricity. Bruneau argues that, ideally, all cars should be charged an access fee based on weight and a usage fee based on mileage (and since virtually all economists support a carbon price, we suspect that he would support one as well).

SSS suggests that Saskatchewan should at least wait until there are more electric cars on the roads before implementing this tax. The adoption threshold they’ve chosen is based on when California put their EV tax into place – when EV adoption reached 1.3% of vehicles.

But California’s fee was still implemented too early, and still wasn’t going to help fill any holes in the state’s transportation budget by being implemented that early. A better model would be New South Wales in Australia, which adopted an EV incentive package including tax breaks and big spending on public charging infrastructure, along with a future EV tax which will go into place either in 2027 or when 30% of new car sales are electric, whichever comes sooner.

Or an even better model would be to implement weight, mileage, and carbon fees, and get away from the imprecise and inefficient method of underfunding roads through too-low gas taxes that politicians never have the courage to hike when needed and punitive taxes on a minority that’s just trying to do the right thing for their community and the climate.

But SSS says that, in a province with a powerful oil and gas industry, this 1.3% target is the best they think they’ll be able to get. So it’s what they’re going for.

To show that they’re serious about this effort and not just trying to save themselves $150, SSS has even offered to pay your EV tax for you – or to donate it to the Saskatchewan Environmental Society (SES). Saskatchewan EV drivers can provide proof on their “get your tax back” link, and can ask for SSS to send them a $150 check or donate that check to SES.

The organization also suggests that supporters can share or retweet their campaigns on social media (they have a Twitter and Facebook), send a letter to Saskatchewan representatives (which you can do at the bottom of their page), or help to crowdfund their campaign.