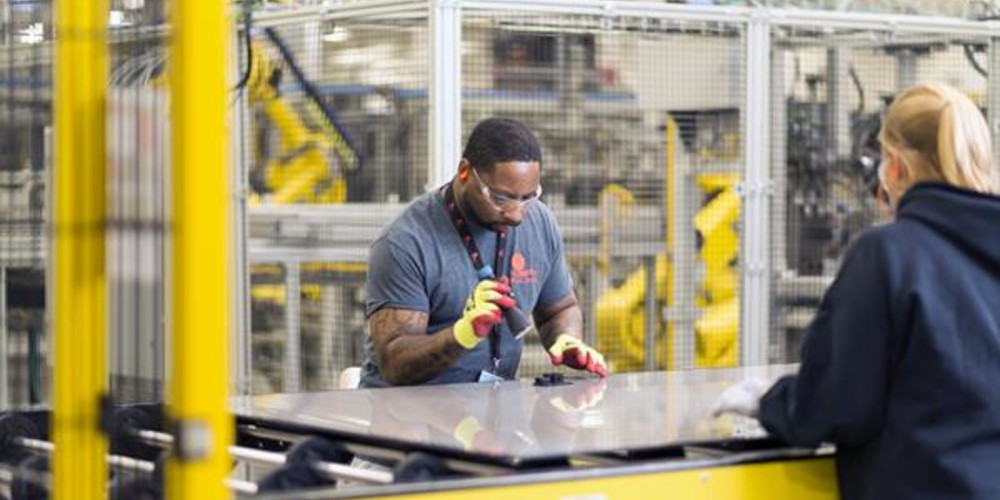 First Solar, the largest US-owned solar panel manufacturer, today announced that it’s opening a third manufacturing plant in Ohio in the first half of 2023.

The $680 million factory in Lake Township, near Toledo, is expected to initially produce enough solar panels to produce 3.3 gigawatts direct current of power annually. That represents “an implied capital expenditure of approximately $0.20 per watt,” according to First Solar.

Once the new facility is fully operational, the three factories together will manufacture panels that could generate a total of 6 gigawatts of direct current. First Solar states that it believes that will make it “the largest fully vertically integrated solar manufacturing complex outside of China.”

First Solar expects to produce an average of one module around every 2.75 seconds across its three factories.

The company currently employs 1,600 people at its existing two Ohio factories and plans to hire 500 people for the new factory.

Crystalline-silicon technology, which mostly comes from China, is not used in First Solar’s thin-film photovoltaic panels.

We have said that we stand ready to support President Biden’s goal to transition America to a clean, energy-secure future, and our decision to more than double our US manufacturing capacity with this new facility is First Solar making good on that commitment.

This facility will represent a significant leap forward in photovoltaics manufacturing, a true factory of the future. It will leverage our advantaged position at the intersection of efficiency, energy yield, optimized form factor, and cost competitiveness, while leading our manufacturing fleet in delivering the highest efficiency and wattage, and the lowest cost per watt.

The Biden administration has called for 100% clean electricity by 2035. US Energy Secretary Jennifer M. Granholm said of First Solar:

As a partner to our solar program since 2003 and a DOE loan guarantee recipient in 2012, this company is a great example of how investment and innovation can build the clean energy future right here at home — shoring up American competitiveness and bringing good-paying jobs to all pockets of the country.

But even with the three Ohio factories, First Solar would still import 40% of its panels from its factories in Vietnam and Malaysia, according to the Wall Street Journal, which continues:

Mr. Widmar said the company wants to continue to expand US production, which helps it save on freight costs and strengthen the company’s standing as an alternative to Chinese imports.

The company is banking on continued US support through tax breaks and possibly renewing tariffs on imported Chinese panels, as well as growing domestic demand.