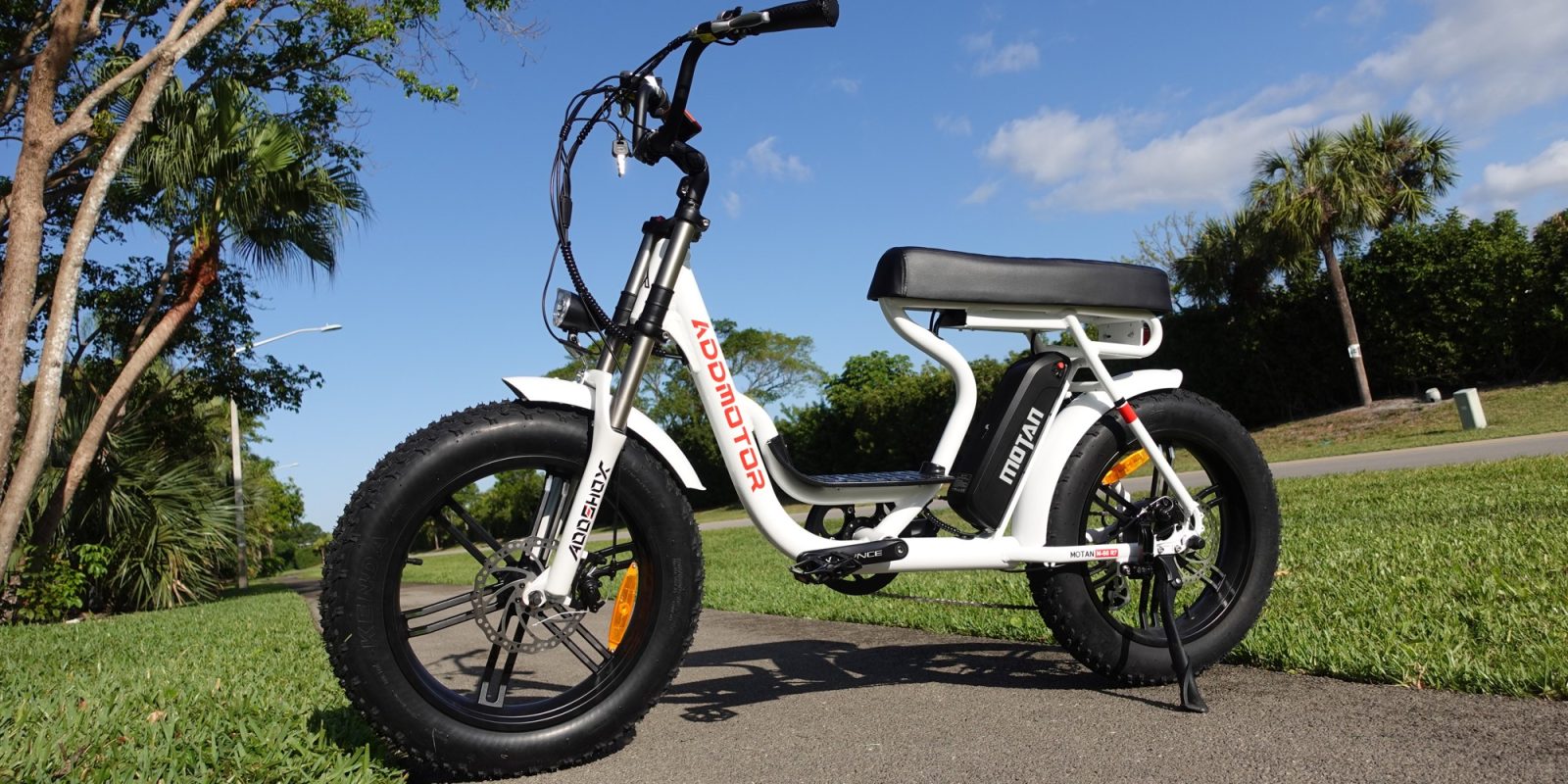 Electric bicycles in the rugged moped style are all over the place these days, and for good reason. Unlike fitness e-bikes that are often used for a combination of exercise and leisure riding, electric mopeds are built mostly for good old fashioned getting around. And the Addmotor M-66 R7 moped fully embodies that design ethos. It’s a transportation e-bike that will have you zipping around your city faster than a car and cheaper than a public transport season ticket.

Check out the video below to see me testing the Addmotor M-66 R7, then don’t forget to keep reading for the rest of my full review!

An electric moped for the city

While some electric moped-style bikes are more like dual-sports designs for both on- and off-road adventures, the Addmotor M-66 feels like a dedicated urban warrior.

Its 80mm travel dual-crown front fork means it handles the occasional trail better than a totally rigid bike, but this isn’t a serious all-terrain vehicle. Instead, it’s an awesome street bike.

Outfitted with lights and full metal fenders (not those dinky plastic fenders that shake around like a rubber pencil), this e-bike comes right out of the box with everything you’d need to handle daily commuter tasks.

There’s even a cool rear rack that can be bolted on for more utility work, though that’s a $69 upgrade. Without upgrading anything, though, it’s already set to carry you and a passenger anywhere you’d need to go in a city. And that long bench seat combined with solidly made passenger pegs will make your riding buddy feel secure, too.

The bike is technically limited to just 32 km/h (20 mph) right out of the box, but I played around in the settings and found that you can remove the speed limit, opening up a little more room on the top end to get you to 36 km/h (23-ish mph) with a full charge.

The fairly large battery is also a welcome addition, with 674 Wh of capacity. The claimed 55 mile range is a joke – you’ll never see that unless you actually keep it in pedal assist level 1 all the time, but half of that range is definitely doable.

Here’s the kicker – this bike isn’t a great pedaler. It’s fine, it works, but it’s not optimized for pedaling since you can’t adjust the seat. I just scoot forward or backward on the bench seat to find my most comfortable spot, but there’s only so much you can do there. You still end up with that high-knee feeling when you pedal, which isn’t great for covering long distances.

The fact that they even give you a footrest should be an indication that this isn’t really meant to be the most normal-to-pedal bike out there.

I tried the foot rest, but it feels a bit foreign to me. I’m not used to my feet being that high up on a bike, and I feel much more natural just leaving them on the pedals.

If you do choose to pedal, you’ll of course improve your range. But with nearly 700 Wh of battery capacity, even throttle-only riding will still net you decent range in the 40 km (25-mile) ballpark.

Mostly hits, but a few misses

For the most part, Addmotor did a great job with the M-66 R7 electric moped.

It’s quick, fun, and comfortable to ride, thanks to that plush seat.

The handling is pretty good, and the front suspension fork makes the ride even better.

I also appreciate the spokeless wheels, as you won’t ever have to worry about spoke tension or bending a spoke if you smack it on something. The mag wheels are more rugged and they look pretty cool, too.

On the other hand, there are some areas that I’d like to see improved. The tail light is nice to have, but it isn’t connected to the main battery like the headlight. That means you have to turn it on at the tail light instead of the display, and you’ll eventually have to swap the batteries out when they die.

I also wish they had sprung for hydraulic disc brakes. I should emphasize that the brakes are plenty strong, and there’s nothing inherently wrong with mechanical brakes. I even like that they used those mechanical brake levers with the built-in bell – it’s a useful tool and saves space on the bars for other accessories. But for $1,999, including hydraulic disc brakes would have been appreciated.

And of course there’s the somewhat-awkward-to-pedal situation, but that’s just how these electric mopeds go. I’ve yet to see an electric moped that was great for pedaling; it just isn’t their forte.

All told, I’d say the Addmotor Motan M-66 R7 still did a great job at fulfilling its role of a laid-back city moped.

It’s tons of fun to ride, has plenty of power, and gets you where you need to go in style. Works for me!