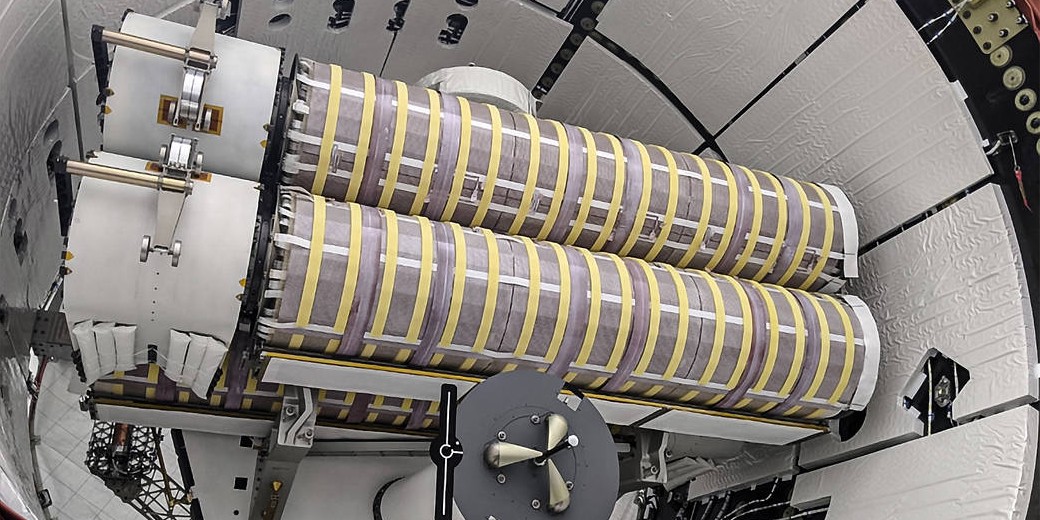 An uncrewed SpaceX Dragon CRS-22 cargo ship launched on a Falcon 9 rocket from NASA’s Kennedy Space Center on June 3 and arrived at the International Space Station (ISS) two days later. It was carrying, among many other things, two new solar arrays that will power the ISS.

The Dragon delivered two out of six iROSA on this trip. They were rolled up and stored in a compact cylinder (pictured above). The other four solar arrays will arrive at the International Space Station by 2023.

Redwire is responsible for the design, analysis, manufacture, test, and delivery of iROSA. Each iROSA uses upgraded solar cells from Boeing’s Spectrolab and provides 28 kilowatts of power. The six arrays will together produce more than 120 kilowatts that will boost the station’s power generation by 20-30%. ROSA technology was successfully demonstrated on the ISS in June 2017. Here’s a good look at Redwire’s ISS solar array technology in this video:

Redwire explains how it works:

ROSA’s patented design uses composite booms to serve as both the primary structural elements and the deployment actuator together with a modular photovoltaic blanket assembly that can be configured into various solar array architectures. Instead of using complex mechanisms and motors for deployment, ROSA uses stored energy from carbon fiber booms that are cut and rolled back against their natural shape for storage. At a designated point during the mission, the stored strain energy of the booms enforces the unrolling deployment actuation. When fully deployed, the now rigid booms provide the solar arrays’ structural stiffness and strength.

Looking forward to all the science and other goodies that it brought up along with our EVA solar arrays. It’s going to be a great few weeks as we get into Dragon and get things out.

Astronauts will install the two iROSA on spacewalks on June 16 and 20.