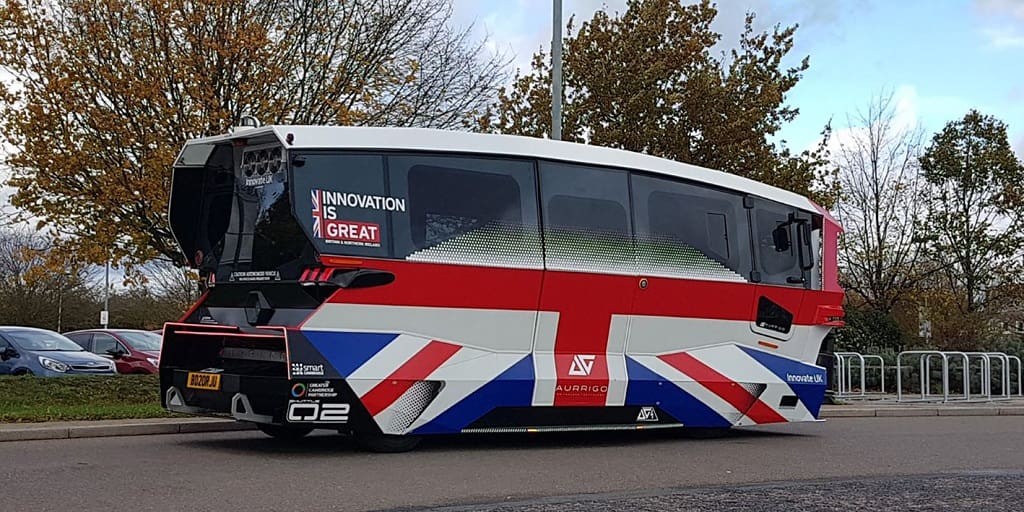 The first driverless electric shuttle buses hit the roads in the city of Cambridge in the UK yesterday as part of ground-breaking trials.

The Aurrigo Auto-Shuttle will operate on a two-mile route between Madingley park and ride, the West Cambridge campus, and the Institute of Astronomy. The journey takes around 20 minutes. Passengers recruited for the project will be able to use an Aurrigo app that will allow them to be picked up at a number of locations.

A trial of three of the vehicles will start in June. The shuttle buses are driverless, but safety operators will be in each of the vehicles. They can travel up to 20 mph (32 km/h).

Coventry-based engineering firm Aurrigo built the “Auto-Shuttles.” Aurrigo’s 10-seat Auto-Shuttle follows its Auto-Pod four-seat vehicles, which the company claims is “the world’s first conventional electric and autonomous vehicle.” Here are the specs of the Auto-Shuttle:

The project is a Greater Cambridge Partnership, Smart Cambridge, and Aurrigo venture. It’s backed by Innovate UK and the Centre for Connected and Autonomous Vehicles. BusinessGreen explains:

The Greater Cambridge Partnership works to boost growth by investing in local infrastructure, housing, and skills – it is currently delivering the city’s £500m government deal. New technology such as the autonomous shuttle may form a crucial component of the future of GCP’s public transport networks, the organisation said.

We’ve completed successful trials in city centers but this is the first time these custom-made vehicles will be sharing the route with other traffic while carrying passengers.

[It’s a] major milestone in the journey toward making autonomous vehicles a reality on our roads.

The shuttles are fitted with sensors, cameras, and laser scanners that build a map of how the vehicle moves through its environment. And good thing, because Cambridge has heavy car and truck traffic, narrow roads, and a lot of cyclists and pedestrians. I mean a lot.

I took my UK driving test in Cambridge, and it was challenging, as there are constant hazards to keep an eye out for. The rapidly growing, busy city is going to put Aurrigo’s technology to the test. There are tourists and students everywhere that suddenly veer in front of your vehicle or step out into the road without looking.

The Daily Express reports that Cambridge residents are repeating the mantra, “accident waiting to happen,” on Facebook. I think that’s a little cynical. It’s not like you can’t spot the shuttle bus – it’s a giant Union Jack – and maybe, just maybe, the technology will work as it’s supposed to?

It’s great to see these electric buses launch in Cambridge, and hopefully, the city will be able to use more of them once the trial period passes. Being that each shuttle only carries 10 passengers, they’re going to need a lot of them to truly make a difference.

The shuttles will make the air cleaner for residents and visitors and reduce the pollution damage to the stunning historic architecture in the city center.