EGEB: This ultrawhite paint could cancel the need for air conditioning 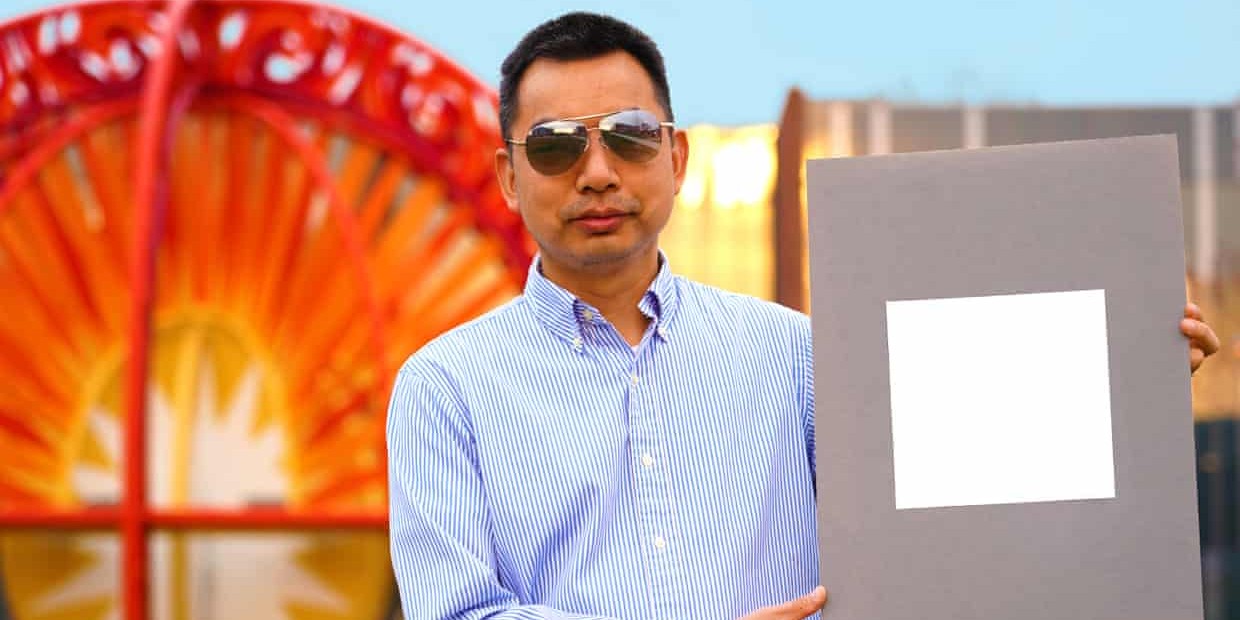 Researchers at Purdue University have produced ultrawhite paint to cool buildings, and thus reduce the need for air conditioning. That in turn reduces emissions. The research was just published in the journal ACS Applied Materials & Interfaces.

Reflective white paints currently on the market only reflect 80-90% of sunlight and absorb ultraviolet light, so they can’t cool surfaces adequately. But the researchers’ paint can successfully cool buildings, as it reflects 98% of sunlight. (Think about how much money we’d save, too.) The study’s abstract states:

During field tests, the BaSO4 [barium sulfate] film stays more than 4.5 °C below ambient temperature or achieves an average cooling power of 117 W/m2.

The Guardian explains how it works:

First, barium sulphate was used as the pigment which, unlike conventional titanium dioxide pigment, does not absorb UV light. Second, a high concentration of pigment was used – 60%.

Third, the pigment particles were of varied size. The amount of light scattered by a particle depends on its size, so using a range scatters more of the light spectrum from the sun.

Professor Xiulin Ruan, a mechanical engineering professor at Purdue University, pictured above with a sample of the paint, said [via the Guardian]:

Our paint can help fight against global warming by helping to cool the Earth – that’s the cool point. Producing the whitest white means the paint can reflect the maximum amount of sunlight back to space.

The researchers say the cost of the paint would be similar in price to current white paints, as barium sulphate is cheaper than titanium dioxide. Purdue University and the research team have filed for a patent, and they are working with a large corporation to bring the paint to market within one to two years.

According to Reve, the first phase of the wind farm was completed in 2019 with a capacity of 39.95 megawatts (MW). The second phase has an additional capacity of 64 MW, and the third phase of 48 MW.

After US special presidential envoy for climate John Kerry and China special envoy for climate change Xie Zhenhua met a number of times in Shanghai late last week, the two countries released a joint statement saying they would collaborate to fight climate change. This confirms that the two countries will cooperate, whereas previously it wasn’t certain.

President Xi Jinping has not yet confirmed whether he’ll attend President Joe Biden’s climate summit this week, where the US is expected to unveil its plan for cutting emissions over the next 10 years. Xi may announce tighter Chinese targets at the Boao Forum, for business and government leaders, which will also be held this week.