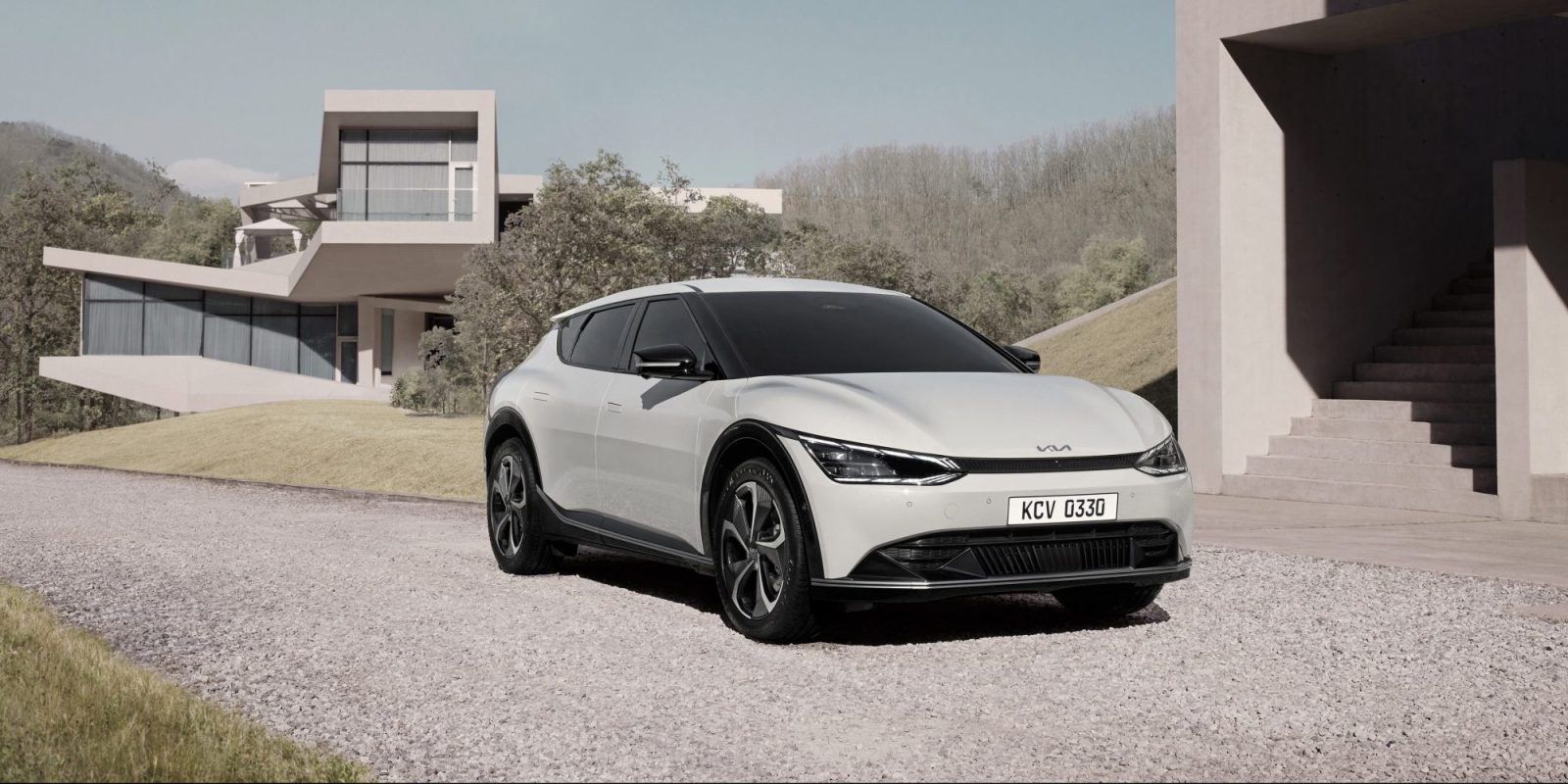 Kia has shown the first images of their all-electric “crossover-inspired” EV6, based on the Hyundai E-GMP modular EV platform, which it shares with the recently announced Ioniq 5. While we have no specs yet, we expect to hear more about them at an event later this month.

The design is certainly striking, with similar proportions to the Ioniq 5. Since both are built on the same new dedicated EV platform, they’re expected to have similar specs. Kia is expected to announce specs on the car in an event later this month, and if they’re anything like the Ioniq 5’s, then they could be quite impressive.

Kia and Hyundai have shared similar EVs before, with the Kona and Niro EVs sharing a powertrain. But those two vehicles look rather similar, while the Ioniq 5 and EV6 seem to differ more significantly – particularly on the interior as we will see below.

Compared to the Ioniq 5, the EV6 has a much bolder character to it, with a tapered floating roofline and a more aggressive looking front end, contrasted with the more friendly front end of the Ioniq 5. But the EV6’s lines are also smoother and more rounded than the Ioniq 5’s.

Have a look at the photos below:

Unlike the Ioniq 5, the Kia EV6 does have a grille at the bottom of the front end. EVs need less air intake than gas cars, because batteries and motors don’t need air to feed a combustion engine, and put out less heat as well. Some EVs have fake grilles to make them look similar to what consumers expect the front end of a car to look like, but more and more have been starting to forgo it. It looks like you’ll have a choice between fake grille or not when choosing between the Ioniq 5 and EV6.

Kia also released two images of the interior. In them, we can see a relatively clean design (though nothing compared to the famously sparse Model 3). There’s a large wide screen, split into two parts – one with driver instrumentation visible through the steering wheel, and a center screen with the infotainment system.

The interior is very different from the Ioniq 5, which is more open and configurable and has a much more rectangular dash. The EV6 forgoes a gear selection lever on either the dash or the console, instead opting for a knob for gear selection on the center console, which also seems to house the power button for the car. The steering wheel has multiple switches on it for easy access to controls.

Unfortunately we can’t really learn anything from the dash display, which is just a render – the numbers 124 and 324 show up on the dash, which seem to be in kilometer units. These could be current range or speed, but neither are particularly interesting, as it’s not surprising that the car would be capable of moving 124km/h (77mph) or capable of charging to 324km of range (201 miles). The Ioniq 5’s Long Range battery is expected to have a WLTP rated range of around 470km, and we expect something similar out of the EV6.

Kia accompanied the images with a press release explaining their design philosophy. The document describes the design philosophy as “Opposites United,” with five key design pillars: Bold for Nature, Joy for Reason, Power to Progress, Technology for Life, and Tension for Serenity.

Along with the press release, Kia also released a brand video explaining their design philosophy. But there’s nothing specific in it regarding the EV6, just general discussion of their design language:

What do you think of the EV6’s interior and exterior design? Is there anything you want to see out of the car when we hear more about specs in a few weeks? Let us know in the comments below.