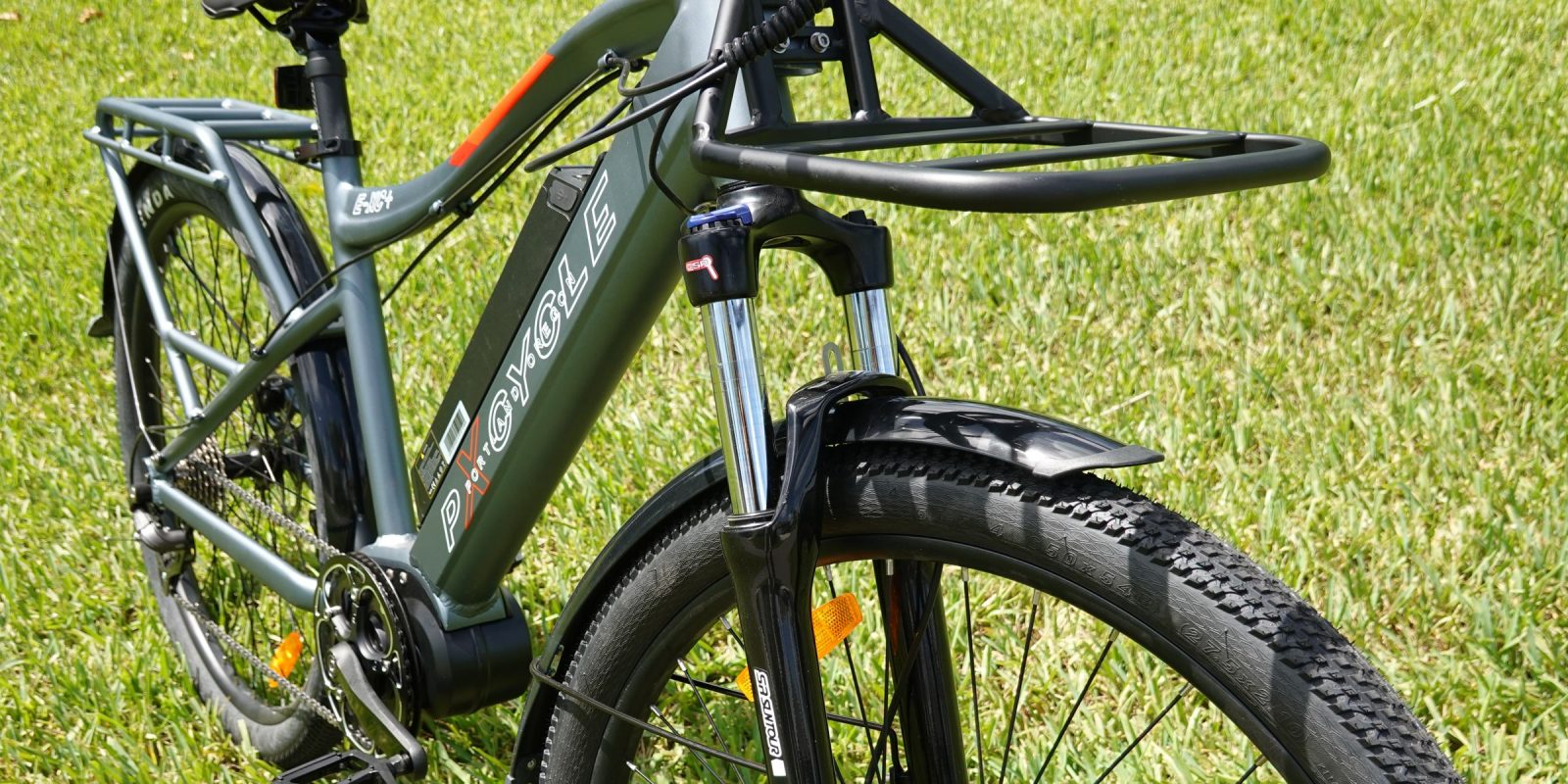 Portland-based pXcycle has just launched the latest version of its urban electric mountain bike. They call the new pXcycle EX-C+ the “world’s most versatile e-bike,” and the bike is available for 50% off during the current launch promotion and ships worldwide.

The pXCycle is available in a few different models with varying specs and accessory loadouts.

They all include an urban mountain bike frame with front suspension, hydraulic disc brakes, and a mid-drive motor with a torque sensor for engaging pedal assist.

The major differences between the models are the speed and power specs.

The entry-level pXcycle EX-C 250 has the lowest power limit pre-programmed into the motor, limiting it to 250W of power. The bike can reach a top speed of 20 mph in the US or 25 km/h in Europe. There’s no throttle, which keeps the bike classified as a Class 1 e-bike in the US and a street-legal e-bike in Europe.

The bike sports a small-ish 36V 10Ah battery, though the range is still listed as up to 60 miles (96 km) thanks to the efficient pedal assist operation of this model. On higher pedal assist settings though, expect to see lower range figures.

For those seeking more power and speed, the pXcycle EX-C+ 400 is priced at $1,595 and swaps in a 48V 10Ah battery that boosts the top speed up to 28 mph (45 km/h). This model peaks at 600W of power and also includes the built-in front and rear racks as well as the integrated LED lighting.

Anyone looking for the highest power will want to check out the pXcycle EX-C+ 600, which peaks at 850W of power and sports a 48V 14Ah battery. The bike also includes the same integrated LED lighting and front/rear racks as the previous “plus” models.

All of the bikes can accept a throttle add-on for those that don’t want to be stuck pedaling 100% of the time. The bikes also sport backlit displays, 9-speed Shimano drivetrains, alloy pedals and all-terrain tires.

In addition to the optional throttle, other upgrades include a color display, a “big boy” high-capacity battery in either 48V 21Ah (1,008 Wh) or 36V 25Ah (900 Wh) variants and a fast charger that cuts charging time in half.

The e-bikes are currently available for pre-order with shipping estimated to begin in September.

I had the pleasure of testing out an early prototype of the bike that was in its nearly final form, except that it still had a previous version of the motor.

The bike was an awesome ride for me as a do-everything urban assault e-bike, and I’m told that the new motor is even better than the previous one. You can see my testing video below.

With a powerful mid-drive motor and higher-end components than you’d expect to find at this price, the company is taking aim at some other popular urban e-bikes on the market.

In a table posted on the sales page, pXcycle compares the EX-C+ to e-bikes including the Mate X, RadCity, and Juiced CrossCurrent X.

I don’t know how well the range figures would hold up in a real-world heads up test as they all have fairly similar battery capacities, but the other figures such as weight, torque, and that mid-drive motor all speak for themselves.

Following a trend that we’re seeing a lot of lately, pXcycle has taken to Indiegogo to launch the latest version of the EX-C series.

Many electric bicycle companies follow this strategy as a way to reach a larger audience. In general, we don’t often cover crowdfunding campaigns here on Electrek unless they can meet one of two requirements: Either we have been able to test the product first to verify it works well, or the company/founder is a known entity with a proven track record in the industry. In this case, the pXcycle actually fulfills both.

So while Indiegogo and Kickstarter campaigns may send some people running for the hills, in this case we feel pretty good about pXcycle since they’re an existing bike company and have delivered plenty of bikes to customers over the last few years.