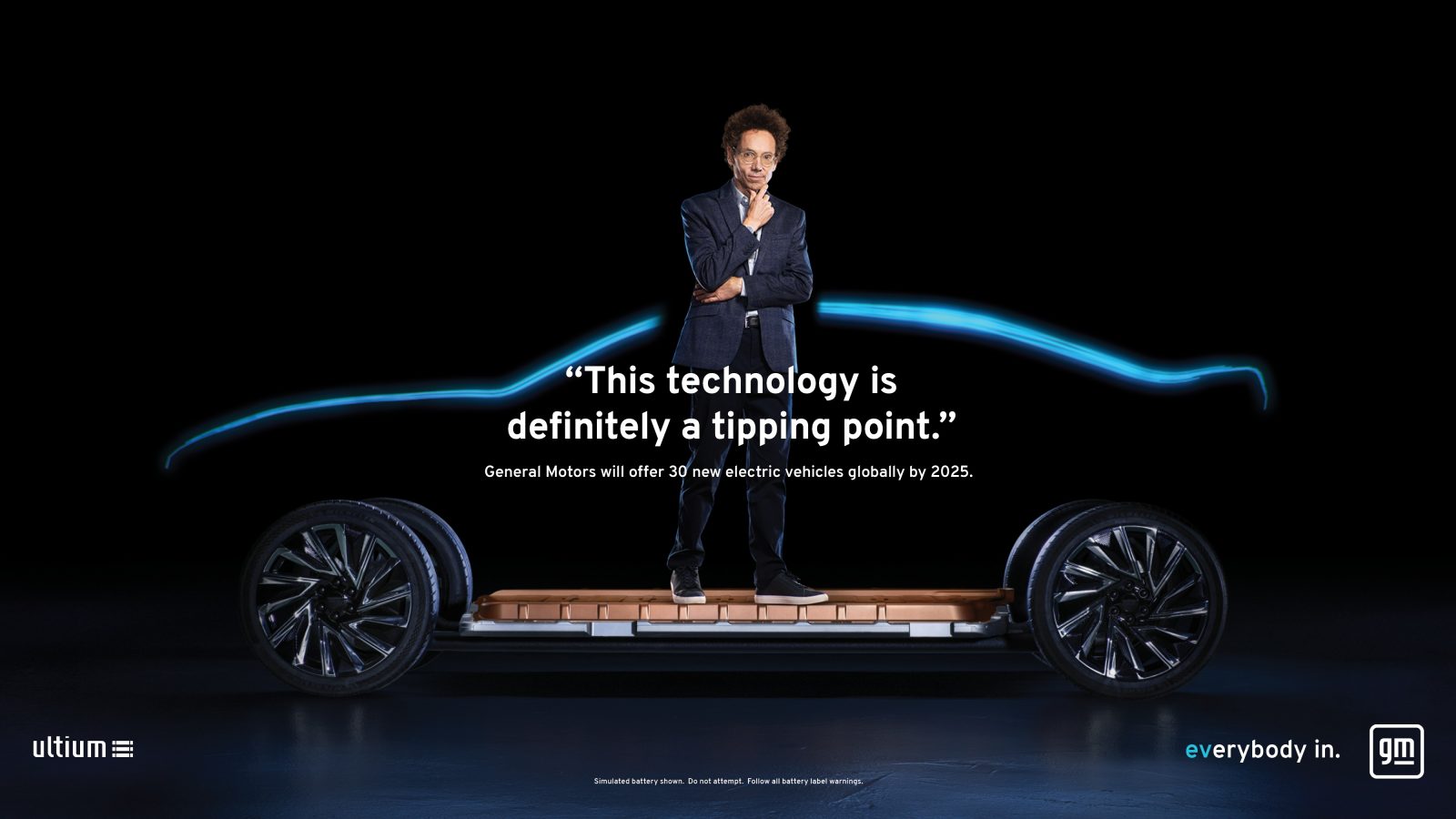 GM is starting a huge campaign this week in the US and will be rolling out in phases globally to highlight the automaker’s move to electrification. The campaign was done by McCann as well as the logo and type, which was developed in-house. It’s a big change and will envelop all of its products, including its legacy ICE vehicles.

GM’s ‘Everyone In’ EV marketing campaign

GM says that its new “Everybody In” campaign sets “an optimistic and inclusive tone for the company’s EV future and focuses on three themes”:

There are moments in history when everything changes. Inflection points. We believe such a point is upon us for the mass adoption of electric vehicles. Unlike ever before, we have the solutions, capability, technology, and scale to put everyone in an EV. Our new brand identity and campaign are designed to reflect this.

GM has brought in Malcolm Gladwell, author of Tipping Point, to highlight the sea change that lies ahead in the industry. From the book:

The tipping point is that magic moment when an idea, trend, or social behavior crosses a threshold, tips, and spreads like wildfire. Just as a single sick person can start an epidemic of the flu, so too can a small but precisely targeted push cause a fashion trend, the popularity of a new product, or a drop in the crime rate. This widely acclaimed bestseller, in which Malcolm Gladwell explores and brilliantly illuminates the tipping point phenomenon, is already changing the way people throughout the world think about selling products and disseminating ideas.

Gladwell will have a conversation with GM president Mark Reuss at CES next week, which should be interesting. The prolific writer was last seen endorsing EV-less Lexus all the way back in April so his affinity with GM EVs is recent.

Gladwell, along with Cody Rigsby of Peloton fame and Influencers like professional surfer and shark attack survivor Bethany Hamilton and gamer Erin A. Simon will also appear in GM advertising and promo videos.

Here’s a look at the history of GM logos and to say that there have been 5 is a bit of a stretch. There are realistically 3 with 3 iterations of the previous one which ran from 1964 to today. So to say this is a big deal would be an understatement. This is a change to the GM logo that everyone knows.

Click below for different uses of the new logo, both solid and a gradient that made the designer of Electrek’s logo blush.

GM plans to spend big here, so expect to see these campaigns all over the place.

A big part of me is like, “Just show me the cars at the dealerships. I don’t need all of this marketing!” But I have to remember that I cover EVs, and am not GM’s typical buyer, though I leased a Bolt for three years that I loved.

The move here is bold for GM for sure. To say they are betting the company on the Zero campaign of electrification, autonomy, and safety is almost an understatement. They’re turning this ocean-going tanker toward the future (a little late, in my opinion) using traditional marketing tools.

But marketing is often a lot of cruft, smoke and mirrors, and shenanigans. I want to see batteries, motos, spec, and most importantly vehicles… in person. GM will have to stave off its reputation of having the first EV (EV1) and the first mass-market, long-range EV (the Bolt) and then squandering its lead to Tesla.

That said, I like the direction that GM is going here. They boiled their future down to three priorities in their Zero Campaign that I think fit their brand perfectly. They want to bring EVs to more people including downmarket, where Tesla and other EVs haven’t really gone. If I’m honest, this is exactly what I think GM needs to be doing to stay relevant in the future. They do get it.

Now it remains to be seen if they can follow through, or if they leave these assets stranded like the EV1.