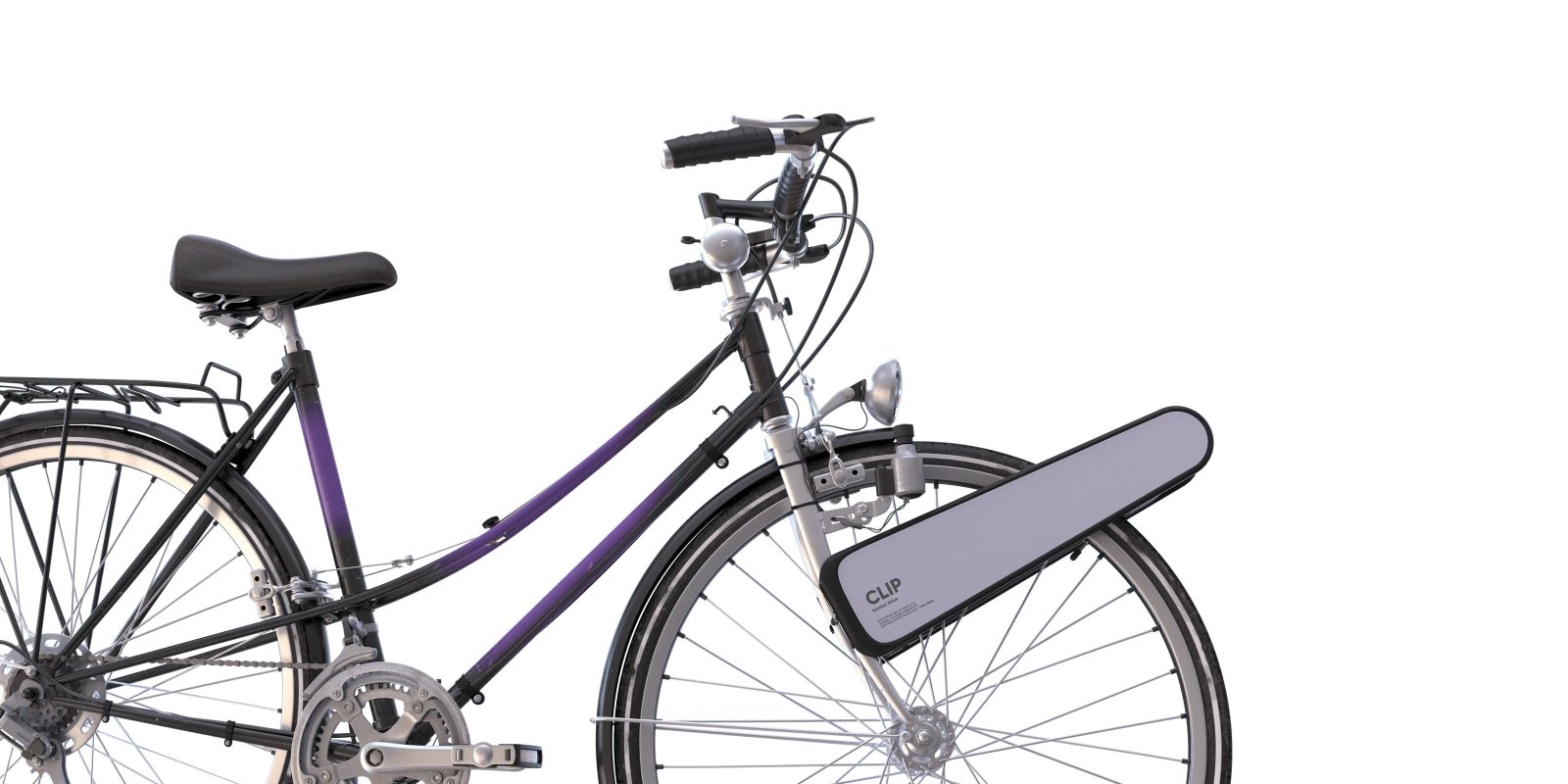 The Clip kit uses a friction drive on the front tire of a typical pedal bike to provide powered assist to the rider.

The entire unit mounts onto the front fork and straddles the wheel.

A small roller presses against the tire and spins the wheel, propelling the bike.

It’s not a new technology – a friend of mine in college had an EV Warrior e-bike with a friction drive from way back in 1995. But it certainly is simple and effective, resulting in minimal parts and complexity.

It’s a solution that we’ve seen applied with varying degrees of elegance before.

This time Clip seems to have taken the old idea and updated it into a sleek albeit somewhat comical-looking design.

Like an e-bike knight jousting down the road, the Clip kit’s elongated frame and shell jut out past the front of the bike. However, the entire kit is also removable so that riders can easily stow it in a bag or carry the device inside for charging.

The internal battery is rated at 144 Wh, which is rather small compared to the 500-700 Wh e-bike batteries commonly seen today.

But with the lack of a throttle, the manufacturer claims that its pedal assist functionality still offers decent range of 10-15 miles (16-25 km), or enough for around a 45-minute commute. And with a claimed recharge time of just 40 minutes, even a quick stop at the coffee shop should replenish a decent amount of your battery charge.

The Clip kit allows the e-bike to fit into Class 1 designation in the US, meaning it cuts assist after reaching 15 mph (25 km/h). It also features a 450W power rating, so it should feel a bit more lively than typical European-legal e-bikes with 250W power limits.

Clip is pre-selling its kits for $399 and has already sold out the first round, meaning anyone else getting in line will have to wait for delivery this summer.

I have a love/hate relationship with friction drive kits. They’ll always hold an interesting place in my heart as one of the earliest e-bike drive technologies.

But their often loud motors/rollers and their propensity for chewing up tires doesn’t always leave a good taste in my mouth.

That being said, I’ve got a Rubbee friction drive kit that I saw at Eurobike on my desk right now that I’m preparing to toss on an e-bike, so I’m always willing to give the old tech a new try, especially when it’s been repackaged in a way that incorporates novel features or designs.

Maybe old is new again. My wife insists that 90s jeans are back, so perhaps 90s e-bike drives are coming with them.