If you’ve never heard of a friction drive electric bike system, there’s a good reason. Past systems have been described as “gutless,” “incomplete,” and “useless in the rain.” With this condemning backdrop, a small company from Quebec has shattered expectations with the feature-rich 300c from Alizeti.

Up to now, I’ve tried maybe five different friction drive electric bikes. They all have their shortcomings, but they seem to have a few drawbacks in common: noise, lack of power, big promises, and sketchy install. The Alizeti has changed my perception on the concept in almost every way. I never thought I’d say it, but a friction drive can be a useful option for some folks. Maybe they have friction fondness and simply like the tech. Maybe their peculiar or custom bike can’t accommodate a front hub drive, or a rear hub drive, or a bottom-bracket mid-drive, or a frame mounted mid-drive, or an external mounted drive. Anyway, this friction drive can work. 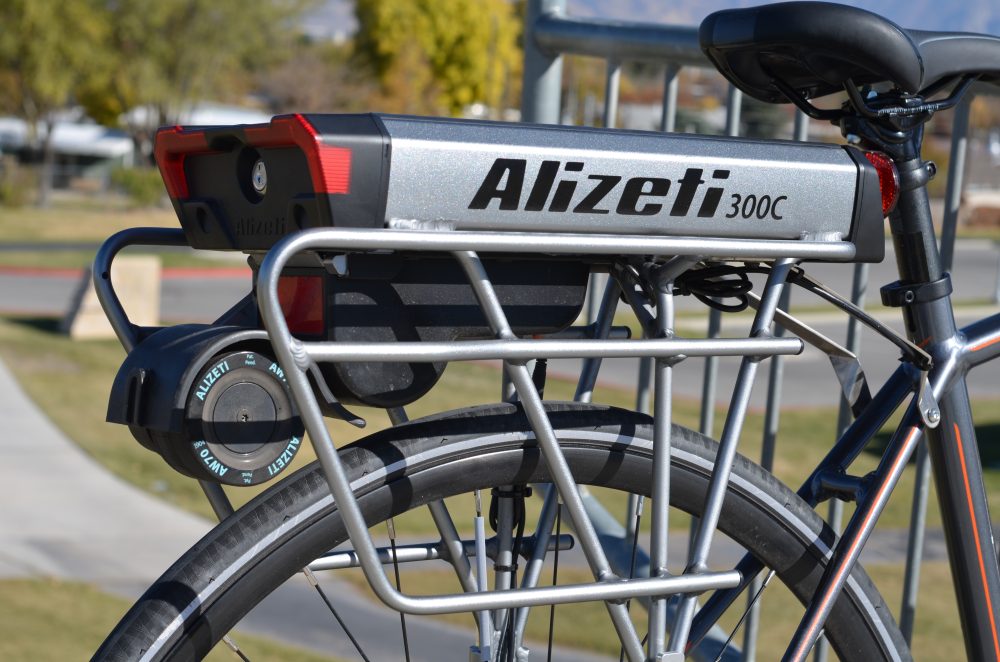 For a moment, let’s put aside the friction drive part of the system. The Alizeti 300c is an electric bike conversion for $850 USD. It delivers a decent amount of power, it’s very easy to install, and includes a wealth of features that most complete e-bikes never dream of. The donor bike has to have rack mounting provisions, and a 26-inch to 29-inch wheel size, but that’s not too hard to come by. You might have to source a bike with road tires or a smooth surface, since knobby mountain bike tires won’t work well. Rather than using a single mounting point for the drive unit, the 300c mounts with the entire rack/battery assembly. This makes the motor secure from side to side, and gives it enough leverage to roll the tire. 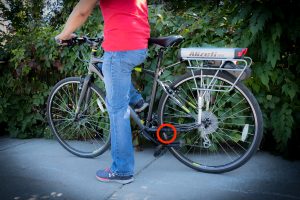 Surprising power, when it starts

To me, the 500 W motor felt like a decent 350 W hub motor. That’s saying quite a bit, given that the motor has to first go through a roller, then the tire for propulsion. One big drawback to the current iteration is pedal assist engagement. This 300c model uses a single data point for pedal assist; one magnet that passes one sensor zip-tied to the frame (circled above). This requires pedal power to pass the sensor, (one whole rotation, not one pass), and that can be a deal breaker for some shoppers. I was using a donor bike with plenty of gears, and with experience I could navigate the equipment. Simple, in practice, but the 300c isn’t peppy off the line. Alizeti is working on a more advanced pedal assist reader that will be ready “very soon.” 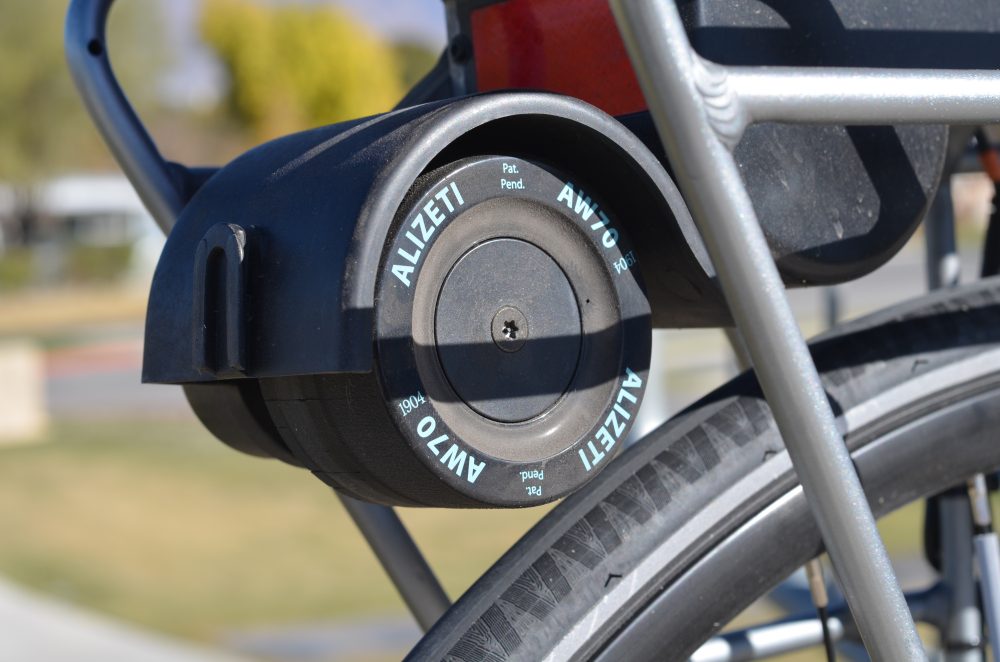 E-bikes in the rain

E-Bikes work just like regular bikes in the rain, if you didn’t already know. Friction drives have a special hurdle they must overcome: keeping appropriate friction on a slippery wet tire. Sending too much power to the roller will cause the unit to slip and spin out, effectively shutting down. Alizeti has addressed this with “rain mode.” I was extremely skeptical, so I took it out in the pouring rain to call their bluff. In normal mode, the rain caused the system to slip and spin like Charlie Chaplin playing a Harlem Globetrotter. When I switched to rain mode, Charlie hung up his shoes. I could feel the power scaled down a bit, but the tension remained and the 300c performed in heavy rain. I was blown away. 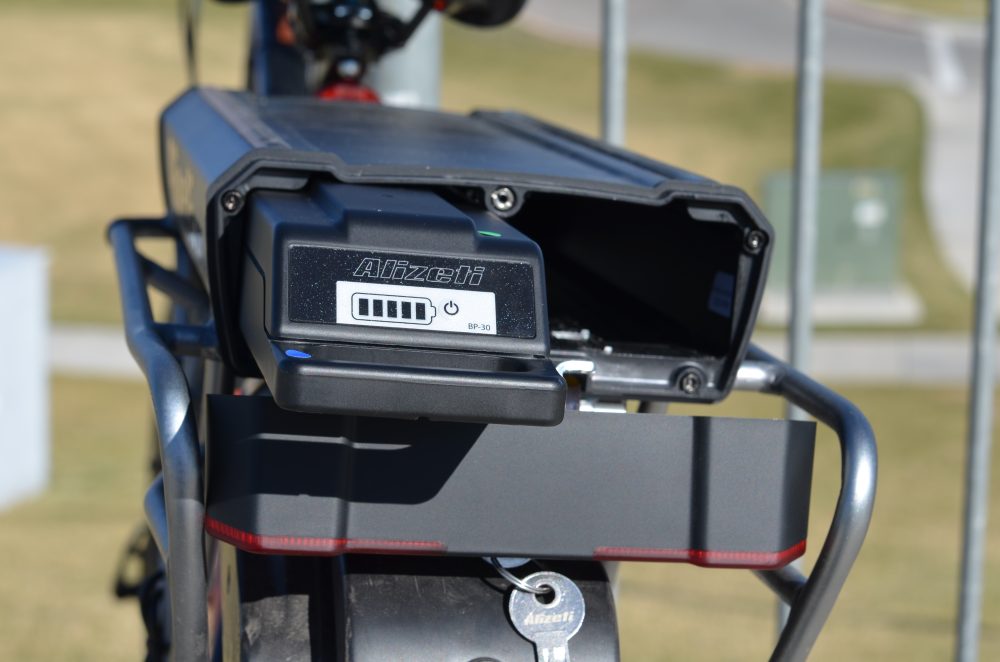 Alizeti boasts a lot of functions on the 300c (listed above), and with one exception, they work together quite well. The kit includes a front light as the back of the handlebar display, a very clever innovation I expect to see copied in the future. I like the all-in-one display unit, but the platform for pressing buttons is a bit touchy. It was a real challenge for me to operate the horn button while wearing gloves. The brake lights work with an accelerometer to engage the lights when sensing a rapid decrease in speed. This same unit also operates the motion alarm and turn signals, all based on the bike leaning to and fro. As it turns out, the turn signals are an upgrade offered by Alizeti, and for some reason my unit doesn’t have that feature. 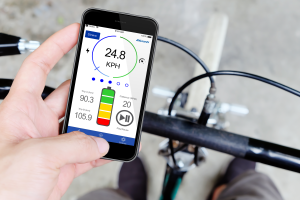 If you don’t mind replacing your abnormally worn rear tire over time, then the 300c could be useful in the long term. Using Bluetooth connectivity, the 300c can receive updates over the air, such as a Tesla or other connected device. The app also gives access to the ride app which is far more useful as a display, showing ride stats, odometer, speed, and more. There are other features that lend to progress in mind: The battery compartment can house two batteries, and the plug-and-play install can adapt to changes in the hardware (such as improved pedal assist). Alizeti is going all in, and they believe this unit will be so well received that word will spread and average riders will take notice of a once dismissed drive mode. What do I think? 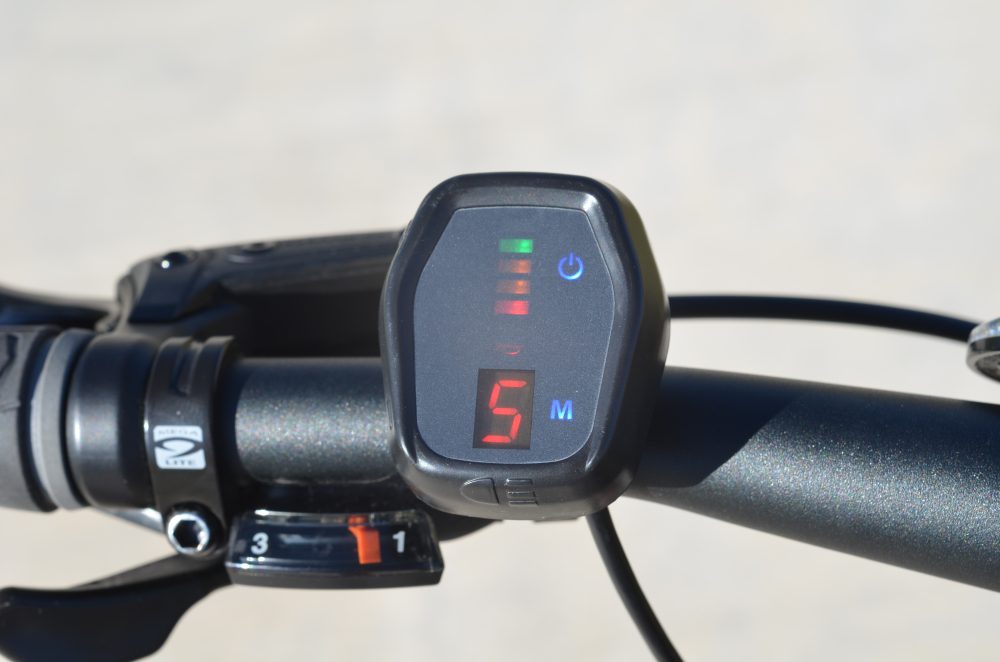 As a kit, the Alizeti 300c is alright. Power output is perfectly fine for light hills and mild commutes of about 24 km (15 miles), and the all-in-one features really save the day. Still, there are other kits out there with larger batteries, larger motors, fairly easy install, no additional wear on your tire, never slip in the rain and still operate as class 1. On top of that, many systems have currently available upgrades for power, battery life, throttle, and even open source connectivity. The Alizeti 300c isn’t intended to be the end-all solution for E-bikes, or even E-bike kits. But it works in its place, and that is a huge improvement over other friction drives. 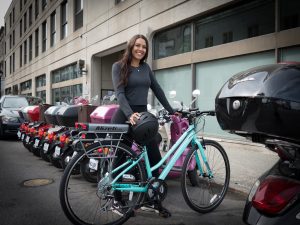 To me, the Alizeti 300c proves the friction-drive concept as a viable competitor with other electric bike kits. If you have a decent bike you want to recycle, if you like the challenge of building and fixing your own system, if you want to spend a bit less on parts, then a kit can certainly work for you. If these don’t apply to you, then should look at a complete electric bike. It will cost more, no doubt about that, but you’re getting more valuable assets than turn signals. If you have the big bucks for a brand-name e-bike, you’ll have access to a wide network of service, wildly more resale value, and peace of mind that no conversion can offer.

What do you think? Alizeti is a hungry enough company that they will likely read each of your comments below. I doubt they will take over the e-bike market, but I think they will dominate the friction-drive market. To stay up-to-date on improvements to the system, such as the pedal assist sensor, check out Alizeti’s site here.