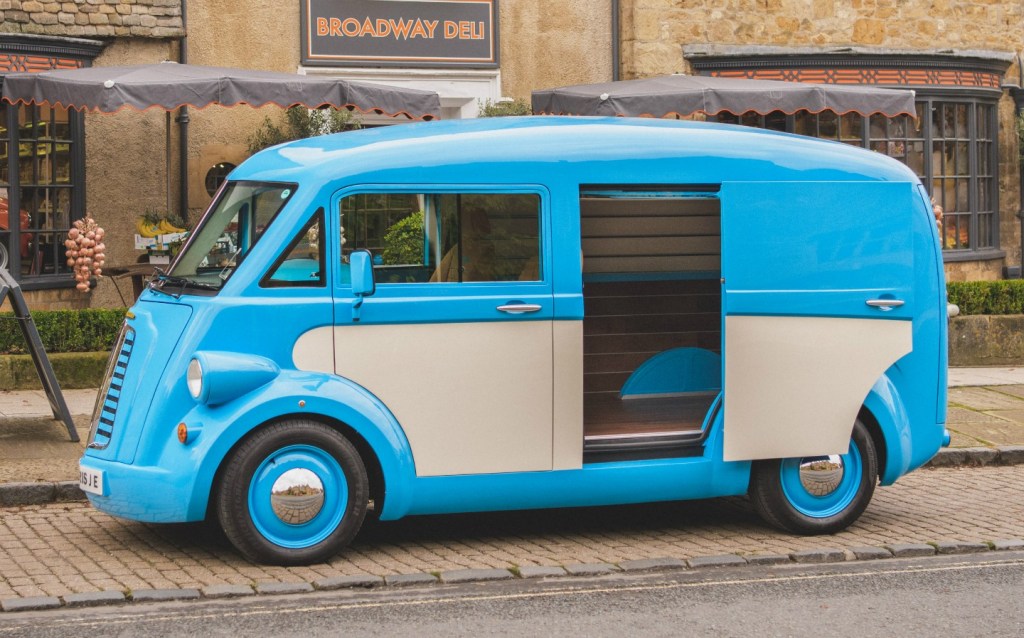 The Morris JE, a reimagining of the mid-20th-century British Morris J-type van, will debut next year. The electric van is pricey, but with incentives, nostalgic features, and hopefully quality, it will definitely turn heads.

The Morris JE is expected to enter production next year and will feature a 200-mile range, 194 feet of cubic capacity, and a 2,200-pound payload capacity. The JE is Morris’ launch vehicle, even though Morris played an important role in postwar Britain and beyond. The word “icon” is bandied about way too much, but this van truly fits the bill.

The Morris J-type was first unveiled at the 1948 Commercial Motor Show at Earls Court, London, and went into production the following year. Embraced by the Royal Mail, milkmen, bakers, department stores, and many other trades, Morris claims, “To this day the J’s volume to footprint ratio has not been surpassed by any commercial vehicle.” The Morris J-type was replaced by the Morris J4 in 1961.

Morris brings us up to speed on the beloved van’s revival as the JE:

In 2017, the drawings for a new Morris JE were started. The popular Morris Commercial J-type was going to be re-born, bringing its iconic design into the 21st century with cutting edge technology. The project has been a well-kept secret during the development phase which has resulted in a prototype. All of the development has been carried out in the UK with the help of industry experts from across Europe, with the headquarters and production to be based in the UK. The team behind Morris Commercial is now ready to bring the all-new Morris JE to the market.

The Morris JE’s body, revealed last year, will be constructed of carbon fiber — thus making it one of the lightest commercial vehicles on the market — and have a li-ion battery in the floor. It will retain the original pear-shaped grille and the curvy body. Driver and passenger seats and the steering wheel are soft-touch leather, and the back is lined in wood. It has two large opening rear doors and a sliding side door. It also features a high-resolution infotainment system that includes navigation, multiple parking cameras, and other functions.

But… there’s the cost. The JE van will start at £60,000 ($78,000). So chances are the Royal Mail won’t initially be ordering thousands. However, as Electrek reported last week, the British government’s “green industrial revolution” has an electric vehicle plan, which includes £582 million ($771 million) in grants for those buying EVs. The British government will be phasing out the sale of petrol and diesel cars and vans by 2030.

Yes, we know this isn’t a brand-new debut — but the government EV incentives might move the goalposts for the Morris JE in terms of sales and popularity. We don’t yet know how many Morris JEs are going to be made. But Morris has a lot of history and goodwill in the UK, so it’s going to have a special appeal for a niche market.

Sure Ford, Nissan and others are building electric delivery vans at scale, but will they have the charm of one of these? The VW ID Buzz also will spark nostalgia, but not like the Morris JE. Will these come to the US? Check out the J1772 plug receptacle at 20 seconds in the video above for a tease.

This van will turn heads, and I can see it being used by eco-friendly, luxury heritage brands, for example. It’s beautiful without being ostentatious. So with the new EV incentives, it just may sell better than originally anticipated. Oh and there are more than a few form factors planned, including pickup and microbus. Meet the whole family: