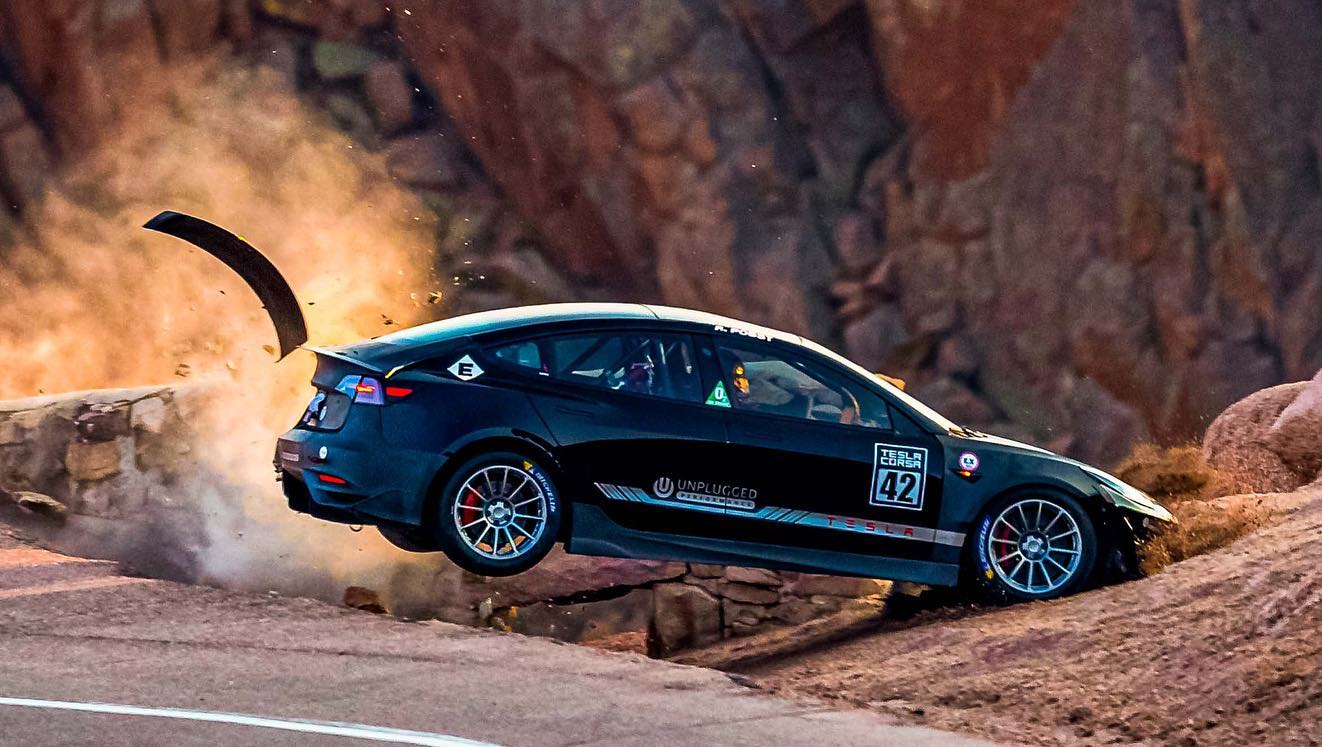 Unplugged Performance’s Tesla Model 3’s crashed during practice at the Pikes Peak International Hill Climb. The driver Randy Pobst (a professional race car driver) is A-O-K and was not treated for any physical injury. The specially tuned Model 3, unfortunately, didn’t fare as well, and there’s a rush to repair the car and get back into the race.

As the car approached a section of high elevation upper track nicknamed “Bottomless Pit,” a small bump became the demise for this Model 3. Pobst, the driver of the Model 3, is familiar with both the car and the bump on the track. Pobst worked as a consultant for Tesla, helping the automaker tune the performance version of the Model 3. Unfortunately in the case of the Unplugged Performance Tesla, the mood in the air may have been what led to the bump.

If you had read previous articles, you may have heard of the lap time record this Tesla clenched at Laguna Seca. In a similar fashion, during qualification laps yesterday (4:15 seconds), the Tesla performed extremely well, right on track for their goal to win the exhibition division. Pobst feeling comfortable with the car and gleaming with excitement from the amazing performances was poised to take on the upper section.

Unplugged’s Tesla smashed into a stone bride that keeps drivers from plunging to their death. After that, it ricocheted into the gravel ditch nose first up to the berm for a total of about 10 yards.

A quick assessment of the damage done to the Model 3 is as follows: bottom of the rear shocks blown out, wheels bent and blown, the rear subframe is bent, rear-drive unit was caved in, rear driver door damaged, rear driver quarter damaged, the front end is smashed, rear brakes lines torn off, and most likely the control arms are torn. As the car reaches its service destination, more damage is bound to be assessed.

Pobst and the Unplugged racing team are hoping they can recover or find some way to get the car running and return for the main event on Sunday. It is a matter of money and logistics, so they are keeping a glimmer of hope that it will come together.

After the incident, which may knock Unplugged out of the race this year, the last Tesla Model 3 still running is driven by Blake Fuller of Electric Performance. Expect more updates as the race continues.