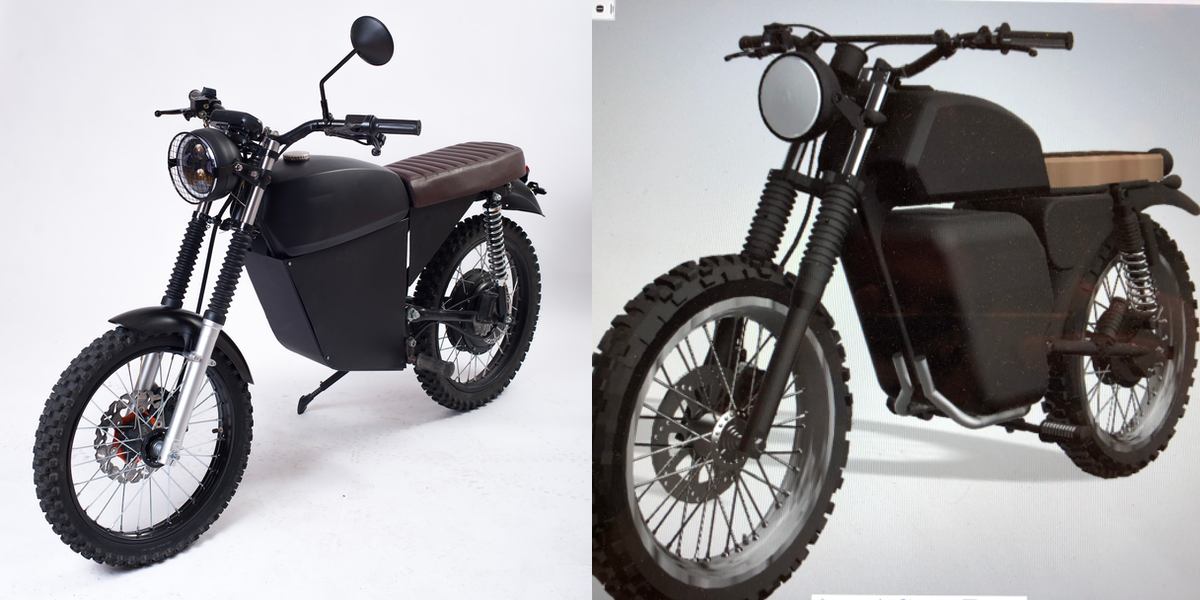 A few weeks ago. I covered the launch of a new electric motorbike known as the BlackTea Moped. While I was generally positive about the design, the one area I dinged the new bike on was the unimaginative battery box.

But now BlackTea has responded by sharing details on a new design upgrade that marks a definite improvement in the bikes’ lines.

The BlackTea Moped is a 50 mph (80 km/h) electric motorbike that is more of a “noped” than a moped due to its lack of pedals.

The bike houses a 1.76 kWh battery back and has room to add a second battery pack in the box, effectively doubling the range from 70 km (43 miles) to 140 km (86 miles), measured at mixed city speeds.

The original battery box it sported when we first saw the unveiling used a set of flat black panels that hid the frame members and didn’t seem to match the otherwise impressive retro-aesthetic of the bike.

The new battery box design uses an enclosed box that sits within the frame members, showing off the modified wishbone frame.

As Viktor explained in a recent update:

“As you can see the new box will have soft edges and it does not hide the frame anymore. With the additional pipes under the box, the motorcycle gets a real vintage look but is still minimalistic. In the next few weeks we will finalize this design, decide how the batteries will be placed inside and decide on the manufacturing process.”

As we previously reported, the electric BlackTea Moped is currently being funded by a crowdfunding campaign on Indiegogo, where supporters can back the project and pre-order a BlackTea Moped. The price had been discounted to €2,290 ($2,700), but with over 200 bikes sold, the early-bird pricing is gone and the current discount is €2,690 ($3,170).

The BlackTea Moped has long since reached its funding goal and will now presumably be heading to production, which the company estimates will be completed in time for an April 2021 delivery. And since the team is German, we’re assuming they’ll stick to the schedule.

Viktor shared more details about upcoming production planning and considerations for passing homologation certifications in Europe and the USA:

For legal street use in Europe, we have to pass different tests and then we get the “Go” from the KBA (“Kraftfahrt-Bundesamt”), so that we can start producing. Generally, type approval is required before a product is allowed to be sold in a particular country/ Europe. The cool thing is that some non-EU members accept the EU-Homologation, for example Switzerland or the United Kingdom. That is why we can cover most European countries with one type approval process.

In the US, this process is different and is called “Self-Certification”: Self-certification is the process by which the manufacturer (BlackTea) internally validates that a vehicle meets the regulatory requirements. It is not necessary that witnessed testing be conducted by a government authority like in Europe. The Federal Motor Vehicle Safety Standards (FMVSS) sets those legal requirements for the U.S. market and it is our job to meet all criteria with our bikes.

Fortunately, by passing the type approval for the EU, we can already meet most requirements for the US market. The German technical provider (TÜV) is very professional and will check with us which modifications have to be made so that we can also sell in the US.

I really like the BlackTea Moped. In fact, my loyal readers will likely remember that I actually liked this bike so much that I pledged on Indiegogo to pre-order one of the first bikes.

I’m not saying that anyone else should do that — I know I’m taking a risk by backing a new company. But I like the looks of the bike enough, and I’m still reeling from missing out on getting a deeply discounted ONYX RCR two years ago, that I jumped on the discounted BlackTea Moped pretty quickly.

The updates to the battery box are promising, and it seems like they fixed the only problem I had with the bike. I know there’s a lot of work left to do with production and homologation, but the team seems to have a well laid-out timeline that isn’t overly optimistic with an unrealistically early delivery date. So I’m cautiously optimistic about my prospects here.

The hard part now is just waiting until April!