These UK parents created a ‘wind farm’ at 10 Downing Street 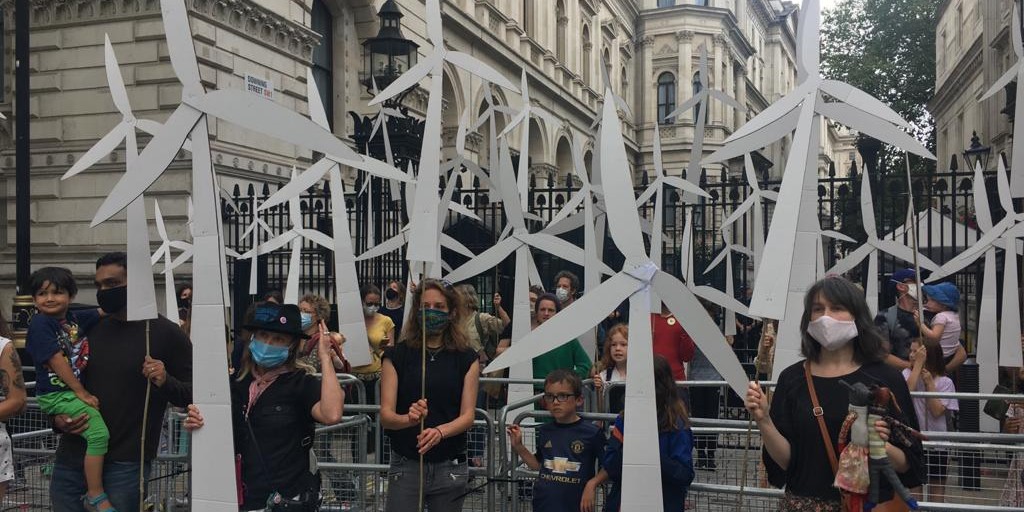 On Sunday, parents involved in Mothers Rise Up and Parents for Future UK gathered outside 10 Downing Street, the British prime minister’s residence (pictured above). They held wind turbines to symbolize the low-carbon pandemic recovery they want.

The letter asks Johnson not to “build our way out of one disaster by supercharging the next.” The letter states:

Millions more decent jobs could be rapidly created across the UK through a nationwide program of insulating homes, installing electric vehicle charging  points, re-establishing woodlands, and boosting the rollout of renewable energies.

As economists, business leaders, scientists, actors, faith and belief leaders, charity leaders, trade unionists and educators and above all as parents, we are committed to playing our part. But we need your leadership to spearhead the changes that are needed. We need a commitment that public money will not be used to bail out high carbon industries, but invested in building a thriving, fair and low carbon economy that will put the UK at the forefront of a post COVID-19 recovery.

Investing in a low-carbon recovery makes sense whether you are worried about the economy or the environment. The two are inextricably linked.

There has been a lot of pressure on the British government recently, from corporations to environmental groups to everyday citizens, to firmly build green energy into the UK’s pandemic recovery plan.

In February, the UK moved its ICE car sales ban forward to 2035 from 2040, and the country is actively pursuing renewable energy incentives such as wind. The National Grid is expecting at least 3GW of new wind and 1.4GW of solar every year from now until 2050.

The UK electricity grid’s carbon emissions could turn negative by 2033 if carbon capture technology and green energy is used, the National Grid said today. The country needs to keep this momentum going.