Taiga is unveiling today two cheaper versions of its Orca electric jet ski as the electric watercraft space is starting to take shape.

We have been following Taiga Motors, a Montreal-based startup, for years now.

In 2015, the company spun out of McGill’s racing team where the three co-founders, Paul Achard, Gabriel Bernatchez, and Sam Bruneau, worked on electric powertrains during their engineering studies at the university. They have been focused on developing a lineup of electric snowmobiles.

We tried their first prototype in 2018, and they unveiled their production lineup last year. Later, they leveraged their development of electric snowmobiles to build an electric watercraft: The Taiga Orca.

The watercraft was impressive with a 23 kWh battery pack, which is enough for about two hours on the water. Its electric powertrain generates over 134kW (180hp) and can achieve a top speed up to 104km/h (65 mph).

While the specs were impressive, the price was high, starting at $24,000.

Following a “strong response”, Taiga has now decided to offer cheaper versions of the watercraft:

“Propelled by the strong response to its electric snowmobiles and premium Founders Edition electric watercraft, Taiga Motors is launching two new electric personal watercraft (PWC) Orca models starting at $15,000 USD. The Orca ‘Sport’ and ‘Performance’ models are an important next step in Taiga’s roadmap towards accelerating sustainable exploration of the great outdoors for all. Designed from the water up, these models redefine the recreational watercraft experience with silent operation, leading power to weight, hassle-free ownership, intelligent connectivity, and competitive pricing.”

In order to start at $7,000 lower, Taiga has configured the watercraft with a 90 kW and a smaller 20 kWh battery pack.

Here are a few new pictures of the jet ski-like craft:

Taiga CEO Samuel Bruneau commented on the announcement of the new versions:

“It is exciting to see the intensive R&D behind our electric platform accelerating the rollout of new models. Alongside this, we have made great progress with our manufacturing partners to introduce Orca models at a lower price point sooner than expected,”

The company aims for the first Orca Sport and Performance model deliveries to begin summer 2021 through its dealers, and they can now be pre-ordered online with a $100 USD deposit.

Here are the specs for all the different versions of the Orca: 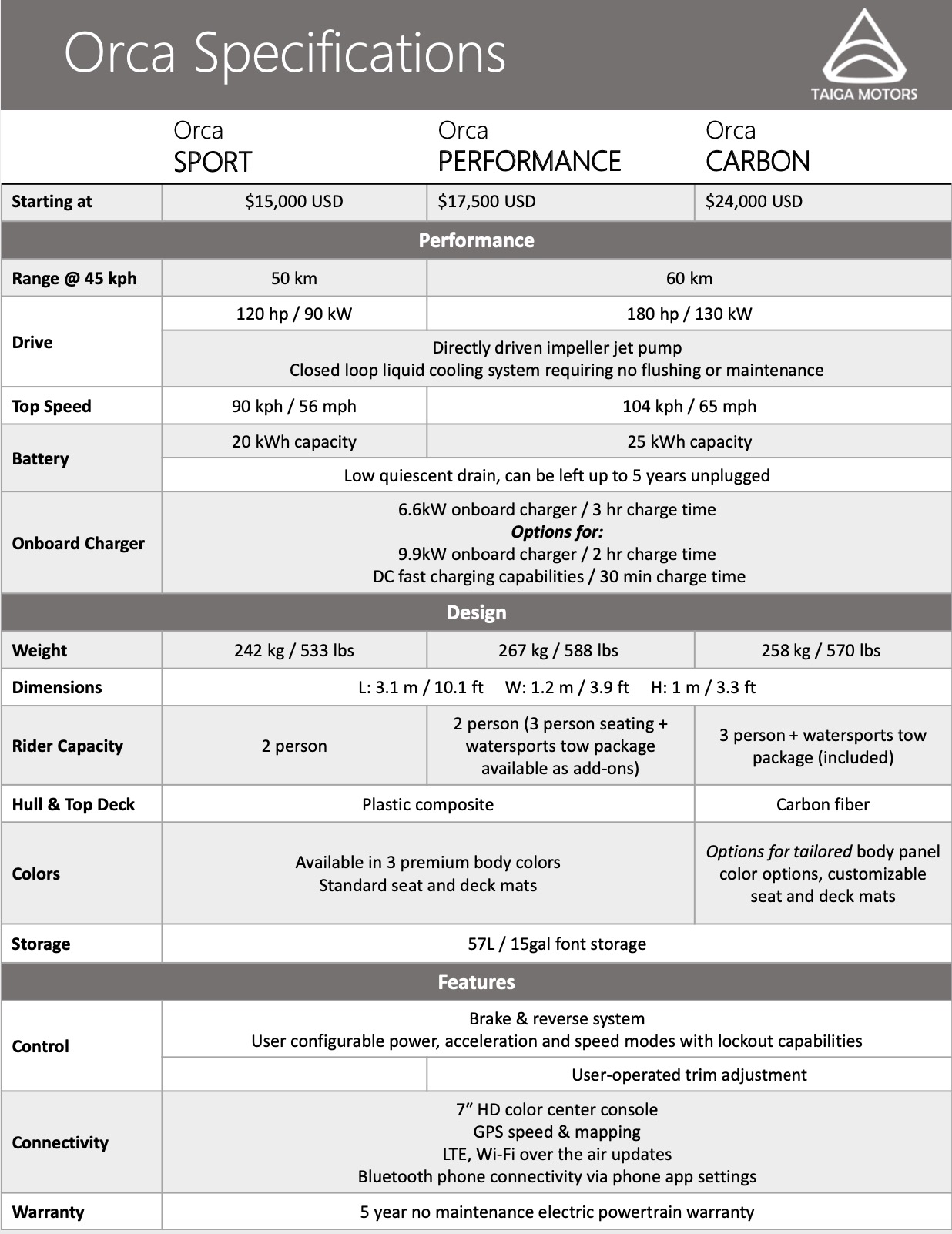 We are starting to see the electric watercraft to take shape, but it is still a very expensive space.

This is a step in the right direction, but you can still get a brand new Sea-Doo for $9,000. However, the Orca is going to be much cheaper to operate, and I am certain it will find buyers who want to move away from smelly gasoline and loud engines on the water.

I am going to test out the Orca when I get back to Quebec soon and I’ll have more to report then. In the meantime, stay tuned for our upcoming review of the YuJet Surfer 24 mph electric surfboard — another fun electric watersport vehicle.