EGEB: Rooftop solar in the US and Europe is down but not out

European and US rooftop solar — state of play

European and US rooftop solar sales are projected to drop by 30% this year due to the pandemic, according to global energy research and consultancy company Wood Mackenzie. But solar energy firms are finding resilient ways to adapt, and ultimately, solar will prevail.

Watch the Reuters video below for an explainer on what’s changed, how companies have adapted, and where rooftop solar is going in the future:

We at Electrek are delighted that there are even plans on the table at the US federal level, and should Biden win the presidency, the new administration can hopefully hit the ground running to implement a plan.

(And for those who may think we’re being politically biased, there simply is no climate-change plan coming from the Republicans, apart from planting trees.)

The Democrats’ plans are broad, but they’re a good start. We of course particularly like the significant investment in green energy. We’d like to see a stronger push toward moving entirely to electric vehicles, though, the way that the UK is moving to all EVs, as ICE new-car sales are banned from 2035.

The Washington Post released an op-ed yesterday titled, “Democrats are getting ready to govern responsibly on climate change.” The title implies the WashPo finds the plan favorable overall. But it would like to see nuclear power kept in the conversation and a carbon tax play a more prominent role. You can read the entire op-ed by clicking on the link above, but here’s a sample of what its editorial board wrote about the plan:

Democrats deserve credit for listening to scientists on the level of ambition needed, and they have not surrendered to the left flank of the debate, refusing, for example, to strike nuclear power from the conversation. Moreover, the threat of climate change is so large that even second-best policies are better than nothing. But should he have the chance to govern, Mr. Biden should still aim higher than second-best. 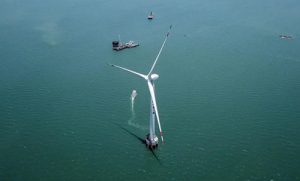 China connected a 10MW offshore wind turbine to the grid yesterday — the country’s largest wind turbine to date. The turbine is at Xinghua Bay Wind Farm Phase II off the Fujian province.

Dongfang Electric Corporation’s prototype offshore anti-typhoon wind turbine unit is about 115 meters above sea level, installed. It has a rotor diameter of 185 meters and can provide power to 20,000 households annually.

Once Dongyang is satisfied with the prototype’s performance, it will mass-produce and install more of them at Fujian’s offshore wind farms.