VW to develop its own operating system but dodges question about ID.3 software

After months of reports that Volkswagen was struggling with software problems, the company announced today that it will develop its own operating system and software platform. Christian Senger, chief executive of VW’s Car.Software organization, said the move would apply the innovation seen in smartphones to Volkswagen automobiles. But concerns about software on the ID.3 were not addressed.

Senger’s comments, delivered as an online slide presentation, suggested that Volkswagen’s existing digital structures rely too heavily on multiple third-party providers rather than a unified in-house team. He said:

We need to transform from a company that mostly writes specifications to a company with skills, employees, and talents who want to develop more software themselves. This is why we are building the car software organization as an agile software company, especially tailored to the requirements of innovative software development.

In a follow-up roundtable, Senger was asked if the software problems with the ID.3 effectively been resolved, and if there has been any impact on the ID.4. Senger cleared his throat and replied:

We are at the forefront and starting a very forward, unique solution that software becomes its own product in the automotive industry. We are moving away from a software project as part of a vehicle program into a software product, which is permanently developed. So it’s not that we always create a new software system from the ground upwards when there’s a new vehicle.

He continued with a similar word salad but did not mention the ID.3 or ID.4. After the call, we inquired further and were told that the new software strategy focuses on “iterations and continuous improvements,” and not needing to develop new software for every new model line. The question at hand was left unanswered.

Earlier, Senger said that about half of VW’s new software organization would be based in Europe, primarily in Germany, with another 30% of the team located in China. The remaining developers and executives will be spread throughout the world, in North America, India, Israel, and other locations. There will be 5,000 employees on the unified software team by the end of 2020.

“By 2025, we want to increase our own share of our cars’ software to 60%,” said Senger, in a press release. That’s right. VW’s road map will take about five years to complete so that all of VW’s millions of cars will operate on the same cloud-based platform, using software created by the company.

The “evolutionary” transition will start in 2020 with VW’s electric MEB platform, followed by the PPE EV architecture in 2022, before rolling out to all platforms by 2025.

“There will be one software stack for all vehicle platforms in the group,” said Senger. In other words, rather than each VW brand, including Audi and Porsche, having its own software development and systems, the Volkswagen Group would rely on a singular digital business unit.

Nonetheless, VW’s operating system will be flexible, with VW “joining the Linux community,” according to Senger, suggesting the use of that open-source operating system as the backbone. Brands will be given some “leeway” and to deploy certain functions such as using Android in some markets. Here’s a low-resolution (sorry) screenshot from the presentation. 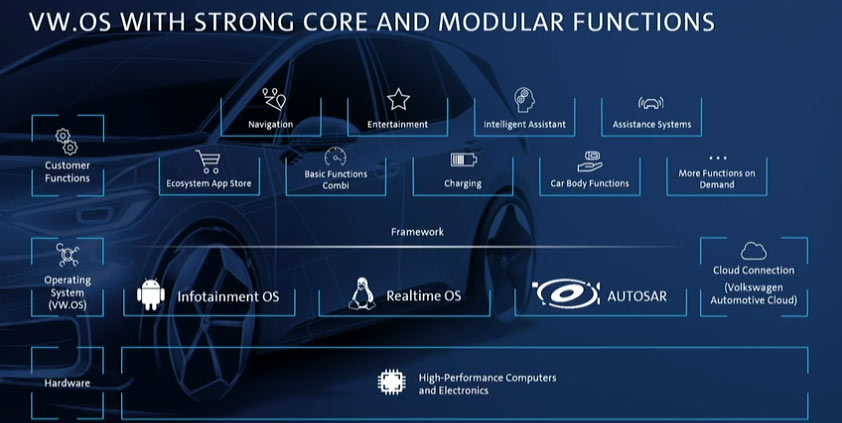 In a scripted Q&A after Senger’s presentation, a moderator asked about Tesla’s decisive lead in software. She asked, “There are already automotive OEMs that successfully pursue a software-centric approach. Tesla, for example, is often mentioned. Why are you so confident that Volkswagen will be at least as successful?

Mechanical engineering has a cycle time of two years to five years. Now when it comes to software, we are talking two years to two weeks. Is it possible to handle this by the same management team? Usually, it’s quite hard.

So by installing the software organization as really our own company and we can define our own set of rules, which gives our people full focus on software, allowing them to use their tools, helping them establish their own collaboration systems and so on. And this gives us the best starting chance.

The event gave little indication of what its new software strategy would mean for specific vehicle features beyond the standard functions like navigation, routing, infotainment, and over-the-air updates. Senger said:

Thanks to the automotive cloud, our cars will always be digitally up to date. Our automotive cloud is ready to go. We have successfully developed the technological base for the MEB and the end-to-end connection for data exchange between vehicle and cloud.

Right now, we are developing additional customer-centered functions. We are planning to bring the automotive cloud online this year. The start is pure tactical data exchange. Customer functions will follow.

Volkswagen is very late in taking a software-first strategy. It’s halfway through 2020, and VW is still talking about “the start” of making software central to car functions, with a five-year timeline to implement the plan fully.

There are also big questions about where the world’s software expertise resides. VW was one of the first car companies to have an innovation center in Silicon Valley. The center there was created to tap into talent in the world’s software capital. But today’s presentation was about bringing software development in-house, primarily in Germany.

Today’s presentation was about setting out a future strategy rather than reporting on what has been accomplished or what is happening today. That speaks volumes.